For the last two or three years I’ve been paying Time Warner for the fastest, triple-speediest, most supersonic wifi you can get. The pitch says it can deliver speeds up to 300 mpbs (megabytes per second), but whenever I’ve done a test on speedtest.net the counter averages roughly 72 mpbs. Which is pretty fast and all, but less than a third of the speed TW is promising at the maximum. Speeds vary according to this and that variable, of course. Tonight I was told by a TW rep that the modem/router I’m using — a Motorola Surfboard # SBG6580 — can only deliver speeds up to 100 mpbs. “You’re kidding,” I said. I was told to take this puppy down to the local TW office and switch it out for an Arris Wowser # TG1672G, which can deliver speeds up to 300 mpbs. So for the last two or three years I’ve been working at slower speeds than I could have enjoyed because I was too lazy to inquire. Brilliant. My name is Jeffrey Wells but my secret name is Seymour Butz.

Three days ago a nattily dressed David Bowie offered a fine impression of a guy not dying from cancer. Consequence of Sound has posted photos taken of Bowie on Friday, January 8th — his 69th birthday and the release date of Blackstar, his final album — by longtime photographer Jimmy King. The site says these are Bowie’s final known photographs prior to his death last night. 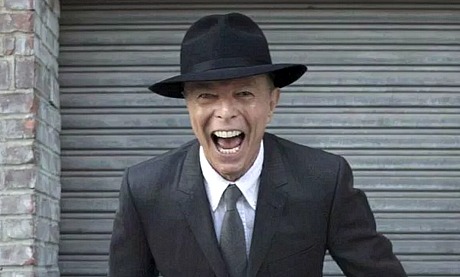 There’s one thing that needs attention in Michael Bay‘s 13 Hours: The Secret Soldier’s of Benghazi (Paramount, 1.15), the Benghazi action thriller that screens tomorrow night with an embargo date of 1.13. And that is how much attention and cred will be paid to an alleged “stand down” order given to six military contractors from a Benghazi station chief named “Bob.” Bay’s film is allegedly non-political, but a 1.9 N.Y. Post story by Reed Tucker reports that the contractors who spoke to Mitchell Zuckoff for his book “13 Hours: What Really Happened in Benghazi,” on which the film is based, say the stand-down order “happened.” This conflicts with the 2014 findings of a Republican-controlled House Intelligence Committee, which was that “there was no intelligence failure, no delay in sending a CIA rescue team, no missed opportunity for a military rescue, and no evidence the CIA was covertly shipping arms from Libya to Syria.”

The final ballot for Broadcast Film Critics Association’s Critics Choice Awards, which will happen next Sunday (1.17) at 5 pm Pacific with a live broadcast on A&E, Lifetime and Lifetime Movie Network, will be sent on Wednesday, 1.13. Fast turnaround. If (and again I say “if”) the BFCA hands their Best Picture award to The Revenant or a Best Director trophy to Alejandro G. Inarritu, it will be hard to deny a feeling of creeping uncertainty about Spotlight‘s inevitability. It wasn’t just The Revenant‘s Golden Globe wins but also the surprisingly large weekend take ($39,826,840) that may be giving pause to more than a few BFCA voters. Back in the early ’90s it was said of a prominent production executive that he was “a man with your opinions.” I’ve long suspected that more than a few BFCA-ers like to raise a damp finger to the wind before voting. Wednesday’s vote will be a test of that.

Any serious journalist given a shot at interviewing El Chapo (a.k.a. Joaquín Archivaldo Guzmán Loera) would snap it right up. The honest ones would admit that, at least. So the criticism directed at Sean Penn’s 11,000 word Rolling Stone piece about his secret softball encounter with this infamous Mexican drug dealer boils down to the fact that he didn’t man up and ask tough questions. But how tough would any journalist be under similar circumstances? I’m asking.

A paragraph in Penn’s article indicates that his apparent motive for not doing a Mike Wallace-style interview ((apart from the fact that he hasn’t the training or the temperament of a journalist) stemmed from concerns about possibly getting whacked.

“The trust that El Chapo had extended was not to be fucked with,” Penn writes. “This will be the first interview El Chapo had ever granted outside an interrogation room, leaving me no precedent by which to measure the hazards. I’d seen plenty of video and graphic photography of those beheaded, exploded, dismembered or bullet-riddled innocents, activists, courageous journalists and cartel enemies alike. I was highly aware of committed DEA and other law-enforcement officers and soldiers, both Mexican and American, who had lost their lives executing the policies of the War on Drugs. The families decimated, and institutions corrupted.”

I was getting that sinking feeling toward the end of season #3 of House of Cards. Robin Wright had decided to leave Kevin Spacey alone in the White House, but that didn’t mean she would soon be trying to take him down — her character is too classy and reserved and “loyal” for that kind of behavior. And so I was getting this shitty feeling that the story was feeling less decisive and a lot less interesting than it did during season #1 and #2, and that another season was in the offing because the producers decided they could get it away with it. I felt I was being led along. No more dragging stuff out!

9 Comments
A Guiding Spirit In Our Celestial Pool…Gone

Tell me you don’t see something a little Pans Labyrinth-y in David Bowie‘s appearance in this “Lazarus” video, a cut off his final album, “Blackstar.” How many people are buying/downloading “Blackstar” right now? (I’m one of them.)

David Bowie has been right down inside me since the early ’70s, but never so profoundly as during a moment at the 1992 Cannes Film Festival. A no-big-dealer that became a kind of wake-up and a comfort blanket. I was standing on a small, sloping beach outside a party that was starting to slightly settle down, and the DJ played “Fashion” and suddenly it all came together — the night, the mood, the tempo of the times, the shallow-ironic cultural attitudes of ’92 — and began to make my blood feel a bit richer and livelier.

David Bowie saw and touched and assimilated just so. He seemed to get the whole equation like no one else. These and other thoughts were swirling around in my head that night, at that very moonlit moment, and I whispered to myself “Wow…so awesome to have Bowie with me now.” 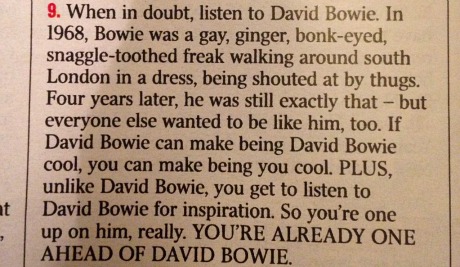 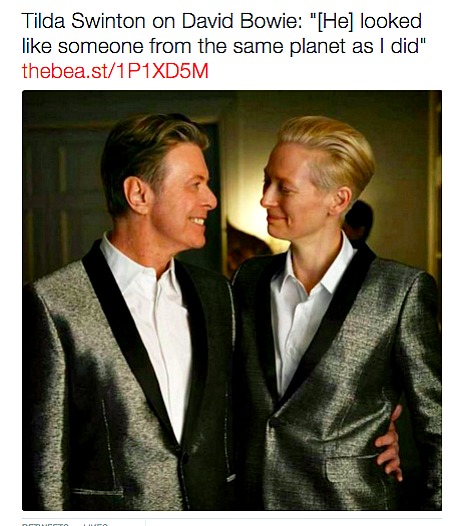 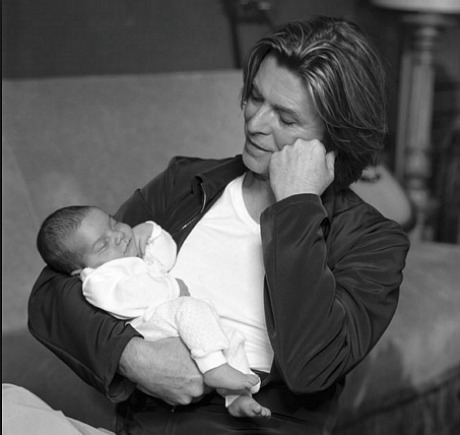 Urban Dictionary: “Describing a female with a delightfully sweet bosom; a delicious pair of breasts.” I had never heard the term “sugartits” since reading that a drunken Mel Gibson used it to address a California Highway Patrol officer in 2006. I haven’t used it on my own in any context since, not even in air quotes. But I’d be lying if I said I’m sorry that the term is with us, now and forever. It’s so Malibu, so AA, so…fascinating.

David Bowie is dead…good God! A major-league, avant-garde artist in music for several decades and, for a while, film. Particularly The Man Who Fell to Earth and Merry Christmas, Mr. Lawrence. An artist-rocker-maestro-writer-performer extraordinaire has slipped beneath the waves. This is like losing Paul McCartney or Bob Dylan or Mick Jagger. Cancer took the 69 year-old Bowie earlier today. I’m trying to think of my quintessential default David Bowie song, the one that I listen to more than the others, and it’s a six-way tie between “Fashion,” “Starman,” “Five Years,” “Suffragette City,” “China Girl” and “Beauty and the Beast.” Let’s make it an even seven by adding “Let’s Dance.” I can’t recap Bowie’s decades-long career at 12:10 am — too vast, too extensive, too many chapters. I saw him perform his Serious Moonlight tour at Anaheim Stadium in ’83 or thereabouts. I used to play “Under Pressure’ over and over again in the early ’80s when I lived in the West Village. Oh, to have attended an early ’70s performance of the Ziggy Stardust tour when Bowie had his glam space suits and red-rooster hair. Too much to remember, too much to take, and too damn melancholy. I need to sleep on it. The world is a slightly lesser place tonight.