Tonight Alejandro G. Inarritu became the first guy to win two back-to-back DGA awards for Outstanding Directorial Achievement in Feature Film — Birdman last year and now The Revenant. My insect antennae vibrations are hummin’ like the Lovin’ Spoonful, and despite what Sasha Stone and other Big Short die-hards are saying, hanging on to a frayed-sewing-thread hope that Adam McKay‘s film might still have a chance, all the flashing signs in the Hollywood Elsewhere universe point to a Revenant vs. Spotlight showdown for Best Picture. McKay had to win tonight and he didn’t, and in my mind that means The Big Short is a dead…okay, a bleeding deer in the snow. The stubborns are insisting otherwise. Preferential schmeferential…the Big Short egg fell off the wall tonight and broke on the pavement, and the yoke and clear goo and eggshell fragments are soaking the stones and the mortar. Note from a friend: “The DGA is an interesting choice and yes, Inarritu will likely win a second Best Directing Oscar but Best Picture is still very much up in the air because of the preferential ballot. In that scenario, The Big Short still won. The DGA does not trump PGA for Best Picture.” Note from friend #2: “It’s not The Big Short that’s out of the Best Picture race but Spotlight. McCarthy needed to win tonight for his film to have a chance.” 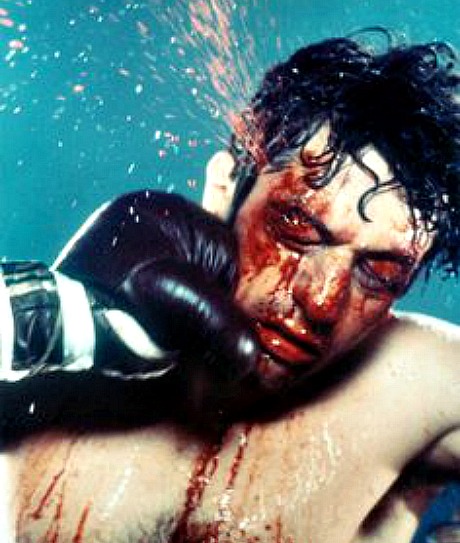 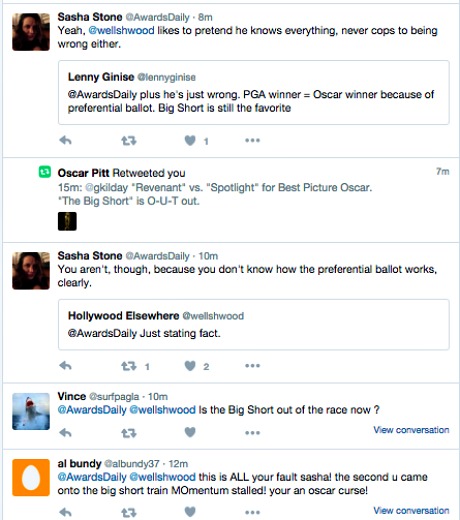 “In 2008 Hillary was running against the Tulip Craze Barack Obama. Now she’s running against a grumpy gramps, a stooped socialist with a narrow message, brusque manner and shaky grasp of world affairs.

“And she’s still not likable enough for the young women who were supposed to carry her forward as a Joan of Arc. According to an NBC News/Wall Street Journal/Marist poll, Sanders won among young men and women in Iowa by 70 points. And in New Hampshire, going into the weekend, polls showed him leading with women, racking up yawning margins with women under 45 and with both sexes under 30.

“Hillary is traveling around New Hampshire with a former president who could easily layer in some poetry, and a handful of specific snappy plans for the future, to her thicket of substance and stack of white papers. But somehow, Hill and Bill campaign side by side without achieving synergy. Is it that he’s as tired as he looks or does she feel too competitive with him to ask for that kind of help?

“As one Hillary booster in Hollywood marveled: ‘There’s no chance her husband doesn’t understand the problem. The look on his face during her speeches evokes a retired major league All Star watching his son strike out in a Little League game. This is so fixable.’

Seasoned visitors to the Santa Barbara Film Festival and particularly those staying at the Hotel Santa Barbara or SB Holiday Inn learn soon enough to avoid State Street as they walk up to the Arlington theatre for the nightly tribute. That’s because dozens of homeless people, sitting on State Street benches, will hit you up for change (“Hey, brother!”) or admonish you for not smiling broadly enough as you pass by (happened to me last night), or will demand that you identify your political persuasion (ditto). The smart visitor walks up Chapala or Anacapa Street.

7 Comments
This Is It

If Big Short helmer Adam McKay wins the DGA’s Outstanding Directorial Achievement in Feature Film award tonight, the Best Picture Oscar race will almost certainly be over — The Big Short will take the big prize on 2.28. And if McKay doesn’t win, The Big Short, which won the Producer’s Guild Daryl F. Zanuck award a couple of weeks ago, is probably fated to lose.

If Mad Max: Fury Road‘s George Miller wins it (which I’m kinda hoping for on some level & which more than a few are predicting), whoo-hoo for George…but it won’t necessarily mean Mad Max: Fury Road is likely to take the Best Pic Oscar. (Although it could.) It’ll mainly mean George is respected, that he delivered a superb action epic, that the DGA membership liked the idea of George winning rather than The Revenant‘s Alejandro G. Inarritu taking it for the second year in a row, etc.

If Inarritu takes the the DGA award, the odds will heavily favor his melancholy pain poem winning the Best Picture Oscar…but not 100%. It could still be a split vote with AGI winning the Best Director Oscar and Spotlight taking the Best Picture Oscar. I know that if Inarritu wins tonight, the cries heard from Awards Daily‘s Sasha Stone — a huge Big Short fan and a recent believer in its Oscar chances — will rival those of the Jewish slaves under Ramses before Moses led them out of bondage.

If Spotlight‘s Tom McCarthy wins (an unlikely scenario but who knows?), Spotlight, which recently won SAG’s Best Ensemble award, will be all but locked to win the Best Picture Oscar.

If The Martian‘s Ridley Scott wins, I will leave the Arlington theatre, jog all the way down State Street to the Santa Barbara pier and leap into the Pacific Ocean. If I don’t do this I will have sacrificed all credibility as a Hollywood columnist and should never be listened to again about anything. And if Scott doesn’t win it won’t matter because no one expects him to be the DGA champ, and I mean no one.

The critics who went all falsetto and fluttery for Hail, Caesar! live on the planet Venus, but Joe and Jane Popcorn, alas, do not. Deadline‘s Anthony D’Allesandro reported last night that ticket-buyers (particularly the over-50 crowd) mostly disliked it — PostTrak has reported that only 40% of the audience plans to recommend Caesar! to their pallies, and 52% of the over-25 male audience gave it a D-plus on CinemaScore. Pic is expected to hit $10 or $11 million by Sunday night but the verdict is in & that’s all she wrote. Caesar mortuus est. The honorable thing would be for the film to retire to its villa, slip into a hot bath, open its veins and bleed to death. (That way the families will be provided for.) I found Hail, Caesar! moderately amusing at times but mainly spotty — it never quite lifts off the ground. Did you read Richard Brody‘s New Yorker piece on it? He was grinning ear to ear, jerking himself off. I’m usually contemptuous of audience favorites, but this time I agreed. The rubes saw the truth of it; the critics processed Hail, Ceasar! quite differently. 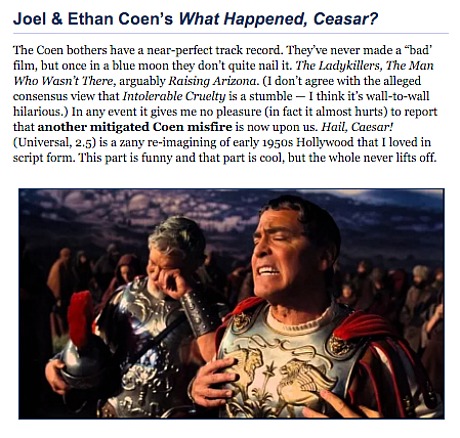 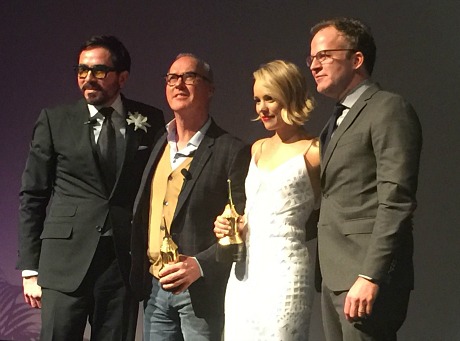 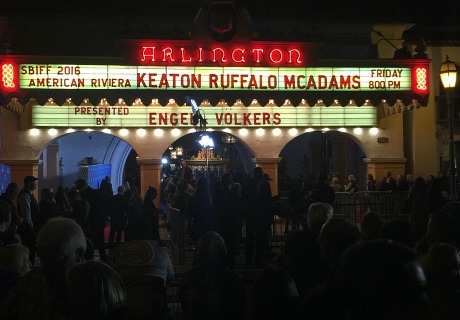