Criterion’s Bluray of Mike Nichols‘ The Graduate popped yesterday. I’ve seen it a thousand times and I already own the MGM Bluray that came out in 2011, but I bought the damn Criterion anyway because of the Howard Suber commentary track, which is one of the best I’ve ever heard on any Bluray or DVD of any film. Seriously — it’s really worth watching this film with Suber on the couch, chatting away. Just do it and you’ll thank me. 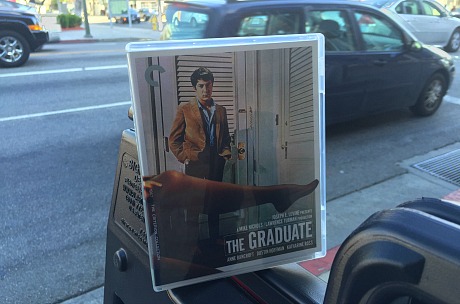 Taken today at northwest corner of Sunset and Cahuenga, just after buying the Criterion Graduate Bluray at Amoeba across the street.

“Yes, Suber’s commentary is an academic analysis, a bit dry and professorial, a formal instruction,” I wrote two or three years ago, “but it’s very wise and knowledgable, and ripe with all kinds of allusions, insights, asides and connections. Suber gently explains how there’s a lot more to this 1967 classic than just story, dialogue and performances. It’s really quite the integrated audio-visual tour de force.”

From Frank Rich’s essay in the Criterion liner notes: “The major studios all turned down The Graduate. The film was financed instead by an independent producer, Joseph Levine, who grew impatient as the shooting ran over schedule, into a fourth month. Levine exhibited scant optimism about the movie’s prospects, and some of the most influential critics, including Pauline Kael and John Simon, dismissed it, as later would a writer at the New Yorker, Jacob Brackman, whose screed went on for some twenty pages.

Before I got going in journalism I worked as a tree surgeon, in both Los Angeles and Fairfield County, Connecticut. Ropes, saddles, spikes, pole clippers, pole saws, chain saws, cables, etc. I was in my early-mid 20s and in the best shape of my life. I wasn’t a party animal but I smoked off and on, threw down a fair amount of Heineken or Coors every night and occasionally with chaser shots of Jack Daniels. And I felt great the whole time. My spiritual state was another matter.

In Los Angeles I worked for Bob, the owner of a small tree outfit. He spent most of his time meeting prospective clients and selling the work, and I was a kind of informal foreman of a three-man crew. Bob would calculate the cost of a job by estimating how much time it would take. Sometimes the job would take less time than he figured and sometimes a little more. Either way he knew we’d get the job done within a reasonable time frame.

Not long after I was hired Bob showed us a job that he figured would take a full eight hours and maybe closer to nine. “You’ve got all day,” he told me as we arrived in the early morning. “I’ll be gone until the late afternoon but if you can finish by 5 or 6 pm we’ll be in good shape.”

As soon as he left I told the other two guys, “Let’s finish this sucker as fast as we can — five or six hours — and then we’ll have a couple of hours of lying around time in the late afternoon.” We did that — busted ass, had a short lunch, managed to finish by 3 pm. We were raking up, folding the tarps and putting away the equipment around 3:15 pm when Bob returned. “Whoa…you’ve finished! Good work!” He was so pleased with our professional dispatch that he decided to take us over to another job.

“Whoa, wait…you told us this was it for the day,” I said. “Well, yeah but we can make it an even better day if we finish this other job,” Bob answered with a grin and a comradely poke. “It’ll only take an hour, 90 minutes at most…won’t be that hard.”

(More…)
February 24, 2016 1:25 pmby Jeffrey Wells
17 Comments
Rebecca Miller Is Where Lynn Shelton Was Before She Made Laggies

“Rebecca Miller’s consistently interesting films have always mixed sharp observation with a resistance to narrative formula that can sometimes feel like quirky mannerism, and that element is present in Maggie’s Plan (Sony Classics, 5.20). After moving toward romantic comedy with The Private Lives of Pippa Lee (’09). Maggie’s Plan inhabits that terrain even more assertively, albeit retaining enough offbeat qualities to avoid genre conventionality. This pleasing triangle embroils Greta Gerwig, Ethan Hawke and Julianne Moore in two overlapping relationships involving three children over three-plus years. The general lightness [of tone] lets it get away with content more clever and ingratiating than fully depthed.” — from Dennis Harvey‘s 9.12.15 Variety review, filed during the Toronto Film Festival.

The only weak aspect of Oliver’s rant is that precedents and history have nothing, repeat, nothing to do with the refusal of the Republican loons to consider any forthcoming Supreme Court nominee from President Obama. It also strikes me as wimpish that Obama is reportedly vetting Nevada’s allegedly “centrist” Republican governor Brian Sandoval as a possible nominee, presumably because it would be difficult for Republicans to dismiss him. I thought Obama was in a “fuck it, this is who I am and what I believe” mode. If it were my call I’d nominate a tough, flaming, fuck-you liberal — a Bernie Sanders or William O. Douglas type. Judiciary committee Republicans aren’t going to approve anyone he submits anyway so why try to placate them?

Disney’s decision to open Derek Cianfrance‘s The Light Between Oceans on September 2nd, or on the opening day of the 2016 Telluride Film Festival, speaks volumes. Cianfrance is a gifted and ambitious director, and it may be that Oceans will be seen down the road as a review-driven, adult-must-see — but if Disney had any faith in its award-season potential they would open it after Telluride/Toronto.

On top of which the motivation behind Alicia Vikander‘s Isabel character seems a bit daffy, as I explained in 1 12.21.15 riff.

Pic is an adaptation of M.L. Stedman‘s “The Light Between Oceans,” a 1920s period drama about Tom (Michael Fassbender), a World War I veteran and lighthouse keeper, and his wife Isabel who live on an isolated island off the west coast of Australia.

The inciting incident is the discovery of a dead man and a live baby in a boat that’s washed onto shore. Having suffered through two miscarriages and a stillbirth, Isabel decides that the baby is a “gift from God” (baby Moses found in the Nile reeds) and ignores her husband’s natural impulse to report the discovery. Reality eventually intrudes. 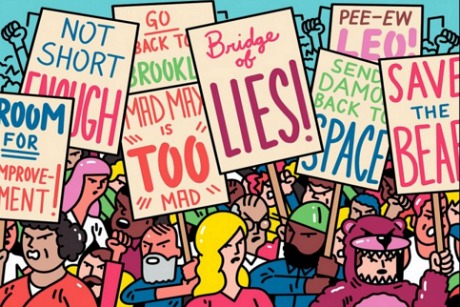 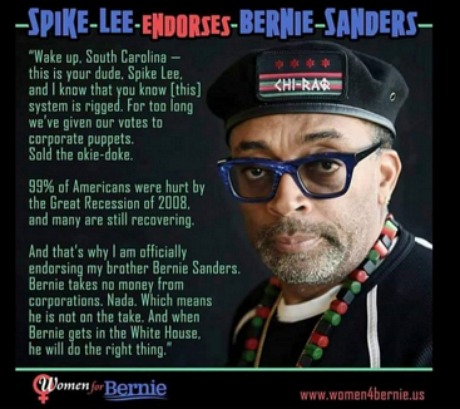