In a few days Quentin Tarantino‘s New Beverly Cinema will be screening a beware-of-Ryan O’Neal double bill — Love Story (’70) and Oliver’s Story (’78). A little more than 37 years ago I laughed at a defaced version of an Oliver’s Story one-sheet on a New York subway station wall. It won’t be very funny if I use the original graffiti so I’m going to use polite terminology. The dialogue balloons had O’Neal saying to costar Candice Bergen, “I’m sorry but may I have sex with you in a way that can’t get you pregnant?” Bergen answered, “I’d prefer another method.” I was poor and struggling and mostly miserable, but the graffiti made me laugh. I guess you had to be there. 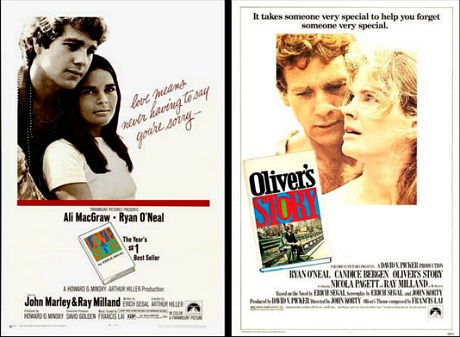 The late George Kennedy‘s peak moment (“the greatest of my life”) was winning the Best Supporting Actor Oscar for his performance as a big-mouthed convict in Cool Hand Luke (’67). He was fine in that Stuart Rosenberg film, but my favorite Kennedy performances are his police detective in The Boston Strangler (’68) and particularly his bullying, sociopathic goon who was brought down by a pack of Dobermans in Clint Eastwood and Michael Cimino‘s Thunderbolt and Lightfoot (’74). I understood Kennedy’s willingness to prostitute himself as Joe Petroni in those Godforsaken Airport sequels (Airport 1975, Airport ’77, The Concorde: Airport ’79), but doing these and other crap films diminished what he had going in the late ’60s. 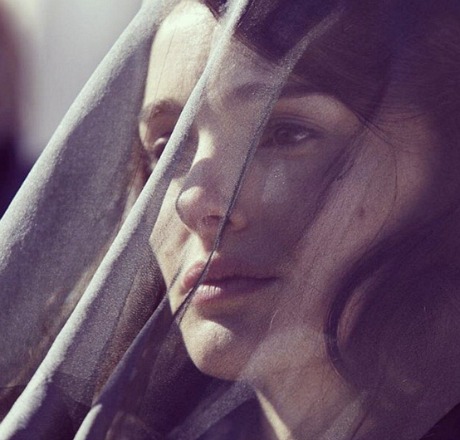 79 Comments
“…But I Imagine Certain People Feel That”

Now that Donald Trump has all but locked down the Republican presidential nomination, the “chuckling and shaking one’s head” phase is pretty much over, and the serious artillery phase is kicking in. In the past the initial response of educated people to demagogues has been to laugh or call them foolish figures, and then go “wait a minute…this guy could actually win.” Trump is nothing if not an improvisational opportunist and a lying sociopath who shoots from the hip but isn’t that hip when he shoots. John Oliver: “We have no way of knowing which of his inconsistent views he will hold in office.” I can definitely imagine Clinton-funded campaign ads like that LBJ-funded ad than ran in 64 [after the jump] — an ad featuring a sensible-sounding establishment Republican saying “look, this is just too much…this is way beyond the pale…I can’t vote for this guy and neither should you.”

I reviewed Joachim Trier‘s Louder Than Bombs nine-plus months ago at the 2015 Cannes Film Festival. It costars Gabriel Byrne, Isabelle Huppert, Amy Ryan, Rachel Brosnahan, David Strathairn and Devin Druid. The Orchard will open it theatrically on 4.8 and will stream on iTunes/VOD beginning on 7.12. I’ve posted the Cannes review twice before so here goes a third time…sorry.

This is an ennui-laden, Euro-style Ordinary People stuffed with the usual suburban, middle-class downer intrigues and featuring one of the most reprehensible teenaged characters in the history of motion pictures. To me it felt contrived and gently infuriating. Too many aspects felt wrong and miscalculated or even hateful, and once the tally reached critical levels I began to sink into my usual exasperation (faint moaning, leaning forward, checking my watch).

Bombs is basically about a father and two sons grappling with the death of their wife/mother, and the dysfunctional behavior that emerges in her absence.

Dad, a Long Island-based high-school teacher, is played by the aging, overly sensitive, watery-eyed Gabriel Byrne. Son #1, a mild-mannered college prof and mystifyingly irresponsible young dad, is played by Jesse Eisenberg, wearing a bizarre straight-hair wig instead of his usual curlies. Son #2, the above-mentioned demon from Hades, is played by Devin Druid. Isabelle Huppert plays the dead wife/mom — a renowned, N.Y. Times-endorsed war photographer who died some months ago in a local highway accident.

Big Short director Adam McKay, co-winner of Best Adapted Screenplay Oscar, ended his acceptance speech with the following: “Most of all, if you don’t want big money to control government, don’t vote for candidates that take money from big banks, oil or weirdo billionaires…stop!” This wasn’t a “subtle” jab at Hillary Clinton, who has reportedly accepted more than $20 million from Wall Street bigwigs in the form of speaking fees and campaign contributions — it was a very precise and clear one. As well as a Bernie Sanders endorsement. Which of course meant nothing to the low-information no-accounts.

28 Comments
Inarritu: “I Won’t Back Down”

I was hugely impressed last night by the way Alejandro G. Inarritu ignored the orchestra trying to play him off and calmly stood his ground as he spoke about racial prejudice and opportunity and the meaning of his win. This is what backbone is…the fruit of will and a pair of balls.

At the Governor’s Ball he told Deadline‘s Pete Hammond that “I hadn’t even used all my time when they started to play me off.” Co-producer Reginald Hudlin told Hammond that “it was just one mistake in a three and a half hour show.” I think it was basic cluelessness, not a mistake. Everyone knows that you cut the major winners a little slack when it comes to acceptance speeches. Hudlin and co-producer David Hill could have told the orchestra conductor to stop and let Inarritu finish, but they chose not to. Insensitive, bad form.

Sylvester Stallone‘s surprising loss to Mark Rylance at the Oscars last night was the biggest shocker of the telecast. Expectation-wise it was like being hit on the side of the head with a waffle iron. Some had predicted Spotlight‘s surprise win, but almost nobody saw the Stallone thing coming.

Obviously some sentiment or conviction kicked in that very few picked up on. But what? You can’t just bellyache — something happened.

But before floating theories, you have to watch Michael Rapaport’s reaction, which was posted late last night or early this morning or whatever.

Sasha Stone has suggested that Sly lost because (1) it was a very competitive year resulting in a split-up vote, (2) “Did the Academy really want to go down in history rewarding ‘the only white guy’ in Creed?…that’s all the press talked about…if they gave him an award, doesn’t that just seal the deal?” and (3) “A lot of old timers really liked Bridge of Spies.”

HE theories: I agree with Sasha’s thinking but I also think Sly lost some votes when he forgot to thank Creed director Ryan Coogler during his thank-you speech at the Golden Globes — I think that pushed the wrong kind of button.

I didn’t think Spotlight would take the Best Picture Oscar, but I was delighted that it did. It was a win that made a lot of people happy. Everyone I spoke to at the Spotlight after-party at Palihouse said the same thing. A few know-it-alls were predicting that Spotlight might triumph, but most were predicting The Revenant. Especially after Alejandro G. Inarritu‘s DGA win followed by The Revenant‘s BAFTA triumph — that’s when most Spotlight supporters (myself included) caved as far as our Gold Derby or Gurus of Gold predictions were concerned. No one I spoke to (or could think of) was predicting that Bridge of Spies costar Mark Rylance would win the Best Supporting Actor Oscar — everybody was assuming Sly Stallone had it bagged. Anyway, I’m done for the night. I got back an hour ago from the Palihouse party, and tomorrow’s another day. Funniest quote from a Revenant guy: “We’ve made so much money we might even break even.” Then he said as a kicker, “That was a joke.” 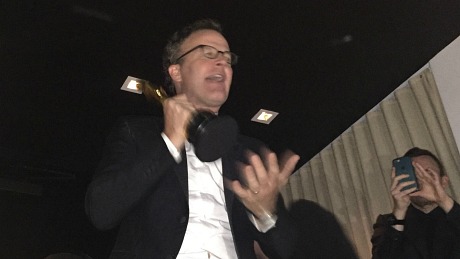 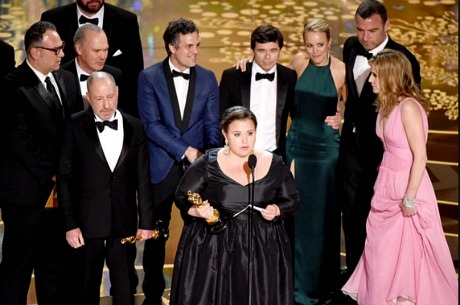