Batman v Superman: Dawn of Justice made $27 million last night (i.e., Thursday), and may be on the way to nailing $180 million by Sunday night. (Warner Bros. is projecting a more modest $110 million.) Shitty reviews never seem to matter on opening weekends, but the second weekend always tells the tale. Presumably some in the HE community caught it last night, or have just returned from a Friday evening show back east. (It’s currently 8:45 pm in Manhattan.) Please opine when you have a moment. Have the critics been too rough or generally on target?

From Anthony Lane’s New Yorker review: Ben Affleck portraying Batman is “a curious choice, especially in the light of Hollywoodland (2006), where he excelled in the role of George Reeves, who starred as Superman on TV in the early 1950s, loathed the experience, and died of a gunshot to the head. It was hardly a movie to brighten one’s faith in comic books.

“Since then, Affleck has become a director of steady and satisfying thrillers, including The Town and Argo, so why risk this backward step into the realm of beefcake? Maybe he relished the gleam of the supporting cast—Holly Hunter, Diane Lane, Laurence Fishburne, and Kevin Costner, with Amy Adams as Lois Lane, Jesse Eisenberg as a jittery Lex Luthor, and Jeremy Irons taking over from Michael Caine as Alfred, the venerable butler-cum-weapons designer to Bruce Wayne.

I never thought I’d feel compassion for Ted Cruz but today (i.e., early Saturday morning in Vietnam) I do. I’m a strong believer in the “don’t ask, don’t tell” attitudes that prevailed during the JFK administration, which was that personal foibles and failings in the sexual arena were never mentioned by reporters or political enemies. Catting around was simply off the table. Do I suspect that persons aligned with Donald Trump planted or helped to fan the thinly sourced, possibly inaccurate National Enquirer story that everyone’s on about? Almost certainly. Do I suspect Cruz is a hound dog? None of my business. But even if everyone agreed, the sense of tawdry cultural degradation would still be out there. Could the Gods have made things any easier for Hillary Clinton?

For a good 90 minutes I searched high and low for one decent color…hell, any color snap taken during the filming of Howard Hawks‘ Red River…zip. But these black-and-white candids are half-interesting. 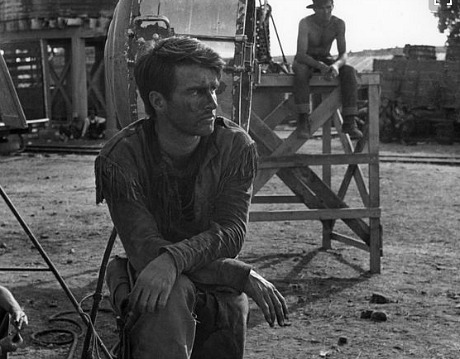 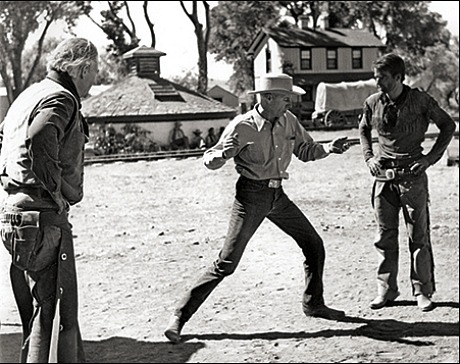 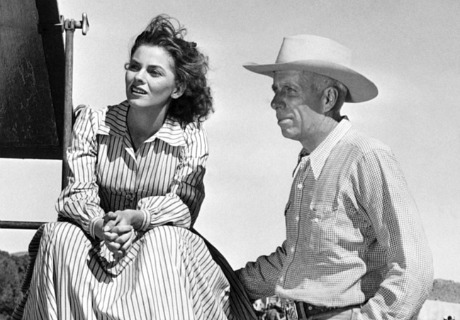 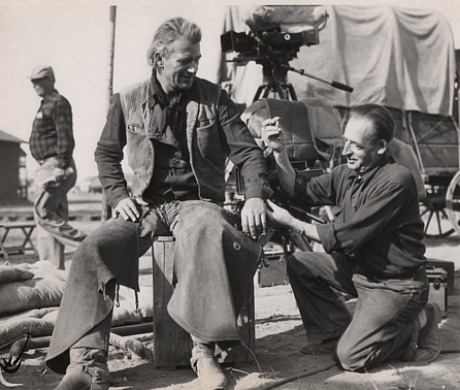 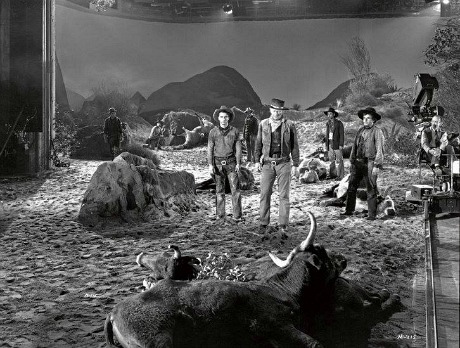 What with the Vietnam time-outs and distractions, I’ve only just gotten up to speed on the latest Trump-Cruz fight, this time about their wives. “This is the dirtiest, ugliest, weirdest…”

Who the hell drinks salt water? Who the hell sells salt water in plastic bottles with attractive packaging that suggests it’s lemon-flavored eau du mineral? More to the point, what kind of visitor would be dumb enough to buy a six-pack of this stuff without carefully reading the label? 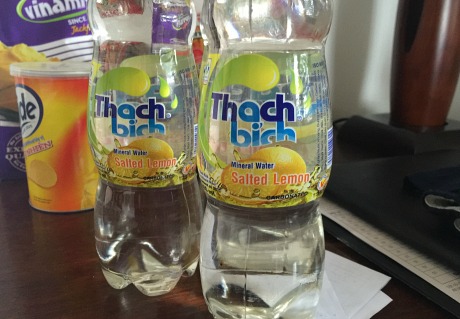 This afternoon Trip Advisor steered us to a great little gourmet restaurant called Nu Eatery, which for my money delivered the best eats we’ve had thus far. The menu is native Vietnamese cuisine, of course. Everything we ordered was alive with subtle, melt-down flavors that weren’t quite like anything I’ve had before, and served in modest portions so we didn’t feel the least bit loaded down when we left. The place itself is small — three downstairs rooms including the kitchen but with an upstairs dining area with a balcony. And no overweight tourists in shorts and sandals! Anyone planning to hit Hoi An is strongly advised to follow our lead. 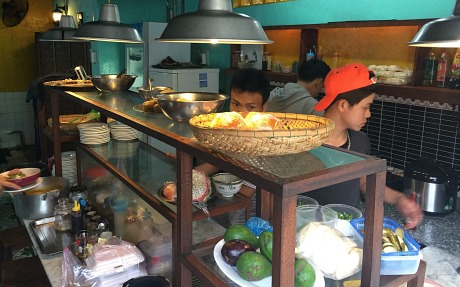 Nu Eatery is located down a small alley (10A Nguyen Thị Minh Khai) between two well-travelled streets. The chefs do their stuff in a small kitchen next to an open window. 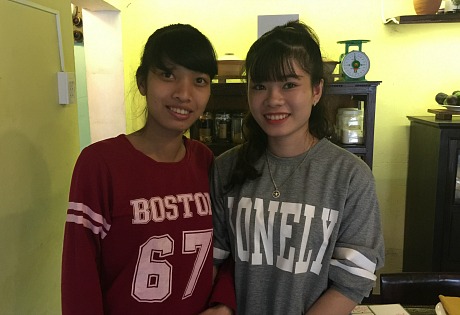 Ladies who took care of us at Nu Eatery. The LONELY sweatshirt girl was our waitress. 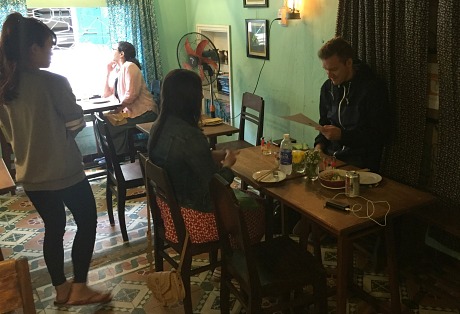 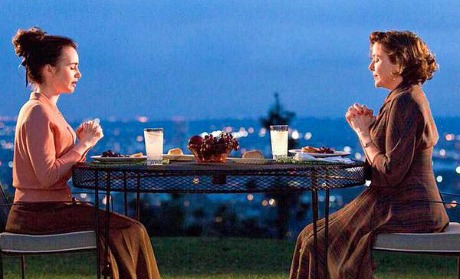 The question isn’t what heavyweight companies have declared their opposition to Georgia’s passed-but-not-yet-signed anti-gay discrimination bill (i.e., House Bill 757), but which companies haven’t declared. Those who’ve issued statements against the bill include Disney/Marvel, Open Road, Sony, the Weinstein Company, Time Warner, Viacom, Lionsgate, 21st Century Fox, AMC Networks, Starz, Intel and — note the irony — Dow Chemical and the NFL. Faucet Craftsman’s Ron Bouchard: “When the NFL is ahead of you on human rights, you’ve got bigger problems.”

I love the term “American biographical criminal comedy.” Todd Phillips‘ film is about the real-life saga of arms dealers Efraim_Diveroli (Jonah Hill) and David Packouz (Miles Teller) who ran afoul of the law five or six years ago for selling crap-level arms to the Afghan army. Based on Guy Lawson‘s “Arms and the Dudes: How Three Stoners from Miami Beach Became the Most Unlikely Gunrunners in History“. (The third dude, Alex Podrizki, has apparently been eliminated for the sake of narrative efficiency.) War Dogs was originally slated to open two weeks ago (3.11.16) but will now open on 8.9.16. I’m relieved that Hill reverted to his Superbad weight to play Diveroli (according to the Wiki page); otherwise his performance might not have been believable.

Garry Shandling launched in the late ’80s with It’s Garry Shandling’s Show, but he owned the ’90s by way of The Larry Sanders Show, which ran on HBO from ’92 to ’98. I lived through that landmark show. The satirical, self-regarding tone was always stinging and razor sharp and comfortable as fuck. And now Shandling’s gone — abruptly dead from a heart attack at age 66. It’s 4:30 am in Vietnam and I have to try and get at least some shut-eye, having awoken at 1 am and stayed that way for three hours (don’t ask), but this is truly sad news. From the mid-Reagan era to the late Clinton years, Shandling captured and lampooned American culture by marrying it to his own anxieties and neuroses and then tickled it just so. I loved his wit and his somewhat aloof, lonely-guy attitude about things. (Shandling had relationships but never married.) I’m among the few who really loved portions of Town and Country, the commercial disaster in which Shandling played Warren Beatty‘s BFF. (They were offscreen pals back then.) Shandling and Beatty had an appealingly loose bro vibe in that film that made me smile. I’m very sorry Shandling has left so early, but for roughly a 12-year period he held mountains in the palm of his hands.