Luca Guadagnino‘s A Bigger Splash (Fox Searchlight, 5.13) is a noirish Mediterranean hothouse thing — a not-especially-sordid sex and betrayal story that builds so slowly and languidly it feels like there’s nothing going on except for the vibe, and honestly? It’s so lulling and flavorful and swoony and sun-baked that you just give in to it. The undercurrent is…well, gently mesmerizing, and that was enough for me. I can’t wait to see it again, or more precisely go there again. I felt like I was savoring a brief vacation. I’m not saying the dramatic ingredients are secondary, but they almost are.

The title comes from a David Hockney painting, and that in itself should tell you where Guadagnino is coming from. A Bigger Splash is about island vibes and coolness and louche attitudes and to some extent the splendor of the druggy days, and particularly the legend of the Rolling Stones.

This is Guadagnino’s second collaboration with Tilda Swinton after I Am Love, the Milan-set family drama that opened seven years ago, and the newbie is…I don’t what it is exactly.

In my mind the island of Pantelleria, which is halfway between Tunisia and the southwest coast of Sicily, isn’t just the setting but a kind of lead character. It colors and tonalizes and blows little mood gusts.

So Devin Faraci‘s 3.31 report about Suicide Squad doing extra shooting to add “more humor and lightness” is incorrect, according to a tweet posted by director David Ayer this morning. And yet additional shooting has occured, according to costar Jai Courtney. His comment to Entertainment Tonight: “I wouldn’t say we’re trying to make it funny…there’s some additional action stuff that we’ve been doing that’s pretty dark.” HE comment #1: The Suicide Squad trailer footage has been fairly arch and meta-jokey so it seems unlikely that any kind of additional material would be “pretty dark.” Faraci wrote that “[they’re] not inserting jokes left and right but that they’re beefing up fun character moments and interactions.” HE comment #2: With Suicide Squad not opening until 8.5.16, Warner Bros. will presumably be carpet-bombing with promotional materials for the next five months…right? I’m already half-sick of this thing.

If Bernie Sanders hadn’t decided to run for President against Hillary Clinton, the despair and depression out there right now would be overwhelming. Heroin use would be three or four times what it is now. Sanders will not win the Democratic nomination but he’s ignited fresh political kindling, a communal sense that “the old ways are only going to keep pushing us down so we have to get rid of them,” and a belief in fundamental fairness and corporate pushback that never would have happened if Hillary had run more or less unchallenged. She’s a smart, driven, reasonably decent person whom I intend to vote for in the fall, but she’s a corporate player who is glomming on to the Sanders spiritual wave because it benefits her campaign. God knows what she’d be saying or proposing (or what she’ll try to do as President) if Sanders hadn’t come along. Sidenote: Documentarian Matthew Cooke smiles and nods too eagerly when Mark Ruffalo is expressing a thought. Tone that shit down.

Who will historians point to 100 or even 80 years hence, when the waters of the Hudson and East River will have begun to lap onto the streets of Manhattan, as the most rancid and villainous figures of early 21st Century culture? Indeed, who at the moment of their deaths are sure to be seized by feral, growling, sharp-clawed demons and plunged into the hottest caverns of hell? Climate-change denialists, for openers, but even more deserving of damnation will be the anti-climate-change propagandists. And so I dream of Sarah Palin, naked and howling and roasting on a spit. But with her glasses on. Palin and her ilk just keep coming, keep spewing. Not God Herself nor the wonders of all creation will get in their way. 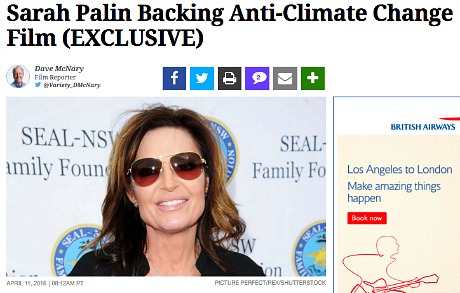