Support on Patreon Follow @wellshwood
22 Comments
When You Just Know

You can’t be a pool-playing dilletante. Well, you can but there’s nothing more depressing than realizing that you’re no better at the game now than you were at 17 or 18. That happened to me the other night. There’s only one way to play pool and that’s like a would-be Eddie Felson, like Jimi Hendrix and his guitar, like nothing else matters…every day, full concentration, serious, devotional. I used to be half decent at pool in high school. Not consistently but every now and then I would hit the balls just so. When you make a tricky shot there’s nothing like it (I used to improve after a couple of beers), and when you blow a shot it’s awful. Especially the easy ones. All my life I’ve wanted to be good enough to shoot a cross-corner like the one that Paul Newman shoots in The Hustler [below]. I’ve never come close to being that good. I know what mediocre is. I was a lousy drummer and a fourth-rate trumpet player so don’t tell me.

The Sony 4K lip-synch agony that has plagued my life for roughly a month is finally over. Really — the problem has been 100% solved. The solution was to toss the Radio Shack HDMI switcher that I’d been using, and replace it with a Marantz AV Surround Receiver NR1506. I fed the cords from the four sources — Direct TV, Oppo Bluray, Sherwood Region 2 Bluray, 4K Roku player — into the Marantz, and then sent the whole package from the Marantz into the TV (Sony 930C), which has built-in speakers plus a wireless subwoofer. (I junked the Sony sound bar.) The key element is an audio-visual command in the Marantz that accelerates or slows the sound down by milliseconds. It allows me to perfectly synch sound and image if there’s even the slightest issue. I’ve never dealt with such a difficult technical challenge in my life.  Agonizing. 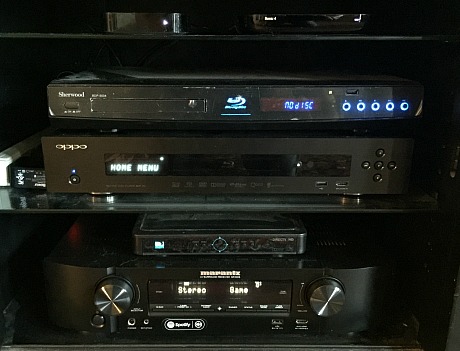 That Region 2 Studio Canal Bluray of Carol Reed‘s The Third Man (4K-scanned, released last July, derived from a recent restoration that played in Cannes 11 months ago) arrived yesterday. It’s the sharpest, most richly-hued version of this 1949 classic I’ve ever seen in my life — quite velvety and sublime. Don’t even mention that discredited grainstorm Bluray that Criterion released in 2009. A tech-savvy friend told me at the time that exquisite studio-lit compositions weren’t available to director Carol Reed and his dp, Robert Krasker, as they were working on location in Vienna, and that rougher, grainier images were therefore inevitable. Bullshit. 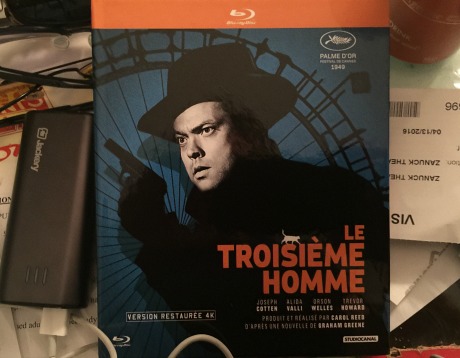 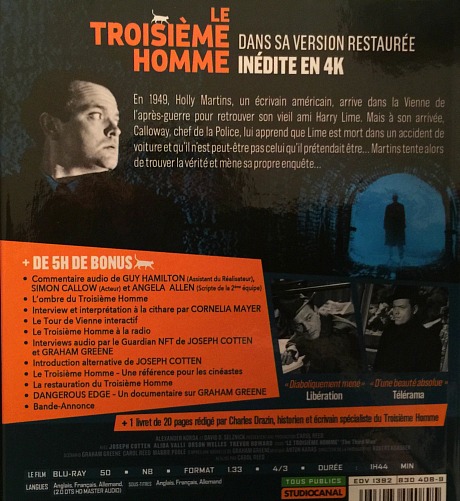 I’ve made it quite clear in this column that I wouldn’t touch LSD (lysergic acid diethylamide) these days with a 10-foot pole. But back when I used to touch it I would always describe what it did to my brain as a kind of blissful washover that freed me from everything I’d learned in school and thereby delivered radiant truths. The usual mental associations and thought patterns were rescrambled by my senses turning all tingly and Technicolored — an elevator-in-the-brain-hotel sensation leading to heightened sensitivity, receptivity. Which led to the opening of Dr. Huxley‘s doors of perception and the gates of prana, satori, nirvana. 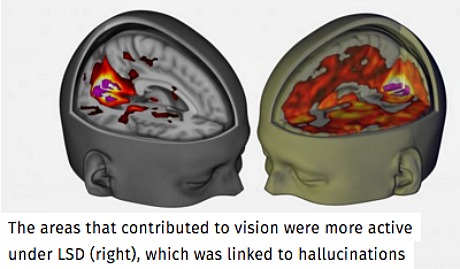 Four or five days ago researchers from London’s Imperial College, working with the Beckley Foundation, published for the first time in the history of LSD visual records that precisely show the effects of the drug on the brain. Here’s a PDF with the findings.

The team administered LSD to 20 “healthy” volunteers and then used various brain-scanning techniques to visualize how LSD alters the way the brain works. For the first time in history the images depicted the ch-ch-ch-ch-changes that that people have sought to verbally describe for decades.

Dr. Robin Carhart-Harris, from the Department of Medicine at Imperial: “Normally our brain consists of independent networks that perform separate specialized functions, such as vision, movement and hearing — as well as more complex things like attention. However, under LSD the separateness of these networks breaks down and instead you see a more integrated or unified brain.

“Our results suggest that this effect underlies the profound altered state of consciousness that people often describe during an LSD experience. It is also related to what people sometimes call ‘ego-dissolution’, which means the normal sense of self is broken down and replaced by a sense of reconnection with themselves, others and the natural world.

“This experience is sometimes framed in a religious or spiritual way, and seems to be associated with improvements in well-being after the drug’s effects have subsided.”

Filed from Park City on 1.25.16: “This is a sentimental, briefly stirring, Braveheart-like attempt to deify a brave African-American hero — Nat Turner, the leader of a Virginia slave rebellion in August 1831. But a black Braveheart or Spartacus this is not. Nor is it, by my sights, an award-quality thing.

The Birth of a Nation (Fox Searchlight, 10.7) “will almost certainly be Best Picture-nominated, as it delivers a myth that many out there will want to see and cheer. But don’t kid yourself about how good and satisfying this film is. It’s mostly a mediocre exercise in deification and sanctimony. I loved the rebellion as much as the next guy but it takes way too long to arrive — 90 minutes.

“Nate Parker, the director, writer and star, sank seven years of his life into this film, and invested as much heart, love and spiritual light into the narrative as he could. But the bottom line is that he’s more into making sure that the audience reveres the halo around Turner’s head and less into crafting a movie that really grabs and gets you, or at least pulls you in with the harsh realism, riveting performances and narrative, atmospheric discipline that made Steve McQueen‘s 12 Years A Slave an undisputed masterpiece.

Three days ago it was reported that Variety‘s longstanding TV critic Brian Lowry has taken a new media writer gig at CNN. Six days prior (4.6) it was announced that Variety film critic Justin Chang will leave to become Kenneth Turan‘s heir apparent at the L.A. Times. These follow last July’s decision by chief film critic Scott Foundas to take a new gig with Amazon. The old Variety guard…adieu!

Variety‘s film editor Claudia Eller is “interviewing outside candidates,” according to a Penske Media employee, but right now the trade is without a top-dog, marquee-brand, NY-or-LA critic to shoulder the domestic burden.

The exodus (“if that’s the word,” cautions a Variety staffer) started when Derek Elley, David Rooney and Todd McCarthy were let go by the old Reed Business regime in 2010.

After Foundas left for Amazon Variety interviewed a fair number of critics, including a couple of big names, but didn’t hire anyone, probably figuring Chang would be happy to do all the big films. Now with Chang off to the L.A. Times they’ve got no one.

It seems doubtful that their Paris-based critic Peter Debruge will return to fill Chang’s shoes, having only been in Paris for a couple of years. There’s also the London-based Guy Lodge, of course, but right now the stateside ranks are thin.