I’ve just received a late ’15 draft of Aaron Sorkin‘s Molly’s Game, an adaptation of Molly Bloom’s same-titled 2014 book about running the hottest 20th Century poker game in Hollywood (the one that Leonardo DiCaprio, Tobey Maguire and Ben Affleck frequented) until she was popped by the government for some infraction. The film is a go with Sorkin directing. Jessica Chastain will play Bloom and Idris Elba will play her attorney. I’m thinking about reading the Sorkin during this morning’s train ride to Cannes, but I’m also looking to read Tully, the new Diablo Cody-Jason Reitman project. If anyone can pass this puppy along…thanks.

I somehow missed the 5.4 announcement about Variety‘s hiring of former Entertainment Weekly critic Owen Gleiberman as their co-chief film critic in New York. Sharing co-chief status is Peter Debruge, who’s returning from Paris to review out of Los Angeles. Serious congratulations and particularly to Owen, one of the most highly charged and insightful critics around, and one of my personal favorites for the last 25 years. Owen and Peter will be reviewing at the Cannes Film Festival starting tomorrow (i.e., Wednesday). Will they be attending tonight’s La Pizza journo-critic dinner in Cannes? The odds are 70-30 favoring.

Yes, Hillary has it wrapped up. Yes, even though Bernie is ahead of Hillary in six of the nine Democratic primaries yet to come, he can’t beat or outflank her. But…but. The statistics are real — they don’t lie. There is ample data to suggest Bernie is the most favored candidate among Americans. Hillary’s favorables have fallen over the past six months, and Bernie’s have risen. I know, I know. It’s over, Hillary wins, shut up. I’m not disputing the likelihood of Hillary’s Philadelphia triumph, and I’m not saying she won’t beat Trump handily. But polls say Bernie can beat him by a greater margin. So I’m not shutting up about Bernie. Listen to last night’s Michael Moore interview with MSNBC’s Chris Hayes and [after the jump] an analysis of the situation by The Young Turk‘s Cenk Uygur.

37 Comments
I Don’t Get The Hell Thing

Obviously I’ll feel like hell if I watch this film next fall, but I really don’t get what the big threat to humanity amounts to. A “switch”, a map of Hades by Dante, a big blood flood, possible extinction…and only Tom Hanks has the smarts and the instincts to get to the bottom of it all. Aw, hell…help. On top of which I always seem to have problems with films set in Firenze (i.e., Florence). Okay, with the exception of A Room With A View. I can’t say I’m especially enamored of Firenze itself. I’ve been there twice — way too many fat, sandal-wearing tourists off the bus.

Speaking of vigilante murder and unseen art, this cover of Kino’s forthcoming Bluray of William Wellman‘s The Ox-Bow Incident (7.12) is fairly striking. And unusual — Henry Fonda‘s bearded face has always been used in previous posters or DVD jackets. It seems to have been taken from a vintage early ’40s movie poster. The same art was used for the German Bluray but rendered with a mix of faded color and sepia. 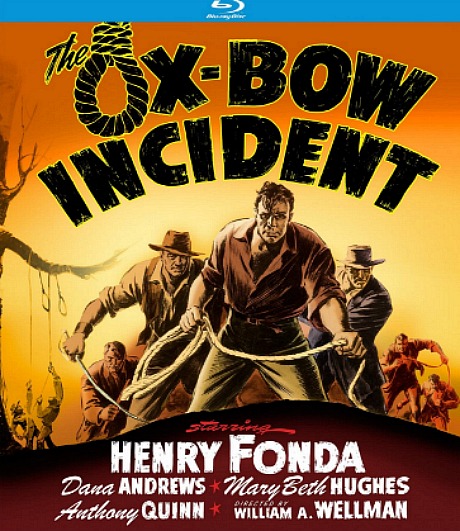 When I posted HE’s 160 Greatest American films last summer, I ranked The Ox-Bow Incident at #120, just after Mean Streets and just before Scarface. Which means nothing. I could wake up tomorrow and rank it at #27 or #48 or #73.

Watching and reviewing All The Way the other night led to some web-surfing about the civil rights struggles of 1964, which in turn led to a Norman Rockwell painting that I’d somehow never seen before. It’s a depiction of the infamous Mississippi murders that year of three civil-rights workers (James Earl Chaney, Andrew Goodman, Michael Schwerner). Called “Murder in Mississippi” or “Southern Justice”, it appeared in Look magazine. I’ve never thought of Rockwell as a painter as much a gifted illustrator with a sentimental streak. (A painter friend derided Salvador Dali as “Norman Rockwell on acid.”) So yes, it’s an illustration, but an exceptional one. Those shadows sink right in. (Note: Chaney is on his knees because he’d been savagely beaten before being shot.) 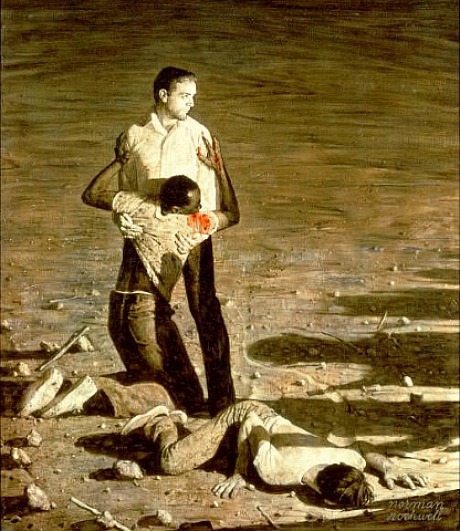 11 Comments
Approval Above All

This Kristin Bell interview with YouTube’s Sam Jones posted a month ago, but it was just referenced yesterday in a 5.8 Jessica Contrera piece in the Washington Post. My respect for Bell just shot up 100% for having admitted to Zelig issues. Question #1: I understand that having a Zelig complex is something a person would need to work on, but how exactly does that connect with anxiety, depression and a Serotonin-imbalance? In Zelig therapist Mia Farrow never recommended medication when she was treating Woody Allen with this disorder. Question #2: What’s with the music on the soundtrack over the last 20 seconds? It suggests a lack of respect for Bell, and obviously indicates that the producer of the piece felt that what she was saying wasn’t quite enough. The woman is baring her soul and you need to jazz up the ending?

I’ve been caught up in such a dismissive attitude about The Nice Guys that I didn’t even look at the latest trailer. Out of boredom I just did. I have to admit that it looks marginally amusing. I somehow didn’t understand until now that Ryan Gosling is Stan Laurel to Russell Crowe‘s Oliver Hardy, and I don’t mean that in more ways than one. Gosling’s Lou Costello to Crowe’s Bud Abbott…whatever. Director-writer Shane Black went to the moon to get all the period details right. All except one — nobody wore Yasser Arafat hipster beards in the late ’70s. That look didn’t come in until the GQ/Miami Vice thing took off in the mid to late ’80s.

A few hours ago someone at Turner Classic Movies tweeted the below photo to promote a showing of Michelangelo Antonioni‘s L’Avventura. Someone with the attitude of a Polyanna or a huckster, I should say. Or who just doesn’t know the film. Monica Vitti and Gabriele Ferzetti appear to be lovers who’ve found happiness. Their characters’ relationship in this 1960 classic is about anything but that. L’Avventura is about wealthy Italians wandering about in gloomy ennui, anxious and vaguely bothered and frowning a good deal of the time. The movie is about the absence of whole-hearted feeling, and it never diverts from this. If there’s a moment in which Vitti conveys even a hint of serenity in her intimate scenes with Ferzetti, it barely registers. I don’t remember a single shot in which Ferzetti (who just died last December at age 90) smiles with even a hint of contentment. A publicity still, I’m presuming. 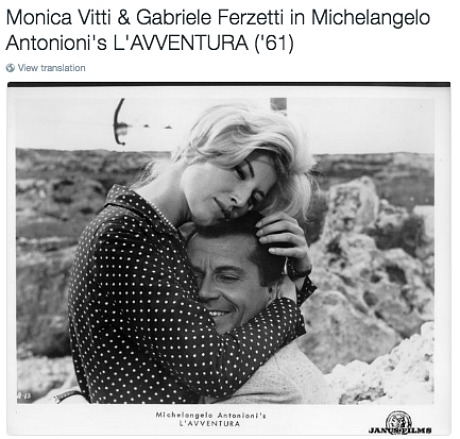 49 Comments
Socked In The Kisser

When I saw Russell Crowe slug Ryan Gosling in a trailer for The Nice Guys, I immediately presumed that Shane Black‘s action comedy is a cliche-wallower and probably dismissable for that. In my book any film that resorts to face-punching outside of a boxing ring is automatically low-rent. I’m not speaking of messy, life-like altercations (shoving, slapping, sloppy beat-downs) but clean, decisive, John Wayne-style punches. Slugging is a steady ingredient in coarse and rowdy action comedies (particularly the urban variety) and superhero films, but clenched fists and dropped opponents are largely an indulgence of hacks.

How many films directed by women have had slugging scenes? How many punches have been thrown in films of true quality other than restrained westerns like Shane and outside of boxing films (or films that included a single boxing scene like Barry Lyndon)? Punch-outs are always aimed at the apes. Did Alfred Hitchcock ever resort to one? Will Asghar Farhadi or Pedro Almodovar or Judd Apatow ever go there?

My kind of fight scene is fast and sloppy and over in five or six seconds, like that brief roadside altercation between Gene Hackman and Bill Hickman in The French Connection. Nobody ever goes down from a single punch.

Yes, right crosses and duke-outs are a fast, economical way for characters to convey anger, but they’ve become so ubiquitous that it’s hard to avoid a feeling of numbness and vague depression when they occur.

Three years ago I noted how 21st Century action films have trended in the direction of firing hundreds if not thousands of rounds, and that economical gunfire is almost always a mark of quality. (The piece was about proposing a ten-shot rule.) Today’s equation is that any face-punching outside of boxing films merits an automatic turndown. Slugging is one of the banes of my moviegoing existence, and what I mainly hate about superhero films in general.

Last night (or a few hours ago if you’re in the States) I mentioned buying a Paris-to-Cannes train ticket for 185 euros. In the comment thread Bob Strauss said “that sounds like a lot for train fare. How long is the trip? You getting a bunk or something for what, 6 to 9 hours?” Me: “It’s actually a five-hour trip and yes, agreed — the fare is high. All European train fares are pricey, and I’ve never been happy about that. And yes, I could’ve paid a bit less for a second-class seat but that’s not how I roll. (Second class is no cut-rate bargain — it’s just marginally less expensive.) But it’s still worth it and here’s why.

Agreed, a one-way Paris-to-Nice plane fare is cheaper by 30 to 45 euros. BUT the train leaves right from the middle of town (very relaxing and stress-free), and so I don’t have to hike all the way out to Orly or CDG and deal with crowds and security and all the rest of that time-consuming airport hassle. AND it’s hugely pleasurable to sit there in comfort (you can stretch out, walk around, get a bite in the food car or work on a piece without the guy in front leaning his seat back into your 18 inches of personal space) and gaze at the beautiful French countryside whizzing by. AND the train drops me right into downtown Cannes, and I’m thus spared from having to disembark in Nice and then wait for the bus and the congested 40-minute freeway trip to Cannes.