Posted eight hours ago by Robert Reich on his Facebook page: “At the start they labeled you a ‘fringe’ candidate — a 74-year-old, politically independent, Jewish, self-described democratic socialist who stood zero chance against the Democratic political establishment, the mainstream media, and the moneyed interests.

“Then you won 22 states. And in almost every state — even in those you lost — you won vast majorities of voters under 30, including a majority of young women and Latinos. And most voters under 45. You have helped shape the next generation.

“You’ve done it without SuperPACs or big money from corporations, Wall Street, and billionaires. You did it with small contributions from millions of us. You’ve shown it can be done without selling your soul or compromising your conviction.

“You’ve also inspired millions to get involved in politics — and to fight the most important and basic of all fights on which all else depends: to reclaim our economy and democracy from the moneyed interests.

“Your message — about the necessity of single-payer healthcare, free tuition at public universities, a $15 minimum wage, busting up the biggest Wall Street banks, taxing the financial speculation, expanding Social Security, imposing a tax on carbon, and getting big money out of politics — will shape the progressive agenda from here on.

The Shallows (Columbia, 6.29) still doesn’t look all that great. Sharks don’t have personal agendas, and they aren’t persistent — they’re merely instinctual and occasionally hungry. The undercurrent, of course, has little to do with nature or survival but the fact that a fair share of the ticket buyers would probably like to eat Blake Lively themselves. Sidenote: I noted the following as I sat close to Lively during a Cafe Society schmoozer on day #2 of last month’s Cannes Film Festival: (a) her face is quite beautiful — every feature was perfectly sized and proportioned to a fare-thee-well; (b) she’s alert, observant and fairly sharp; (c) She really glowed, which was partly due to the fact that she’d hired a first-rate hair and makeup person; (d) I asked myself “when was the last time I sat this close to someone this pretty?” and the answer was “I dunno but it’s been a while”; and (e) she’s not small or petite — she’s around 5’10” and big-boned, and I don’t mean to suggest she’s in any way heavy-ish — I’m merely saying she’s not wirey or bird-like.

As promised, I saw Noah Baumbach and Jake Paltrow‘s De Palma (A24, 6.10) for the second time at the Aero on Sunday night. It’s easily the most enjoyable portrait of a director doc I’ve seen in years, and of course your average T-shirted, backwards-baseball-cap-wearing megaplex stooge will avoid it like the plague. As clever as DePalma often was and as memorable as many of his careful choreography sequences are/were, I don’t think he ever topped this death-of-Frank-Lopez scene. One of the reasons it’s my all-time favorite is because it’s not show-offy. It’s plain but with a strong “uh-oh” undertow. You can really feel the hot breath of death on the back of your neck. And the “what about Ernie?” thing is a perfect mood-lightener.

15 Comments
Almost But Not Quite

Somebody (possibly Sasha Stone) posted this on Facebook a little while ago. I got a good chuckle before I became irritated by the fact that Sasha or whomever forgot to put quotes around President Obama‘s greeting. You have to get these things exactly right or they don’t work. I can’t fix this, of course. Just saying. 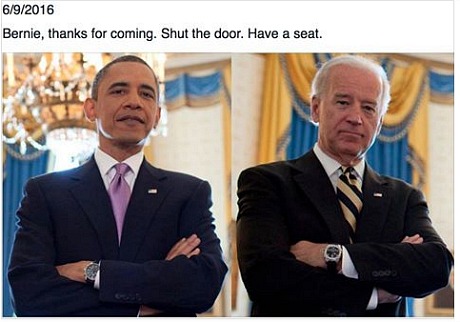 Why preview the death of a major Bourne character in a trailer? Don’t blame me. I didn’t do it. Ask Universal marketing.

You have no idea who you're dealing with. This July, Matt Damon is #JasonBourne.https://t.co/49DkZZdaBZ

Either you understand and appreciate the difference between (a) low-rent horror films aimed at the sandal-wearing slovenlies and mall meanderers and (b) classy, refined upscale scaries like Personal Shopper, The Babadook, The Witch, It Follows and Roman Polanski‘s Repulsion. If so you would also appreciate the difference between Personal Shopper director Olivier Assayas and a talented but opportunistic genre whore like director James Wan, whose latest film is The Conjuring 2 (Warner Bros., 6.10). Wan directed the original The Conjuring, which I thought was fairly decent but not all that great at the end of the day. (It tried too hard, and all but destroyed itself with a happy ending.) In any event I’m down for tonight’s all-media showing of The Conjuring 2. I know what it’s going to be.

The new poster for Southside With You (Miramax/Roadside, 8.26) doesn’t do it for me. It substitutes the green-summer-grass backgrounds in the early posters for a golden-hued washover effect, and for me that does very little to enhance or upgrade. The straw-colored amber in the poster is right next to sepia, which is a commonly-used metaphor for the romantic past (early 20th Century, late 19th Century, Somewhere in Time, etc.) It’s a mistake, I feel, to suggest that that 1989, the year that Barack Obama and Michelle Robinson went on their first date, exists in the realm of golden yesteryears. Please. Back to the green. 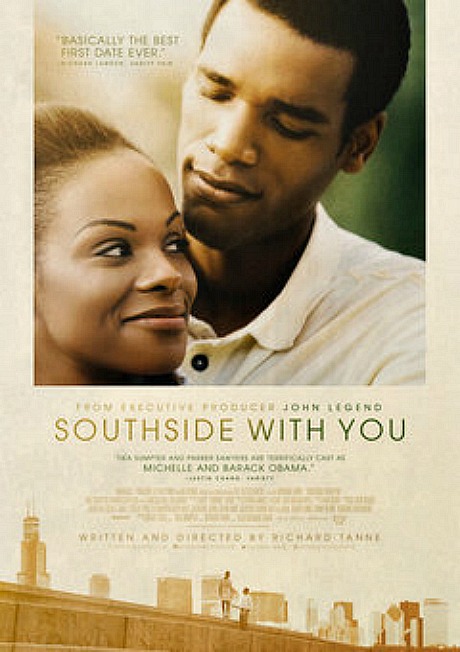 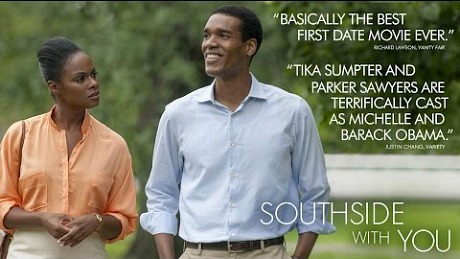 Bernie Sanders isn’t stupid. He’s not a fantasist. He knew all along that he probably couldn’t win. He just wants to go guns blazing into the Democratic Convention in Philadelphia so he can deliver his big Bernie revolution speech on a national stage. The Bernie movement is about “we, not he.” Hillary Clinton, who has, at best, a glancing interest in the goals of the Bernie movement, is about “she.” Which, for millions of women out there, is also about “we.” I get that. But when you boil the snow out of it, the Hillary “we” is not so much about policy or social priorities as a glass-ceiling shattering and a major triumph in the gender wars. Which is no small thing. Last night I felt that current along with everyone else. But the Bernie “we” is about much, much more.

The Bernie movement is not about gender, dynasty or “my turn!” — it’s about a fundamental change in direction that will…okay, which might start to prevent the shark of corporate capitalism, as Bill Maher said last week, from eating everything — democracy, the middle class, health care, the news media, our prison system. We all know Hillary Clinton isn’t out to change a damn fundamental thing. I agree with much of what she stands for, I’ll be voting for her next November and I’ll eventually find a way to get past that cackle laugh. But the Bernie thing has to keep going, and I don’t see what’s so bad, given the inevitability of Hillary’s nomination in July, in Bernie’s refusal to quench the torch. In fact I see something glorious in that.