I’m sorry but endings were on my mind today, and they really don’t get much better than this here one. Tommy Lee Jones and Tess Harper, of course. The Cormac McCarthy dialogue, pretty much straight from the book. Roger Deakins‘ cinematography and especially the razor-perfect cutting by Roderick Jaynes. Sinks right in and makes me a little bit sad every time. Joel and Ethan Coen‘s classic is almost a decade old, believe it or not.

All the posters for Richard Lester‘s Juggernaut (’74) showed a large explosive gash in the hull of SS Britannic, a trans-Atlantic cruise ship. Which was accurate as far as the story went even if the film never showed any exterior shots of a damaged hull, much less any footage of the two hull explosions that happen during the film. The question is what other films have promised this or that element in ad materials (one-sheets, trailers, TV spots) without delivering de facto? There must be dozens of examples. 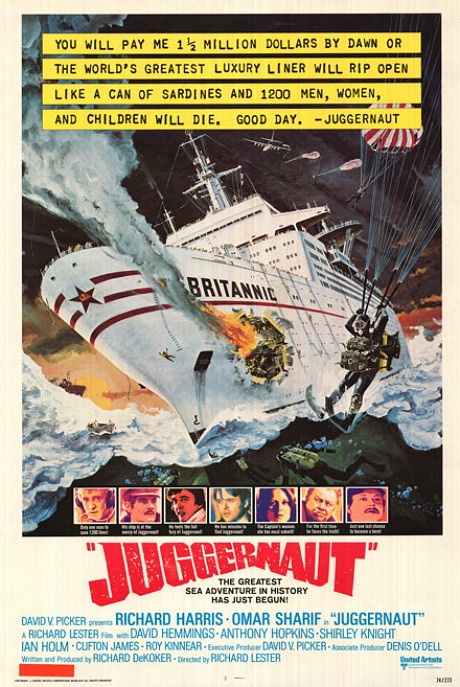 Bob Niland, Widescreen Review, Laserdisc Magic, 1998: “Laser rot is the appearance of video and audio artifacts during the playback of Laserdiscs, and their progressive worsening over time. It is most commonly attributed to oxidation in the aluminum layers by poor quality adhesives used to bond the disc halves together. Laser rot was indicated by the appearance of multi-colored speckles appearing in the video output of a laserdisc during playback. The speckles increased in volume and frequency as the disc continued to degrade. Much of the early production run of MCA DiscoVision Discs had severe laser rot. Also, in the 1990s, LaserDiscs manufactured by Sony’s DADC plant in Terre Haute, Indiana were plagued by laser rot.”

20 Comments
What Actors Often Do, and What People Almost Never Do In Real Life

When a major piece of information has just been revealed in a film or a play, directors always tell their characters to give each other “looks.” You know what I mean — their eyes signalling that something heavy has just happened or an “uh-oh” moment has just occured, and their expressions saying “are you thinking what I’m thinking?” In my entire life on this planet a friend has given me a “look” exactly once. People might quickly glance at a friend or colleague when a shoe drops, but for the most part they don’t. Why? Because looks aren’t necessary and they’re too dramatic anyway. Only actors give each other “looks.” If I was directing a film I would outlaw fucking “looks” so fast your head would spin.

Example: In that 9/11 documentary by James Hanlon, Gedeon Naudet and Jules Naudet, there’s footage of firemen trying to direct the stairwell rescue effort from the main lobby of the South Tower. As things progress you can hear the terrible crash of bodies hitting a nearby roof. In a movie the firemen would give each other “looks” after they hear the first impact sound. Their expressions would say “is that what I think it is?” In the Hanlon-Naudet doc everyone knows and they kind of suppress the emotional current they’re all feeling. They sure as shit don’t stop what they’re doing to share their forebodings.

I spent an hour this morning writing the beginnings of a review of James Schamus‘s Indignation (Summit/Roadside. 7.29), which I saw last night. Many critics reviewed it during last January’s Sundance Film Festival, but I’ve been asked to hold until mid or late July. I don’t mind doing that, but I’d like to say something about those Sundance reactions.

If you scan the Rotten Tomatoes and Metacritic links, you’ll notice that most of the Sundance critics dropped to their knees. A smartly written adaptation of a 2008 Philip Roth novel, they all said. Intelligent, well performed, a somber but engaging theme, highly believable period (i.e., 1951) detail and atmosphere, a riveting second-act argument scene between Logan Lerman and Tracy Letts, etc.

But there’s one thing they didn’t touch with a ten-foot pole, and that’s how the film feels at the very end. And the way a film feels at the finale is, of course, always a measure of whether or not the ultimate fate of the characters seems fair or reasonable.

Did a character fuck up badly and maybe hurt someone as a result? Then he or she deserves to feel some degree of pain at the finale. Has a character been falsely accused of something he/she didn’t do? Then his/her lack of guilt should be revealed at the end. He/she doesn’t have to end up rich or married to a movie star or elected President of the United States, but the record needs to be set straight to some extent.

If a more or less decent, fair-minded character is hit by lightning or a falling tree limb at the very end of a film and dies, that’s a completely shitty ending. “What did that happen for?”, the audience will say. No good reason, says the director or screenwriter. We just felt like killing him/her off because, you know, life can be cruel at times. Audience: “Well, fuck you then!”

A film doesn’t have to end happily or sadly or humorously or tragically, but you have to feel on some level that the characters have met with a fair and even-handed fate — that what happened or didn’t happen to them seems justified.

When George Kennedy‘s psychopathic asshole character was killed and eaten by guard dogs at the end of Michael Cimino‘s Thunderbolt and Lightfoot, there was no disputing that he’d gotten what he deserved. Ditto when Elliot Gould‘s Phillip Marlowe shot Jim Bouton‘s Terry Lennox at the end of The Long Goodbye. I’ve noted a couple of times that the ending of The Godfather, Part II wan’t an upper but it felt justified. Michael Corleone has grown into a monster, and at the end he’s left all alone with his recollections of the idealistic youth he used to be and a realization that this younger version of himself has more or less died. Not a happy ending but a fair one. Corleone has accrued all the power but lost his soul.

20 Comments
Speaks For Itself

I like President Obama‘s shrug at around the 45-second mark. That’s my whole reaction. The shrug is cool.

I’m obviously not alone on De Palma. At all. Almost everyone agrees with me. (97% Rotten Tomatoes, 81% Metacritic.) It’s a bowl of pure movie-geek pleasure. Now go spend your money on The Conjuring 2, Now You See Me 2 and Warcraft, o ye wise men and fucking assholes. 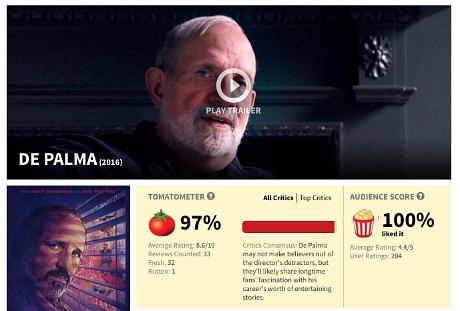 June 10, 2016 10:30 amby Jeffrey Wells
75 Comments
Bold Leadership Isn’t In Hillary Clinton — She’s An Incrementalist — Guarded, Cautious. Which Is Why, I Fear, She Won’t Ask Elizabeth Warren To Partner Up.

In a two-day-old interview with ABC’s David Muir, I sensed a whiff of Hillary Clinton’s aversion to asking Elizabeth Warren to be her vp. A “granny ticket” with Warren would melt away a lot of the resentment that the Berniebots feel toward Hillary, and it would really raise the gender flag. It would constitute a huge “fuck you” to the establishment patriarchy and all those smarmy news guys asking “is the country ready for a two-woman presidential ticket?” (Read: We aren’t!)

The chickenshit Clinton approach would be to pick a nice, safe, dull older male to be her vice-president so the bubbas can say to themselves “well, if she dies in office we’ll at least have a dude taking over and not, good God, another woman.” The bold approach would be to say “I’m in no way a revolutionary and I never will be, not with my Goldman Sachs payoffs and my secretive nature and allegiance to the corporate Democratic establishment attitudes personified by Debbie Wasserman Schultz, but this has been a year of revolutionary outcry and Elizabeth Warren, besides being a tough pol and an organized advocate, addresses that outcry…hell, she is that outcry…and I would be honored to have her join me.”