Criterion’s Dr. Strangelove Bluray arrived this afternoon. Panting, pulse-quickening excitement…right? How does this 4K-scanned version compare to the 2009 Sony Home Entertainment Bluray? Well, it looks great as far as it goes. The blacks are wonderful. The grainy portions seems a bit grainier, but Strangelove grainstorms has always been pretty thick. It seems to deliver just a wee bit more information on the tops, bottoms and sides than the ’09 disc. (Just a glancing impression.) Some portions seem a little dark for my tastes but only here and there. I’ve been told that the Criterion is sourced from the exact same Grover Crisp-supervised harvest used for the Sony Bluray. It’s a very nice-looking disc. The tiny threads in Merkin Muffley’s flannel suit have never looked so specific. I’ll check out the supplements tomorrow. It’s made my day.

I recognize there are millions who are behind Donald Trump precisely because of his use of racial slurs, not in spite of them. Because this brands him as one of them, and because they regard the 2016 election as an Alamo-like last stand of the Oxycontin-swallowing, working-class rural white man against the forces of politically correct deballing and aggressive multiculturalism (African Americans, gays, Hispanics, Muslims, transgenders-in-the-wrong-bathroom, etc.) that are transforming a once-great country into a place that rural dumbshits no longer recognize. But Sen. Mitch McConnell, whom I despise, was right when he said Trump has to stop improvising and start delivering carefully phrased speeches. If Trump continues with the rude-bad-boy act, he might not just lose but take a lot of Republicans over the side with him. Here’s hoping he ignores McConnell from now through 11.8.16.

Boiled down it said that Barber doesn’t do interviews but boy, has he turned things around at MGM! Good for MGM stockholders, but to me Barber, his executive accomplishments aside, is still the dick who refused to permit an independent restoration of the 70mm roadshow version of John Wayne‘s The Alamo, and in so doing oversaw its apparent destruction. 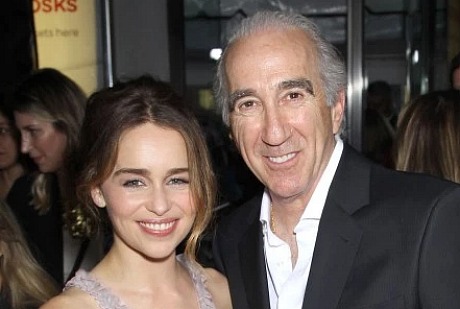 (l.) Me Before You star Emilia Clarke, (r.) MGM CEO Gary Barber at Me Before You premiere at AMC Loews Lincoln Square 13 theater on 5.23.16.

Bart quotes a distribution exec who describes Barber as “a movie fanatic.” No — Barber’s treatment of the 70mm Alamo elements absolutely disqualifies him from ever being so described. What he is, at least in this particular realm and certainly from the perspective of the hovering ghost of Alamo director-producer John Wayne, is a seemingly arrogant egoist, or at the very least a smug one.

“In its own quiet way, MGM produces 5-7 movies a year, has 14 TV shows on the air, has earned a profit of $124 million in its first quarter, and is positioned to make some intriguing acquisitions in the coming year,” Bart wrote. “For a company that five years ago was mired in more than $5 billion in debt and that many in the industry had considered comatose, this is a formidable achievement.”

It seems evident, in short, that outside the Alamo situation Barber is a smart, aggressive, well-organized exec who knows how to get things done. Great. Then why has he shown such callous disregard for the condition of a not-great but generally respected film that could have been saved in its original 70mm form, but is now lost for the most part? What kind of South African buccaneer, unwilling or unable to spend money to restore the 70mm version of a 1960 John Wayne film, refuses to allow a restoration of said film to be independently funded?

It was nearly two years ago when Beverly Faucher, MGM’s VP of Asset Management and Delivery Services, said in an official statement that “the original 65mm theatrical elements of The Alamo are in fine condition and are not in need of restoration” — one of the most outrageously ignorant, bald-faced lies offered by a representative of a Hollywood entertainment company in the history of western civilization.