Support on Patreon Follow @wellshwood
98 Comments
“Foremost On Our Minds…”

Venal and appalling as he’s shown himself to be on so many occasions, Donald Trump is not 100% wrong when he says that some in the U.S.-based Muslim community have been reluctant to report alarming activity and/or intentions. This suspicion is obviously backed up by reports that Omar Mateen‘s widow, Noor Salman, knew of his intention to cause harm (one report says she accompanied him when he bought firearms used in last weekend’s massacre) and tried to talk him out of this.

Federal prosecutors have reportedly convened a grand jury to investigate her and possibly charge her as an accessory to 49 counts of murder and 53 counts of attempted murder as well as with failure to notify law enforcement about the pending terrorist attack and lying to federal agents.

Posted on 3.23.16: “Trump’s broad-brush thinking and sloppy sentence construction implies that many if not most Muslims may be guilty of looking the other way, which is an undoubtedly wrong and unwise conclusion, but there seems to be little doubt that a tiny sliver of persons within any average Muslim expat community support ISIS, and that these persons are almost certainly keeping quiet about what they may have seen or heard about the activities or whereabouts of the ‘wrong’ ones. It follows that friends and family of these persons would probably also keep mum.

Yesterday Indiewire‘s Anne Thompson posted a 2017 Best Picture projection piece. I’m here to straighten her out on a few things. I’ll post her list of preferred contenders with comments and corrections, and then post my own.

Thompson’s first wrongo is her statement that Nate Parker‘s The Birth of a Nation and Jeff Nichols‘ Loving have emerged as “the biggest Oscar contenders for Best Picture.” The wildly euphoric response to Parker’s film during last January’s Sundance Film Festival is still having its effect. I’m not saying Birth won’t be Best Picture nominated, but it won’t stand up to the second and third waves of scrutiny that will kick in after it screens at the fall festivals and especially after Joe and Jane Popcorn start paying to see it. Loving is a decent film but not a great one. The Oscar pony isn’t the film but Ruth Negga‘s lead performance.

Thompson undervalues Kenneth Lonergan’s “emotionally devastating” Manchester By the Sea (Roadside/Amazon) by ranking it third. As a portrait of human tragedy and vulnerability it is two or three times better than Loving and The Birth of a Nation combined. Lonergan’s writing alone makes it a huge stand-out. And there’s are no performances in Loving (including Negga’s) or The Birth of a Nation that can hold a candle to Casey Affleck‘s turn as a devastated lonely-guy divorcee.

7. Gary Ross‘s The Free State of Jones (STX). Wells comment: Not a chance. They’ve been hiding it. Ross clearly doesn’t “do” Oscar-level stuff.

8. Derek Cianfrance‘s The Light Between Oceans (DreamWorks/Disney). Wells comment: No way. It’s opening commercially on 9.2 — the day that Telluride kicks off. If it had the vaguest Oscar qualifying chops it would be playing at Telluride and opening later.

9. Morten Tyldum‘s Passengers (Sony). Wells comment: Strictly a big-budget commercial space drama. Not a prayer of Oscar contention except for production design, FX, etc. The plot has an ethical problem that will stir a fair amount of debate once it opens commercially.

10. Warren Beatty‘s Rules Don’t Apply (New Regency/Fox). Wells comment: No clue at all but Beatty having described it as a “lighthearted dramedy” doesn’t exactly suggest an awards contender to me. It might be a perfectly fine film. I know it has a good story.

11. Martin Scorsese‘s Silence (Paramount). Wells comment: I’ve been hearing for months it’s going to be a rough sit in terms of physical anguish and torture scenes. Are we talking about the new Revenant?

12. Clint Eastwood‘s Sully (Warner Bros.). Wells comment: Maybe but after Tom Hanks lands his jet on the Hudson where can the movie go?

Suicide Squad‘s put-on attitude is obvious to the dumbest ticket-buyers in Beijing, Shanghai or Bangkok, but I’m getting a demonic vibe from this trailer. Something feral and soul-less. Maybe it has something to do with the Orlando massacre vibe but I’m suddenly asking myself “are there any depths that corporate Hollywood won’t sink to to make a sick buck?” What will this movie bring to the table except a razzle-dazzle porno-violent milkshake with a wink-wink attitude? How will this film not inject corporate poison into the veins of the culture? How will it expand our movie vocabulary or give anyone a sense of elevation? It seems 110% aimed at the lowest common denominator. Is director-writer David Ayer a closet Satanist? I’m sensing nausea here.

Did you know that prior to being condemned by Messala (Toby Kebbell) to life as an oar slave on a Roman ship that Judah Ben-Hur (Jack Huston) travelled to Nazareth and had a philosophical conversation with a brawny, bearded carpenter of Brazilian ancestry (Rodrigo Santoro)? Carpenter: “Love your enemies. God is love. He has a path for you.” JBH: “If he’s already decided my path how am I better off [something or other]?” Carpenter: “Why don’t you ask God?”

Wiki tipoff: “Unlike in the original film, Jesus H. Christ will have a prominent role in this version. Paramount Pictures’ vice chairman Rob Moore [has] stated that Christ in this version “is going to be consistent with people’s expectations,” and that the “expectations of the faithful will be honored by this one.” This was because Paramount wants to avoid the sort of backlash received by Darren Aronofsky‘s Noah because some Christians were dismayed by the film’s inventive and inaccurate interpretation of the Bible.”

What is that Godawful song playing over portions of this?

The trailer obviously makes clear that Jack Hawkins‘ Quintus Arrius character has been eliminated from the upcoming version, which Paramount will release on 8.19.

Last night Jimmy Fallon said that “when we think of Orlando, we think of bliss-out vibes, frolic, people having fun” or words to that effect. Prior to last Saturday night if you had asked me for an instant “Orlando” reaction I would have said “Disneyworld, tourist schmucks, ugly, flat typography, over-developed, a must to avoid, I’ll never go there.” I once knew a married guy who said that he and his wife had vacationed twice in Disneyworld, and that they were planning to go again. It was their idea of a really nice time. You can’t order people to have a sense of taste about things. You can’t teach it. Taste is a result of a thousand distastes, and some people don’t clue #1 what the hell that even means.

Could there anything more “twee” than a gently emotional film about A.A. Milne, the creator of the “Winnie the Pooh” books? Especially with Milne being played by Domnhall Gleeson, one of the undisputed kings of Hollywood twee with his achingly sensitive manner, fucking carrot hair and watery blue eyes? When I read about Fox Searchlight’s Goodbye, Christopher Robin, which will costar Margot Robbie as Mrs. Milne, I went “aarggh!” Mrs. Tarzan and Jordan Belfort‘s insanely seductive gold-digging wife married to a dweeby English poet? In what universe will this film take place? 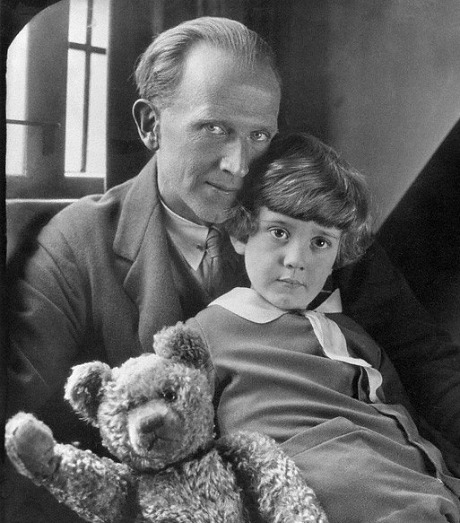 We’ll apparently be looking at another Finding Neverland (’04), in which Johnny Depp played another revered London-based author of a legendary children’s fable. Pic will be directed by Simon Curtis (Woman in Gold, My Week With Marilyn) with a script by Frank Cottrell Boyce and Simon Vaughn.

Is there any chance we’ll one day see a movie about Theodor Seuss Geisel, i.e, the creator of the Dr. Seuss books?

Will Curtis’s film acknowledge that Milne’s son, Christopher Robin Milne, who was the inspiration for the Christopher Robin character in the Pooh books, became more and more resentful of his father’s exploitation of his childhood and came to hate the books that had thrust him into the public eye?