Last night I posted what I called an “Open Letter to Personal Shopper Loyalists.” I asked the critics who had strongly or at least respectfully praised Olivier Assayas‘s film after its debut at last month’s Cannes Film Festival to explain the strange schism between admirers (of which they are many) and dissers (ditto). What’s going on here and why? I asked. Variety and Time Out critic Guy Lodge replied a little while ago. Here’s what he wrote: 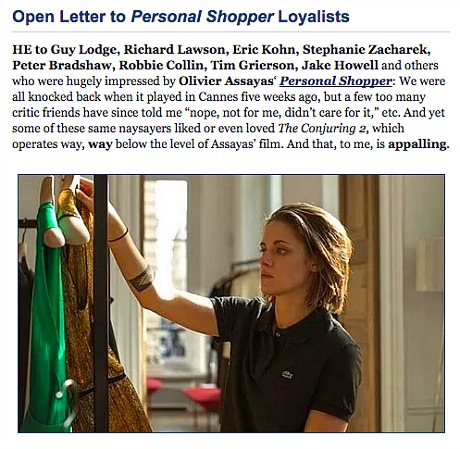 “Like you, I’m disappointed by the number of dismissive reviews out there for Personal Shopper, though pleased it has a distinguished core of champions — a group I’m sure is going to grow over time. Assayas’ Clouds of Sils Maria (of which I wasn’t actually a big fan) also played Cannes to mixed reviews, though by the time its U.S. release rolled around, there had definitely been an uptick in its reception.

“I’m not surprised, however, by the Cannes dissenters. Within the opening minutes of the film, I had a strong instinct that (a) I would really be into it, and (b) that it would receive boos.

“The ectoplasm in the possibly haunted house was the giveaway for me: many Cannes critics like genre when it’s postmodern or symbolically self-aware or otherwise above convention, but when Assayas starts engaging directly and sincerely with ghost-story tropes, those critics sneer.

“There are still critics who regard fantasy, however intelligently imagined, with a degree of snobbery, just as there are those who still see Kristen Stewart as the girl from Twilight. Most of the boos at Cannes came from critics who fall into either or both of those camps.

Andrea Arnold‘s American Honey is a kind of Millenial Oliver Twist road flick with Fagin played by both Shia Labeouf and Riley Keogh (Elvis’s granddaughter) and Oliver played by Sasha Lane…but with some good earthy sex thrown in. There’s no question that Honey stakes out its own turf and whips up a tribal lather that feels exuberant and feral and non-deodorized. It doesn’t have anything resembling a plot but it doesn’t let that deficiency get in the way. Honey throbs, sweats, shouts, jumps around and pushes the nervy. (Somebody wrote that it’s Arnold channelling Larry Clark.) It’s a wild-ass celebration of a gamey, hand-to-mouth mobile way of life. And every frame of Robbie Ryan‘s lensing (at 1.37:1, no less!) is urgent and vital.” — from my 5.14.16 mini-review. A24 will presumably open Honey sometime in the fall.

Once upon a time I was part of Team Independence Day. Back when it was shooting in ’95, I mean. I loved the concept, I knew producer Dean Devlin to some extent (he was good at talking up journalists), and at Dean’s invitation I once visited the Playa del Rey Independence Day set with Jett and Dylan when they were six and five, respectively. Then the big premiere happened in Westwood the following summer…thud. I mostly hated it. Nobody loved it. I remember walking through the UCLA campus on the way to the after-party and listening to a talent agent, walking nearby, tell a friend or colleague that it was “bad, bad, bad.”

I decided that night that I’d never again see Independence Day, and I never did. And that I’d never see a sequel. And so I’ve never had any intention of seeing Independence Day: Resurgence (20th Century Fox, 6.24) in any format — no all-media, no paid-ticket screening, no Bluray, no streaming…nothing. Shitty idea. Horrific prospect. Eraserhead.

From Peter Bradshaw‘s 6.21 Guardian review: “Joyless and tedious, a reboot quite without the first film’s audacity and fun. The plot’s potentially interesting dependence on the idea that there are aliens who are allies as well as enemies is lost in a tiresomely written muddle — an all-but-plotless melee of boring digital carnage. The first film was a creature of the pre-digital age when the spacecraft on screen were mostly physical models, but it can’t be entirely the fault of our digital age that this film has no real sense of excitement and awe. It’s a movie that is going through the intergalactic motions.”

12 Comments
He Stood Up

The official The Birth of a Nation trailer, posted today by Fox Searchlight. I’m told that some CG shots of smiling angels, which I didn’t care for at all when I saw Nate Parker‘s film last January, have been cut. That’s a good thing.

A new film by John Michael McDonagh (The Guard, Calvary) demands attention, and there’s no disputing the fact that War Against Everyone did well when it premiered last February in Berlin. “Imagine if Quentin Tarantino directed Starsky and Hutch and didn’t mess it up with his whole malignant misanthropic, misogynistic look-at-me thing. The result would be McDonagh’s snort-milk-out-your-nose-funny buddy cop comedy. Michael Peña and Alexander Skarsgard play Bob and Terry, co-dependent corrupt Albuquerque pigs snorting and shooting their way to tumble a supercilious English Lord (Divergent‘s Theo James) into horseracing, heists, and kiddy porn.” — from a non-bylined Vanity Fair review filed from Berlin.

The general beef seems to be that the film is mainly interested in (a) delivering a dry history lesson and (b) deifying Matthew McConaughey‘s real-life Southern rebel. A Civil War-era drama that only last week was being positioned by Indiewire‘s Anne Thompson as a possible Best Picture “contender” appears to be headed for the rocks. Gleiberman: “A misfire…shot with the boxed-in functionality of basic cable television.” Abele: “One of those historical dramas with a script that’s big on crowning lines of moral fervor and not so big on nuts-and-bolts detail.” If you count Interstellar as a problem movie (and I do, hugely), this is the third stinker in a row for McConaughey. Perhaps Stephen Gaghan‘s Gold, in which he stars with Edgar Ramirez, will turn things around. 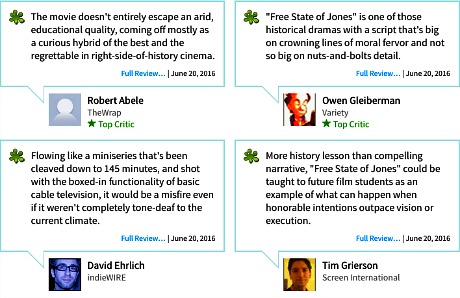 The white hinterlanders supporting Donald Trump have never had significant problems with his racist attitudes, blustery braggadocio or lack of interest in coherent, fact-supported viewpoints. But they respect the fact that he’s rich, and I suspect their support would diminish if it were shown that he’s not quite the financial titan and skillful wheeler-dealer that he’s portrayed himself as all along.

Well, that possibility is suddenly being kicked around and explored. Last night’s N.Y. Times story about his lean campaign finances and “crippling money deficit“, based on Monday’s campaign finance report, along with the newly trending hashtag #TrumpSoPoor, punches a hole in the notion that he’s a crafty, bucks-up insider who knows all the angles.

Who is Trump if not Daddy Warbucks, Auric Goldfinger with a coif, Mr. Swagger with the “don’t worry, I know how to negotiate great deals” attitude? Indications are that he’s something of a miser, an Uncle Scrooge, a guy who squeezes the nickle until the buffalo shits.

The Times story states that Trump currently has the “worst financial and organizational disadvantage of any major party nominee in recent history.” His campaign raised only $3.1 million in May, he had to lend himself more than $2 million, and his campaign had only $1.3 million as June began while Hillary Clinton had around $42 million at the same juncture. The campaign report coupled with campaign manager Corey Lewandowski getting sacked yesterday are obvious indications of damage in the hull.