5.18.16 HE review of Xavier Dolan‘s It’s Only The End of the World: “The words that best describe It’s Only The End of The World are ‘infuriating’ and ‘arrogant.’ The 97-minute non-drama is about a successful 34 year-old writer named Louis (Gaspar Ulliel) who announces at the very beginning through voice-over narration that he’s dying and is on his way home to tell his family, whom he’s avoided seeing for 12 years.

“Except when he gets there he can’t bring himself to break the news, and in fact say much of anything. He can’t even throw out bon mots or witty conversation. Nothing. And it stays that way. Louis is either wimping out or so full of loathing for this suburban brood (played by Nathalie Baye, Marion Cotillard, Lea Seydoux and Vincent Cassel) that the words just won’t come.

“And so we, the audience, are trapped in hell as he stares at his mother (Baye), brother (Cassel), sister (Cotillard) and sister-in-law (Seydoux) and listens to them rant about their anger and frustrations and sense of entrapment. And then he stares a bit more and listens a bit more and sweats and continues to stare, his eyes all glistening from the feeling. And then he throws up out of sickness (or possibly from anxiety) when he’s alone in the bathroom.

“In short Louis seems to be trying to divulge his situation but lacks the courage or conviction. He’s so consumed by the enormity of what he needs to say that he can’t say it.

“I think it’s safe to call it the worst film of the 2016 Cannes Film Festival thus far.” 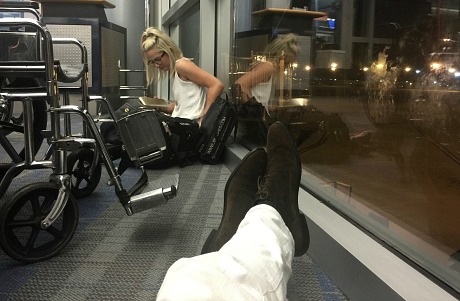 All white performers who’ve mimicked or sampled black music, performers or styles are dickish exploiters who need to be corrected and bitchslapped. Justin Timberlake, who has appropriated aspects of black culture in his musical performances (and who was apparently, in the view of some, the careless orchestrator of Janet Jackson‘s boob-flash during the 2004 Super Bowl halftime show), found this out yesterday. His crime was tweeting that he was “inspired” by remarks during Sunday’s BET Awards by Grey’s Anatomy actor and social justice activist Jesse Williams, and for subsequently tweeting to a black critic that “the more you realize that we are the same, the more we can have a conversation.”

Williams ranted about “this invention called whiteness” that has specialized in “ghettoizing and demeaning our creations then stealing them, gentrifying our genius and then trying us on like costumes before discarding our bodies like rinds of strange fruit”. Williams said in so many words that “we need to restructure whites’ function, and ours.”

In short, guys with attitudes like Timberlake’s need to be straightened out and probably diminished for the time being, and, by extension, the memory of infamous music-industry exploiters like Morris Levy needs to be retroactively re-addressed. I don’t think it’s pushing things too far to say if Elvis Presley and Sam Phillips had returned to earth to give their own BET speech, the audience probably would have thrown fruit and booed their asses…right?

Perhaps Presley and Phillips would have been pelted with tomatoes and with ample justification, obviously, but they were coming from a whole different era when they stole black music in order to sell it to ’50s whites. We all do what we can according to the rules and restrictions we encounter when we step up to the plate.

Consider this 6.27 Guardian piece by Rebecca Carroll, which riffs on what Williams was saying. It’s angry and dismissive and reiterates the basic p.c. chant of many progressive black artists, which is that (a) we ain’t “all one” and (b) it’s time for white-ass artists, music executives and TV/movie producers to shut up and chill at the back of bus while artists of color reap the cultural whirlwind, correct the imbalance and reshape things to come.

Dan Kwan and Daniel Scheinert‘s Swiss Army Man did $105K last weekend in three theatres, which is pretty good. It opens wide this coming Friday. The initial Sundance kerfuffle (i.e., the film being nearly killed by Jeff Sneider and Ramin Setoodeh) seems to have subsided in favor of this A24 release becoming a “thing.” The 62% Rotten Tomatoes rating obviously means it has a fair amount of fans — that figure could just as easily be 72% or 52%. There seem to be more people agreeing with than disputing this Amy Nicholson remark: “When I first saw it at Sundance, I wrote it off as sublimely stupid. The second time, I realized it was stupidly sublime.” What do I think? After the Sundance rumble I was ready to blow it off because of the farts alone (any movie that makes liberal use of peeing, farting, shitting and belching usually encounters some form of HE resistance), but I guess I’ll be seeing it….uhm, by Wednesday?

I was watching portions of this yesterday between flights. There’s acting here, obviously, but I felt it anyway. Every successful campaign needs a certain lift-all-boats factor, and I can sense a certain musical convergence here. Agreed, it’s mainly the Warren music but she does have a way of making the hold-your-nose-and-vote-for-Hillary idea seem…well, something I can let go of. There’s a current here. Yesterday’s Ohio rally was obviously a tryout. Hillary wanted to see how it would go, how it might feel. Now she knows.

A 6.28 NBC News story reports that Hiddleswift fans (i.e., Taylor Swift fans who have a passing interest in her recently revealed relationship with Tom Hiddleston) can buy break-up insurance from Taobao, China’s biggest online marketplace. Which is a thing, of course, because everyone has decided that Hiddleswift isn’t long for this world. Mainly because Swift goes through guys like potato chips so it’s basically a matter of when her next mood swing will kick in. Or Hiddleston’s. Whatever.

It’s obviously a dance of the indulged. They’re spinning around Roseland, and when the music stops that’s it. There are many ways by which the “music” in a relationship can stop playing or more precisely can stop being heard. I had a symphonic run with a beautiful blonde from the late spring to mid fall of 2013 so don’t tell me. (The dream wore off, life issues accumulated, her mood changed and I got dumped…that’s life. And yet God still sheds His grace on occasion.)

I’m giving Hiddleswift another three to four months. Two? If either of them encounters the slightest career pothole or slowdown of any kind, it’s over. On top of which Hiddleston is believed to be a bit of a carouser. Clint Eastwood said it decades ago: “No matter how beautiful or desirable a woman may seem, there’s always some guy in her life who’s tired of fucking her.”