Daniel Ragussis‘s Imperium (Lionsgate Premiere, 8.19) is about a short guy (Daniel Radcliffe) infiltrating a group of radical right-wing racist nutters. Written and directed by Ragussis from a story by Michael German, and almost certainly influenced on some level by Costa-Gavras‘s Betrayed (’88), in which FBI agent Debra Winger not only infiltrates a secret white racist organization but has an affair with the leader, played by Tom Berenger. Betrayed wasn’t very good, in part because Joe Eszterhas felt obliged to insert the fucking element. Imperium, which costars Toni Collette, Tracy Letts and Sam Trammell, will have a limited theatrical opening concurrent with VOD.

I’ve long believed that Albert Brooks‘ two finest films are Lost in America and Defending Your Life, but I happened to watch Modern Romance the other night on Netflix (where all the Brooks films are playing for the time being). It was almost a revelation. I’d forgotten how subversively (i.e., sometimes uncomfortably) funny it is. It brought me back to those emotional moments in my own life when “the ‘ludes kicked in.” (Oh, for the days when I used to score at the old Edlich Pharmacy on Manhattan’s Upper East Side.) Kathryn Harrold married The Last Word‘s Lawrence O’Donnell in ’94; they divorced in ’13 or thereabouts. Harrold runs an L.A.-based counselling service.

I had intended to catch a screening last week of Mike and Dave Need Wedding Dates (20th Century Fox, 7.8), but something interfered. What was that thing? What kept me from going? It may have had something to do with my wanting to avoid this film like the plague. That aversion was always there but I had told myself to ignore it. “Man up and watch the film,” I told myself. “Face the music, do the job, grapple with the zeitgeist.” But I ducked it anyway, and I’m not sorry in the least. And I’d as soon go to Dublin as to hell.

I’d have a different attitude if the movie was called Mike and Dave Get Captured By ISIS. I would’ve attended that film with bells on. But of course that was never in the cards.

“Yes, it’s a piece of product shaped by four decades’ worth of arrested-adolescent farce, going back to the granddaddy of bad-behavior comedy, National Lampoon’s Animal House,” writes Variety‘s Owen Gleiberman. “[And] the women, who used to be victims of this stuff (or on the sidelines), are now at the rowdy, disheveled, foul-mouthed center of it all, and that just multiplies the highly agreeable possibilities for naughty nasty lunacy.

I was reading Wesley Morris‘s 7.1 N.Y. Times piece about the overlapping realms of Blake Lively and Kate Hudson and how this affected his response to The Shallows. About halfway through it hit me that even though The Shallows has only taken in $36.7 million after 11 days in release, Lively has come up in the world since it opened. She’s become a kind of juggernaut, a major blonde, someone you talk about, a thing. This dumb-ass shark flick is the best thing that’s ever happened to her career. So I thought about this, and re-read my Shallows review and then stumbled upon something that Ben Affleck said about her in 2012. Just to keep things in perspective. 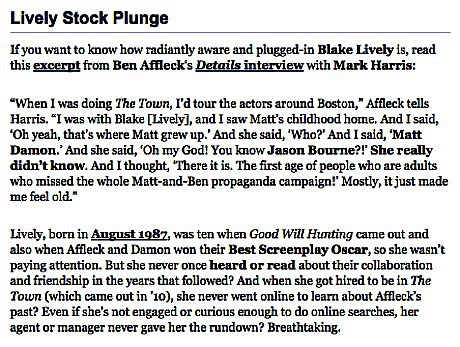 All my life I’ve been vaguely bothered by the gaseous nature of Jupiter, and the distinct possibility that it has no terra firma core of any kind — that it’s just a big ball of fucking gas. What’s the point of being a planet if a spaceship can’t land on it? Or if a Death Star can’t blow it up? Jupiter has what…eight orbiting spherical moons out of a total of 67, and you’re telling me they’re orbiting around a mere ball of gas? 2001‘s black monolith beamed radio signals at Jupiter for a reason, right? 48 years ago Dave Bowman soared in his little spacecraft over Jupiter’s purple and green seas and orange and crimson mountain ranges, only to end up inside an 18th Century chateau residence. Even if the Jupiter chateau was all in Bowman’s head, at least it felt like something. Gas is nothing. I just find it bothersome. Juno (which incidentally weighs nearly four tons) needs to settle this matter once and for all.

It’s natural to go a little dippy in the early stages of a love affair. You might occasionally say and do things that will seem a bit silly or ill-considered later on. But you still have to draw a line. Especially if you’re looking to play a famous secret agent superstud. Somehow the name “James Bond” and a #famewhore hash tag don’t jibe. Call me old-fashioned but when 007 falls in love, he shows restraint. He might have been crazy over Honor Blackman‘s lesbian pilot in Goldfinger (i.e., the hottie who decided to become hetero or at least bi after fucking him), but he would’ve never, ever worn a T-shirt that says “I Heart Pussy Galore.” And in 1962 Sean Connery, trust me, would have never worn a T-shirt on a beach that said “I Heart Diane Cilento.” I’m sorry but this kills it for Tom Hiddleston — no 007 role for him, not after this. 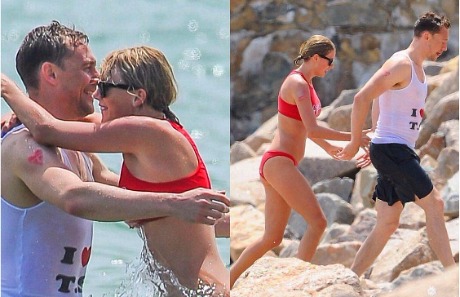 If I was at the beach with a new girlfriend and she put on a T-shirt that said “I Love JW,” I would smile and say “wow, so cool…I love you too” but inwardly I would be asking myself “what the fuck?”
July 5, 2016 10:07 amby Jeffrey Wells

Let’s take Trump at his bullshit word and accept that the campaign guy who assembled the anti-Hillary ad with the six-pointed star really was thinking of the lawman star worn by High Noon‘s Will Kane or Sheriff Gene Wilder in Blazing Saddles. Even if you give him that, how dumb did his staff have to be to not realize that the Star of David is also six-pointed, and that using this image would result in accusations of anti-Semitism? Three answers: (a) the staffer[s] behind the tweet didn’t consider this, which is breathtaking, (b) they didn’t care about the anti-Semitic shade they were throwing upon themselves or (c) they definitely knew what they were putting out and presumed that Trump supporters would understand what they were saying, which is that big-city Jews are corrupt and out for themselves and not on the side of real Americans. Any way you slice it the Trumpsters handled this like idiots.

F.B.I. director James Comey put the Hillary Clinton email thing to bed this morning by stating the bureau is not recommending charges against the presumptive Democratic presidential nominee for her handling of classified information as Secretary of State, and that “no reasonable prosecutor” would bring a case against her.

And yet — here comes the wrist slap I spoke of a few days ago — Comey said that Hillary and her staff were “extremely careless” in using a private server, etc. Read: blase, cavalier, indifferent, a tad clueless, a touch arrogant. Read: “The rules don’t apply to me as much as they do with others because I’m Secretary of State….I can skirt this. We can, I mean…right, Huma?”

So that’s it — “extremely careless” but no indictment. Trump will try to make something of this but what can he say? It’s just a verbal admonishment. Hillary has slinked out of a potentially damaging episode that was caused by her obsessive guardedness and aversion to transparency. Sooner or later she or Bill or someone close will once again step into the cowpie. The Clintons are always up to something.

I’m feeling so much nostalgia for Obama now — dry, careful, concise, drama-less. The Clinton years are going to be such a mess, such a headache.