This morning I was typing out my Ghostbusters review on the outside front porch at WeHo’s Le Pain Quotidien, and I couldn’t ignore the fact that several heavy-footed people were walking to and fro. I’m talking about fairly heavy impact sounds (“thump! boom! thump! boom!”) and especially the vibrations — those poor wooden beams shuddering from all that heavy-heel action.

I noticed this morning even 95-pound pixie women were walking this way….boom! boom! Like little grenades going off. The fact is that relatively few people walk in a light-footed way, as I try to do. I at least try to not pound my heels into the floor. I try to walk like Vaslav Nijinsky or Rudolf Nureyev.

I remember pointing this out to my younger sister when I was 11 or 12. I told her she sounded like a sumo wrestler coming down the stairs, and I demonstrated how you can glide down the stairs like Jimmy Cagney or Fred Astaire.

I realize, of course, that over half of those reading this don’t have clue #1 who Nurevev, Nijinksy, Cagney or Astaire were.

Anomalisa director-writer Charlie Kaufman to The Hollywood Reporter‘s Nick Holdsworth: ““It has gotten considerably harder for me to get things made. The early movies I made in collaboration with established directors, but since 2008 [i.e., Synecdoche, New York] I have been working to direct my own movies. At this point in the film business I am taking assignments when I get them. I need to earn a salary. I am doing what I can to make a living, but hoping to do what I would like to do.”

Kaufman to Variety‘s Will Tizard: “I think I have to have one commercial success in the indie world and I’m off. Anything that I do in this form that makes its money back or a little bit more than break even. That’s all it is. I don’t think anybody cares about anything else when they’re financing movies.”

HE to Kaufman: The titles, dude. You’ll lose 90% of your potential audience if the titles of your films seem overly referenced or smarty-pants. You don’t have to “dumb” your titles down, but they shouldn’t be aimed over the heads of people who graduated high school but skipped college.

The new Kino Bluray of William Wellman‘s The Ox-Bow Incident (’43) pops on Tuesday, 7.12. DVD Beaver’s Gary Tooze is saying it’s superior to the German (i.e., Koch Media) Bluray that I bought two or three years ago. I’ve never liked the German Bluray — too light, too speckly, too grainy. Do I trade it in for Amoeba store credit and buy the Kino version? Of course I do. 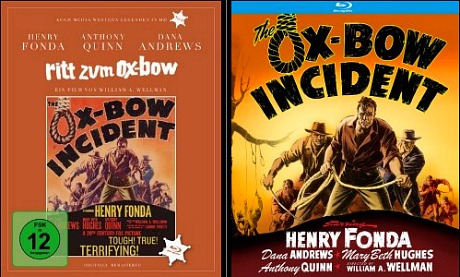 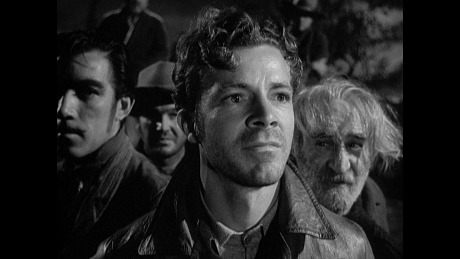 From “Another Hurtin’ Sundance Cancer Drama,” filed on 1.22.16: “Chris Kelly‘s Other People (Vertical, 9.9.16) struck me as deftly written and persuasively well-acted but fraught with self-pity and a little too glum. Wading through and meditating upon cancer death will have that affect. But it’s delicate and restrained and absorbing as far as it goes. And occasionally amusing. But…I don’t know what else to say. I felt respect more than affection.

“Some in the Eccles audience were reportedly choking up; not this horse. After the show I spoke to two or three guys (i.e., writers) who were partly critical; one was outright dismissive. I later saw on Twitter that others (but not all) were putting it down.

“Relatively few will pay to see this in theatres but it’s really not half bad, especially in terms of the acting. I never pulled back or disconnected; I always felt engaged. There’s already a consensus that Molly Shannon, who plays a spirited suburban mom dying of leiomyosarcoma, will be Best Actress-nominated for a Spirit or a Gotham Award. And that the low-key, somewhat pudgy, ginger-haired Jesse Plemons scores also as her son, a gay showbiz writer grappling with more than just the immediate tragedy at hand.

I didn’t mind Paul Feig‘s Ghostbusters at first. I actually didn’t mind it for the first 80 of its 116 minutes. Then Feig throws the corporate formula switch and Ghostbusters eats itself for the last 35. It does a major swan dive into the swamp of CG overkill, and the experience numbs your soul. 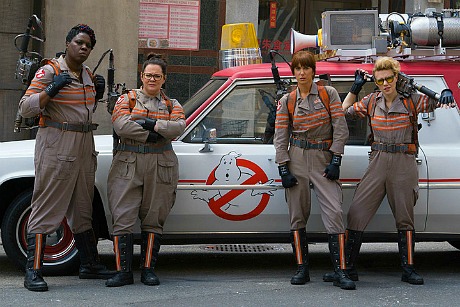 Going in I knew Ghostbusters would be a spirited, corporatized, digitally upgraded rehash of the ’84 original. Melissa McCarthy as Dan Aykroyd, Kristen Wiig as Bill Murray, Kate McKinnon as Harold Ramis, Leslie Jones as Ernie Hudson. And it is that. A “same but newer and splashier” approach — similar set-up, similar absurd story, same determination to de-fang and de-mystify the notion of actual ghosts by turning them into Disneyworld creations.

For what it’s worth, McCarthy, Wiig, McKinnon and Jones hold their own and keep the ball in the air. I liked their company. McKinnon is the most internalized of the four, but I’d love to see her as a lead in something. (A smart lesbo or hetero romcom? I’m good either way.) Jones is a lot of fun. McCarthy and Wiig deliver their usual usual. And hunky Chris Hemsworth, as their mentally-challenged assistant, is inoffensively okay.

Variety‘s Peter Debruge has complained that Feig is too averse to potential new realms, saying that “the fault lies in the fact that this new Ghostbusters doesn’t want us to forget them, crafting its new team in the earlier team’s shadow.”

Well…of course! Movies like this are never about throwing away the roadmap and revelling in creative invention — they’re about cashing in by delivering mostly the same thing only re-stirred and re-fried with some fresh cream on top.