Earlier today I listened to some piquant buzz from a “vested party” about Barry Jenkins‘ Moonlight (A24, 10.21), which will play at the Toronto Film Festival and perhaps another gathering I can’t speak of. We all know the drill — produced by A24, Plan B and Upload for under $5 million, based on Tarell McCraney‘s play “In Moonlight Black Boys Look Blue,” a coming-of-age film set in ’80s Miami, about a black dude named Chiron (played by Alex Hibbert, Ashton Sanders and Trevante Rhodes) amid the temptations of the drug trade. “I’ve seen it and it’s spectacular,” the v.p. says. “It’s Boyz in the Hood meets Boyhood meets Brokeback Mountain. Or…you know, it’s Boyz in the Hood but nobody gets shot.”  It’s all supporting parts but a major stand-out performance is from Mahershala Ali, the good-looking bald dude in House of Cards who had the hot affair with whatsername. Why can’t I find one decent Moonlight still featuring Rhodes and Ali?

Three Criterion Blurays arrived today — a remastered, 4K-harvesting of Tony Richardson‘s A Taste of Honey (’61) rendered at 1.66:1, a 1.33:1, high-def recapturing of Hiroshi Teshigahara‘s Woman in the Dunes (’64) and Stig Borkman‘s Ingrid Bergman: In Her Own Words, rendered within a 1.78:1 a.r. The Bergman doc pops on 8.16; the other two on 8.23. I still don’t understand why some boxy films are rendered at 1.33 and others at 1.37. I’ve been told for years that in the boxy realm 1.37:1 is the a.r. preferred by cinematographers. I don’t understand why they’re given equal weight. 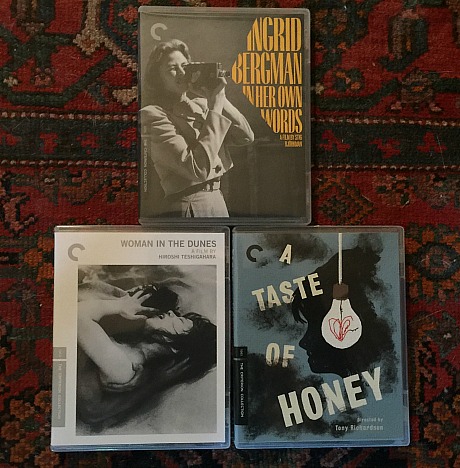 This political cartoon, drawn for Newsweek by Pulitzer Prize-winner Jack Ohman, has been pasted to the inside of a office-supplies closet door for the last…oh, close to 24 years. From a Dan Quayle biographical profile: “He seemed tongue-tied and flustered, wearing a stunned expression that Bush’s media adviser Roger Ailes described as ‘that deer-in-the-headlights look.'” 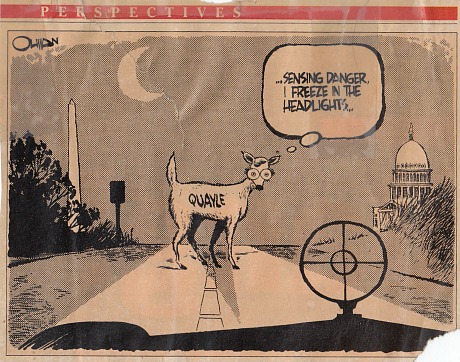 4 Comments
I Gave It A Shot, Okay?

Halfway through last January’s Sundance Film Festival (i.e., seven and a half months ago) I was talking to Guardian critic Jordan Hoffman about Jim Hosking‘s The Greasy Strangler (FilmRise, 10.7). Hoffman and his Sundance “boner buddies” (i.e., nerdy film festival elites who get off championing icky cult films that will probably have trouble attracting Average Joes in the commercial arena) were giggling about it, and although I was sensing difficult if not grotesque subject matter I was nonetheless wondering if I should see it. “Don’t,” said Hoffman, shaking his head and suppressing a grin. “You’ll hate it.” So I ducked it at Sundance, but Hoffman’s words would’t leave me alone. Last week I watched it on my computer. Started to watch it, I mean. AarrghhHH! Long-haired, saggy-bod fat guys in their underwear. Not to mention a fat girlfriend. Either you embrace this kind of thing or you don’t. Or can’t. I lasted about 25 minutes. Hoffman’s review called it “a welcome oasis of filth, depravity and shock in a culture that too often thinks merely being a little weird passes muster.” 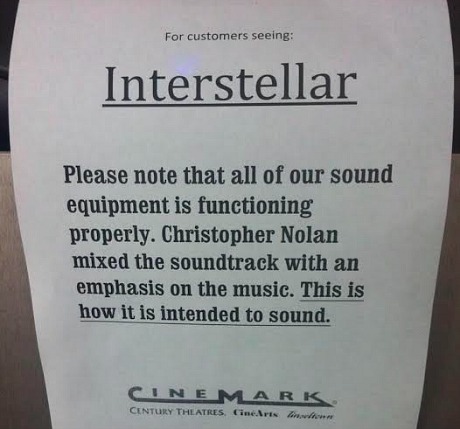 So Variety‘s Kris Tapley recently told Meryl Streep that her Bridges of Madison County costar Clint Eastwood said he’d vote for Donald Trump. “I didn’t know that,” a “visibly surprised” Streep said. “I’ll have to speak to him. I’ll have to correct that! I’m shocked. I really am. Because he’s more…I would have thought he would be more sensitive than that.” 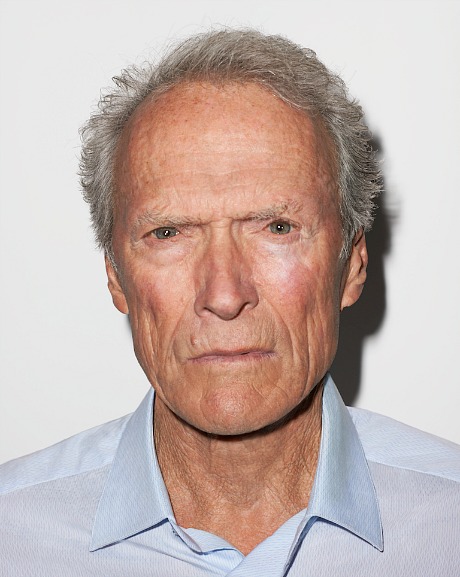 Clint “down with the pussy generation” Eastwood, director of Sully (Warner Bros., 9.9).

6:02 pm update: When Hainey pushed Eastwood later in the chat to choose between Trump and Hillary Clinton, Eastwood said he’d have to “go for” Trump. But he was being goaded. Hainey was testing Eastwood’s mettle. He was saying to him, “Are you a man or a mouse? Are you going to stand by your crusty, old-guy, Walt Kowalski-ish conservative principles or fold like a wuss and vote for Clinton?” Eastwood had to man up and say “Trump” but he didn’t mean it. And I didn’t really believe it.

Back to original piece: If Clint endorsed anyone he endorsed Sully, the real-life airline pilot played by Tom Hanks in Clint’s forthcoming film (Warner Bros., 9.9). Esquire quote: “It’s a madhouse out there. You wonder, what the hell? I mean, Sully should be running for president, not these people.”