Support on Patreon Follow @wellshwood
29 Comments
“What Do They Want? Where Are They From? What Do They Look Like?”

I’m sure Donald Trump will claim later today or tomorrow that he was joshing around when he suggested that some gun nut could put a bullet into Hillary Clinton if and when she becomes President, but he did say that. He was speaking in that free-associative swaggering style of his, but come on. The man is venal. A N.Y. Times commenter named Dennis posted the following around 2:15 pm Pacific: “I’ve noticed that this is a recurring rhetorical technique employed by Trump: say something that at first blush seems incendiary on its face, followed immediately by pulling his punch with a disingenuous ‘I don’t know’ — upon which the dog-whistle crowd goes nuts. Then, after the media picks it up, the campaign offers up an ‘alternative’ explanation for the remarks that is the picture of innocence, but has little to nothing to do with what he implied or his audience actually heard.”

(More…)
August 9, 2016 3:42 pmby Jeffrey Wells
23 Comments
Because Guadagnino is The Honcho, He Can Re-Make Suspiria Any Damn Way He Pleases

Shooting on Luca Guadagnino‘s remake of Dario Argento‘s Suspiria begins next month in Berlin. Guadagnino says his version will be set in 1977, the year Argento’s cult-classic original was released, and will be about “about the mother, the concept of motherhood and the uncompromising force of motherhood”…whatever that means.

Indiewire‘s Eric Kohn, currently covering the Locarno Film Festival, sat down with Argento and asked for his reaction to Guadagnino’s film. Argento disapproves. The original, he explained, “has a specific mood. Either you do [the remake] exactly the same way — in which case, it’s not a remake, it’s a copy, which is pointless — or, you change things and make another movie. In that case, why call it Suspiria?”

Guadagnino (A Bigger Splash) is doing what he wants because he can, and because the Suspiria rights are secure. He’s at the peak of his powers right now, and there are no rules — he can do anything. And he’s sticking with Argento’s original title, I presume, because it has a certain brand value, and because it sounds cool.

But let’s be honest. Outside of a relatively small community of critics and cultists nobody (Gudagnino included, I’m guessing) cares very much what Argento thinks or wants. I certainly don’t. I respect the fact that he created a distinctive, critically respected Euro-exploitation brand starting in the late ’60s, and that he kept it going into the early aughts. Argento’s style is very much his own. He’s painted his films with a classier and more inventive brush-style than other sex-horror exploitation filmmakers (i.e., his imitators), but Guadagnino strikes me as hipper and more clear-light, and he’s obviously no genre hound.

“A corporate risk-management consultant (Kate Mara) has to decide whether or not to terminate an artificial being’s life that was made in a laboratory environment,” blah blah. What’s Paul Giamatti so hostile about? He’s yelling at the poor “artificial” (Anna Taylor-Joy) ten seconds after they sit down. Trying to antagonize her, I gather, but the trailer doesn’t give you enough information. The thing feels rushed, hasty. Morgan, directed by Luke (son of Ridley) Scott, is based on a 2014 Black List script by Seth W. Owen. I don’t like it. I just don’t like it. It doesn’t feel careful or well considered. Certainly not as represented by this trailer. Costars include Jennifer Jason Leigh, Chris Sullivan, Michelle Yeoh and Toby Jones.

I’ve never been much of an Olympics watcher. Never. I’m strictly a watch-the-highlights type, if that. But I’m even less into the Rio de Janeiro games, if that’s possible, due to those images of raw sewage that won’t leave my head. I know — shut ’em out, focus on the stadium images. But all those stories about untreated crap flowing into Rio’s Guanabara Bay (“the shittiest Olympics ever“) have infected my attitude. If nothing else the sewage coverage has persuaded me to never fly down there. I don’t know why I’d go anyway, but now Rio is really at the bottom of my list. I’m more of a Caribbean island and Central America type of guy anyway when we’re talking exotic western hemisphere travels. I visited Argentina, once, when I covered the Mar del Plata Film Festival. South America has never held a fascination. 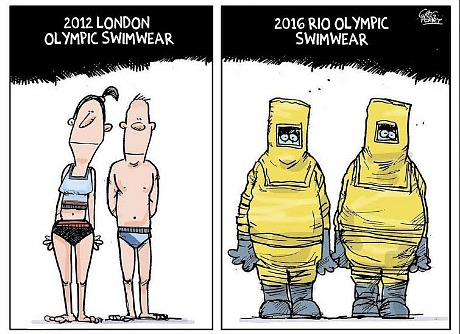 For those who didn’t attend the 2016 Sundance and Cannes festivals and who don’t plan on hitting Telluride or Toronto, the just-announced slate for the 54th New York Film Festival (9.30 to 10.16) will be full of the usual excitement and nutrition shots. The NYFF is always a great thing to settle into. To attend this annual gathering is to sense that you’re alive and attuned and a reveller in a very rich Manhattan scene, a celebration and meditation about movies that matter most, just as those who attended this festival in 1963 or ’78 or ’99 were also plugged into the films and currents that were essential back then. For two weeks in early October it’s the ultimate well, the place to be.

But for festival veterans like myself it’ll mostly be a “greatest festival hits of 2016” recap. Not entirely but mostly.

If I were attending I’d be focusing on a combination of unseen curiosities and special faves: Barry Jenkins‘ buzzed-about Moonlight, Paul Verhoeven‘s Elle (which I missed at Cannes, partly due to my schedule but also because Sony Classics refused to screen it before the official debut), Kenneth Lonergan‘s Manchester by the Sea, Olivier Assayas‘ Personal Shopper (one of a handful of 2016 films that I consider to be truly riveting and extra-level), Ava Duvernay‘s The 13th (not a study of the 13th amendment but “an in-depth look at the prison system in the United States and how it reveals the nation’s history of racial inequality”), Mike Mills‘ 20th Century Women (I’ve heard good things but also a meh comment), Pablo Larrain‘s Neruda and James Gray‘s The Lost City of Z (the Charlie Hunnam factor gives me concern).

There may also be a special sneak preview (a highlight that NYFF director Kent Jones hasn’t included for the past couple of years) and perhaps an extra sidebar attraction or two.