Support on Patreon Follow @wellshwood
15 Comments
The Organ Grinder Is In Heaven, But The Monkey Lives On

Last Thursday night (8.25) the legendary Jerry Lewis, 90 and undimmed and snap-dragonish as ever, conducted a 45-minute q & a inside Santa Monica’s Aero theatre. It followed a screening of Daniel Noah‘s Max Rose, in which Lewis gives a somber, nicely restrained and often moving performance as an elderly widower coping with a discovery that his deceased wife (Claire Bloom) had a secret boyfriend on the side for decades. 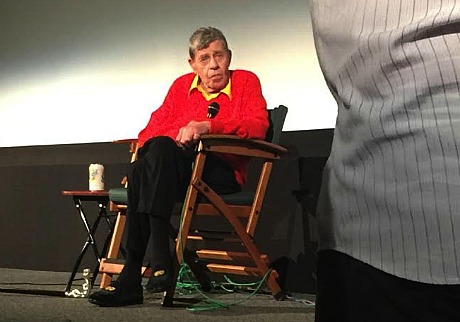 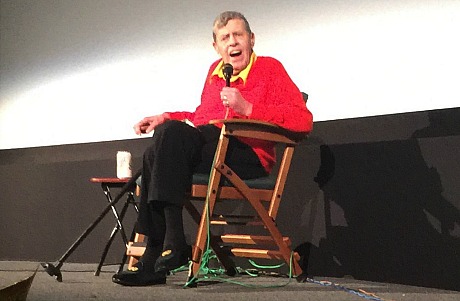 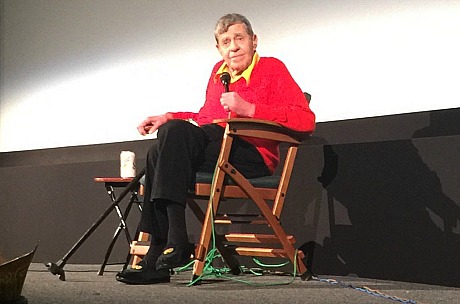 The film (which I’ll review tomorrow) is satisfying, well-honed, meditative. Lewis conveys a fair amount of solemnity but the film isn’t overly maudlin or doleful, which is what you might expect from a tale about a cranky…okay, blunt-spoken old guy.

The respect and satisfaction I felt for Max Rose was a tiny bit surprising given the film’s difficult experience at the 2013 Cannes Film Festival. After negative reactions were heard following an early screening, a decision was made to cancel a press screening. And that was over three years ago.

But I wasn’t the least bit surprised that Lewis was his usual snippy self during the q & a. No withered old codger, he. Most people become kinder and gentler as they get into old age. But not Lewis, bless him.

He was witty and corrosive at the Aero, obliging and polite in response to some questions but impatient with or dismissive of roughly 65% or 70% of the others, often critical or puzzled or unable to hear clearly or otherwise irked (“Why are you shouting?”) and getting laughs in any case.

If you ask me Lewis’s irritability is glorious.  This is his act, what Lewis does. If you ask me he’s raging against…well, a lot of things. But I love that he’s not just sitting there grinning and talking about how happy he is and how lucky and blessed his life has been and yaddah yaddah.

Speaking of Steve Jobs, there was a thing that happened at Universal’s Telluride after-party that I’ll never forget. The reactions to Danny Boyle‘s film following the 9 pm screening were up and down, this and that. Outside of the glad-handers, nobody I spoke to in the immediate aftermath was 100% about it.

I knew as I approached the gathering at 221 South Oak I knew I’d have to be careful not to say anything too candid. But I nonetheless found myself speaking quite honestly to First Showing‘s Alex Billington, and I soon realized he felt as I did, to wit: Jobs was a good, respectable, well-acted film, but it wasn’t very likable.

Boyle, screenwriter Aaron Sorkin, costars Kate Winslet and Seth Rogen, three or four Universal publicists and Apple co-founder Steve Wozniak were right nearby but we were cautious and careful. We kept our voices down to a murmur.

The small party began to fill up, and then Hollywood Reporter award-season columnist Scott Feinberg walked in and I went “hey, Scott!” and motioned him over, and without giving the invitation a moment’s thought Scott smiled but at the same time shook his head and went “noooo…no, no” and kept on walking toward the rear of the restaurant.

“What was that about?,” Billington asked.

“He doesn’t like the film any more than I do,” I speculated, “but he doesn’t want to discuss anything with the filmmakers standing ten feet away. He probably figured I’d challenge or debate him and he doesn’t want to do that within spitting distance of Seth Rogen. He’s just being careful.”

It’s taken me almost a full year to fully refine my 2015 Telluride Film Festival review of Danny Boyle‘s Steve Jobs to its essence. To really boil it down, I mean, and come to a clearer understanding of what I was getting at.

Here’s how I put on 9.6.15: “Am I a hotshot columnist from West Hollywood or a Riverside County housewife who goes to movies for emotional soothings? I’m better than that and so is the exceptional, high-throttle Steve Jobs.

“Jobs is a three-act ‘talk opera’ (Sasha Stone‘s term) or ‘verbal action film’ (a guy at Universal suggested that one) or aggressive cine-theatre (my own) but also a film that, for me, feels more impressively conceived and poundingly ambitious than affecting or, truth be told, likable.

“You have to take each film by its own scheme and determinations, and with a film as aggressively verbal and drill-bitty as Steve Jobs terms like “affecting” and “likable” are almost certainly beside the point. With a film like this you either you jump on the luge and submit to the speed and the brain-cell exhilaration…or you don’t. And what would be the damn point of not submitting to it?

“I jumped on, all right, and by the end of the two-hour ride I felt tingly and throbbing and, yes, a bit drained and also a teeny bit sorry that I wasn’t as delighted as I’d expected to be. Which I fully concede is at least partly my fault as I’d fallen head-over-heels in love with Sorkin’s script two or three months ago. Dazzled by it, glad-to-be-alive contact highs, ‘this is what brilliance feels like,’ etc.

“You see a certain movie in your head when you’re reading a highly charged, original-attitude script, and then you see the film’s version and it’s like, ‘Oh…well, okay, this is how they saw it.’ It never bored me, it kept me on my toes, it delivers a kind of hammerhead contact high…but I wasn’t feeling that levitational thing.