I don’t know how long this has been on Google Maps or how long it’ll last, but I captured it 30 minutes ago (i.e., 9:25 pm Pacific). I don’t know how many people besides Mark Ebner were on to it. Sunday, 11.27 update: I read late last night that “Dump Tower” had been removed, but it still appears if you type in “Trump Tower, New York, NY.” 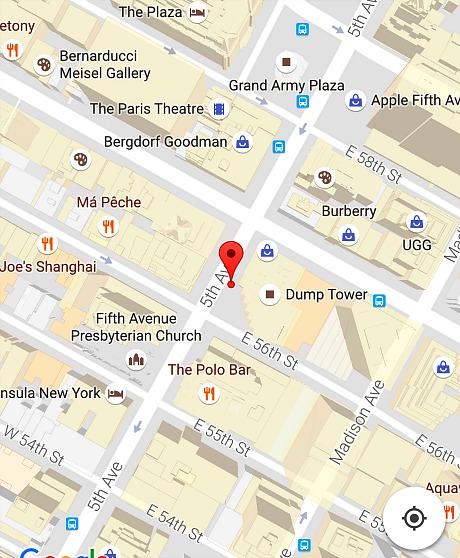 It’s lame of me to post this, especially given that it’s four days old, but the footage of Gary the cunnilingus dog, starting at 1:50, is worth it in itself. Never before revealed: Sometime in the fall of ’82 I was drinking with a bunch of actors at the old Cafe Central (75th and Columbus), i.e., the place where Bruce Willis used to bartend. Carrie Fisher was sitting a couple of chairs away from me. I waited for the conversation to downshift and then leaned over and said “hey” to her, told her my name, etc. She was in no way obliged to give me the time of day, but I thought I’d take a shot anyway. Bad idea. She gave me one of those looks that said “do you want trouble?” Alternate translation: “You’re saying hello for what reason again?” A voice told me I shouldn’t have, but I was batting around .400 back then and figured I probably wouldn’t hit a brick wall.

Silence musical composer Robbie Robertson to Toronto Star‘s Peter Howell on Martin Scorsese‘s latest (from 11.24 post): “It’s really unusual. It’s so different from anything he’s ever done. It’s different from anything around. The whole mood of this movie is different. It’s different visually, the visual tone of it. Some of (Scorsese’s) movies are bang, bang, boom, boom…this one is called Silence, and it’s a meditation — a painful one but beautiful.”

HE question: Painful in what sense? For the Andrew Garfield and Adam Driver‘s Jesuit priest characters, of course, but an underlying shudder hit me when I read that.

Which reminds me: The National Board of Review allegedly saw Silence a few days ago. It will screen for the NY Film Critics Circle on Wednesday, 11.30 — four days hence. On Tuesday, 11.29, Scorsese’s film will be shown to 400 Jesuits in Rome. Guild and Academy screenings will begin next weekend, the very first happening on 12.3. So why hasn’t Paramount sent out invites to big-city blogaroos like myself? If they were planning to screen it for guys like me sometime next week (i.e., between Monday, 11.28 and Friday, 12.2), they’d have said so by now.

25 Comments
The Fix May Have Been In

First came last Tuesday’s report by New York‘s Gabriel Sherman that Hillary Clinton was being urged by a group of prominent computer scientists and election lawyers to call for a recount in three swing states won by Donald Trump — Wisconsin, Michigan and Pennsylvania — which, they strongly suspect, may have been manipulated or hacked.

Then yesterday’s (11.25) Washington Post piece by Eric Chenoweth, co-director of the Institute for Democracy in Eastern Europe, reminded that there is abundant evidence that Russian hackers elaborately interfered in U.S. election process over the past several months.

And now comes today’s news that Hillary Clinton’s campaign will support an election recount effort, launched by Green Party candidate Jill Stein, in the battleground state of Wisconsin. TheWrap reports that “as of Saturday morning, Stein’s campaign raised more than $5.7 million online,” and that “the Green Party’s plan is to also file recount efforts in the swing states of Michigan and Pennsylvania.” Which the Clinton campaign is also down with.

Are these recounts likely to change the winner of the Presidential election? No, but if hackers (Russian or otherwise) managed to wrongfully swing a significant number of votes to Trump in any of these three states, that information should be obviously be aired and howled about.

Speaking at the recent Airb&b Open Conference in Los Angeles, Gwynneth Paltrow shared some thoughts that suggested she’s open to the idea of being in Donald Trump‘s corner, or at least that she’s potentially receptive to the social convulsions that Trump’s Presidency might bring about.

“It’s such an exciting time to be an American because we are at this amazing inflection point,” Paltrow said. “People are clearly tired of the status quo, and…it’s sort of like someone threw it all in the air and we’re going to see how it all lands. It’s very important for me, personally, now more than ever, to create a community and to remember the humanity of everybody and to create love and…understanding. The most amazing thing for me about this election is I felt…‘I don’t understand the opposition well enough at all.’ I’m not going to tell you what side I’m on, but my big takeaway was, ‘I really need to open my mind and understand better because I don’t.’”

At the very least Paltrow has joined that odious community, headed by Jimmy Fallon and Oprah Winfrey, that has sought to normalize Trump by suggesting that he’s not so bad. May she suffer for this.

This five-day-old Apple ad (“Frankie’s Holiday“) is perfect. Delicate, compassionate, handsome, performed just so, exquisite cinematography. The director is Park Pictures‘ Lance Accord, who directed “Misunderstood,” the awesome 2014 Apple ad. He also did the cinematography for Spike Jonze‘s Where The Wild Things Are and Adaptation and Sofia Coppola‘s Lost in Translation, Lost in Translation and Marie Antoinette. Frankenstein’s monster is played by Everybody Loves Raymond‘s Brad Garrett, who stands 6’8″. Fair question: Apart from “Frankie” playing a Perry Como tune on an iPhone, what does this ad have to do with Apple product? Answer: Nothing.

11 Comments
Before You Dismiss Castro Out Of Hand

Before Castro the U.S. had long regarded Latin America as fertile territory to be exploited. The Monroe Doctrine basically stated that European powers were to leave Latin America alone so we could exploit it for our own interests. The building of the Panama Canal was a constructive trade enabler, but primarily one of many operations that was mostly about serving U.S. interests.

We allied ourselves with Central and South American military regimes all through the 20th Century — i.e., right-leaning frontmen for the oligarchs (i.e., the upper-crust elite), which have always been in league with U.S. interests and the coldly capitalist, market-driven finaglings of the International Monetary Fund. And the lower classes have always had to eat bean dip.

The CIA engineered a coup d’etat in Guatamela in 1954 against a Democratically elected leader, Jacobo Arbenz Guzman, because he was too independent-minded, not enough of a U.S.-favoring toady. In 1973 we helped engineer a brutal coup against Salvador Allende in Chile for the same reason.

Remember that Havana boardroom scene in The Godfather, Part II in which Batista confers with Michael Corleone and the heads of other U.S. corporate interests (i.e., the “United” Telephone & Telegraph company, United Fruit)? Did you get a feeling from that scene that these were good guys following humanistic impulses?

For all his flaws Fidel Castro was the first strong Latin American leader to assert nativist independence and tell U.S. interests to back off. As Oliver Stone‘s South of the Border explained a few years ago, almost all of South America had elected similar nativist leaders in the 21st Century — the late Hugo Chavez of Venezuela, Bolivia’s Evo Morales, Brazil’s Lula da Silva, Argentina’s Cristina Kirchner (along with her husband and ex-President Nestor Kirchner), Paraguay’s Fernando Lug and Ecuador’s Rafael Correa — a sea change that was partly inspired by Castro.

We tried to oust and assassinate Castro in the ’60s, remember. We enabled him to be an alarmist and, for a time, to rally the Cuban people against us. We gave him the rationale, the fuel to run Cuba with a severe ideological hand — no question. If Castro was a tyrannical asshole, the U.S. provided the abusive influence that led to that mentality.