Support on Patreon Follow @wellshwood
6 Comments
Gets In The Way

Posted on 12.12.16: “I haven’t posted any opinions about Gold (Dimension, 1.27.17), but I’m not in the least bit surprised that Matthew McConaughey‘s performance as ‘Kenny Wells’ (a gold-prospecting character based on the real-life John Felderhof, who figured prominently in the Bre-X financial scandal of the ’90s) is being bypassed for awards action. For McConaughey’s performance is the most annoyingly actorish he’s ever given, crammed with makeup and affectations — a bulky weight gain, a mostly bald head, fake teeth, an attitude of oily greediness and the relentless smoking of cigarettes in every damn scene. The only thing McConaughey doesn’t do makeup- or affectation-wise is (a) walk with a pronounced limp or (b) wear a Quasimido-like hunchback prosthetic. The McConnaissance was over after Sea of Trees, but his Gold performance made me want to run and hide — no offense.”

December 17, 2016 5:41 pmby Jeffrey Wells
45 Comments
Passengers Cat Is Out Of The Bag Also — Mother Of All Ethical Hangups In A Movie Theatre 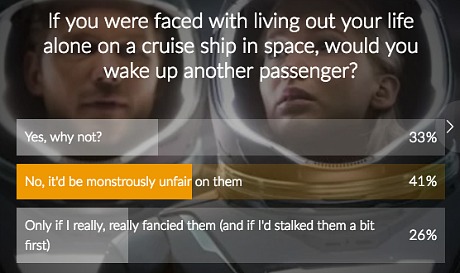 Every so often I’ll write about the average person’s strange inability (refusal?) to sing the “Happy Birthday” song on key. It happened again last night at the home of director Phillip Noyce. 30 or so guests wished a good one to his beautiful wife, Vuyo Dyasi, but the singing hurt. And some of them were showbiz people, whom you might think would have some respect for the idea of hitting notes. Listening to that song being murdered is awful. I was standing next to two of the assassins, and I couldn’t even imitate how horrendously off-key they were. Imagine a Vietnamese water buffalo groaning while being repeatedly stabbed in the chest.

That aside, it was a lovely holiday gathering. Great people, good food and real Chicago-like temperatures (as it was partly happening in the back yard). Thanks for inviting me, guys.

Posted on 7.31.13: “I can’t sing like a professional or even a gifted amateur, but I can definitely sing ‘Happy Birthday’ on-key. Which is more than 97% of your Average Joes and Janes can manage. I can’t tell you how many times I’ve listened to a table of restaurant revelers try to sing it and not hit a single true note. It’s pathetic. We’re not talking about singing ‘The Star-Spangled Banner’ here. Bad singing is all about emotional timidity. Singing on-key takes a certain open-heartedness. You can’t be covert about it. All I know is that every time a table launches into ‘Happy Birthday’ I grimace and go “oh, God…here we go.”

Two days ago North Carolina Republican legislators pushed through two bills that will hamstring Governor-elect Roy Cooper. Yesterday outgoing Gov. Pat McCrory signed the bills. A naked, venal power-grab by N.C. righties — what else is noew? Huffpost’s Julia Craven: “Cooper was up by 4,300 votes on Election Day and continued to rise in the count. Instead of bowing out graciously, McCrory asked that all provisional ballots be counted, formally called for a statewide recount and made brash allegations of voter fraud before finally conceding on 12.5.” Here’s a Daily Kos account of what happened on 12.15. A video capture of what happened after the jump:

Life can be hard and cruel and sometimes shattering, but few have ever had to cope with the kind of mind-numbing horror that slapped Jackie Kennedy across the chops on 11.22.63. And then she had to carry the weight for everyone, the weight of that whole terrible four-day pageant, and somehow the after-vibes have never quite gone away, even with the passing of 53 years. Ask anyone who was over the age of ten back then (i.e., boomers who are now over 60) and they’ll tell you all about that day, that pall, that weekend, that ache-athon that was broadcast morning, noon and night for over 80 hours straight.

It was therefore brilliant and kind of brash for Pablo Larrain to avoid the usual-usual in the making of Jackie — to sidestep that mass memory and not deliver a rote recap of what Mrs. Kennedy, only 34 at the time, went through that weekend, but to make a kind of art film — to give her portrait a kind of anxious, fevered, interior feeling. And yet it’s a saga of strength and steel — a woman who held it together and led a nation.

Larrain called for a rewrite of Noah Oppenheim‘s original 2010 script, cutting out many if not most of the well-known figures who had speaking parts and pruning Jackie down to what it is now — intimate, half-dreamlike, cerebral, not entirely “realistic” but at the same time persuasive and fascinating.