Support on Patreon Follow @wellshwood
15 Comments
“No, Stupid — That Was A Miracle!

In the view of Vulture‘s Abraham Riesman, the most famous shot in Alfonso Cuaron‘s Children of Men is the six-minute, 19-second unbroken take in the third act, showing Clive Owen winding and lumbering through a dusty, blown-to-shit refugee camp, dodging gunmen and bullets and tanks and blasts of shrapnel.

“I think we had 14 days to shoot the whole set piece, except by day 12, we hadn’t rolled cameras yet,” Cuaron tells Riesman. On the afternoon of the 13th day, they were finally ready to film. But around the 90-second mark, Cuarón yelled ‘cut’ because, as he puts it, the take ‘was just wrong.’ The reset took five hours, meaning they lost the daylight and had to go home. The morning of the final day dawned, and they gave it another stab. The cameras rolled, the scene commenced — and then camera operator George Richmond tripped and the camera fell. Five hours of reset later, Cuarón had only one chance left.

“Action. Owen ran, Richmond followed, and astoundingly, all was going smoothly. They got to a hollowed-out bus filled with people, through which Theo is supposed to scamper. Suddenly, one of the squibs misfired and, horror of horrors, a squirt of fake blood landed on the lens. Cuarón, watching on a monitor, felt his world collapse. ‘I yell, ‘Cut!’ he says, recounting the moment like a ghost story. ‘But an explosion happens at the same time, so nobody hears me.’

“The camera kept rolling, and Cuarón realized he had no choice but to let it play through, even though he was sure the shot was ruined and had no idea how he would proceed.

Listen to this passage from Carrie Fisher‘s one-woman show Wishful Drinking, a riff about how a fairly good friend of hers, a gay Republican lobbyist named R. Gregory Stevens, died in her bed in ’05. It’s great stuff. Waking up with a corpse.

Once you’ve done that (or while you’re doing it), consider her wit and laughter and the extremely sad fact that the shit year of 2016 had one more card up its sleeve, it turns out, and it dealt it off the bottom of the deck at 8:55 am this morning: Fisher herself is now dead. 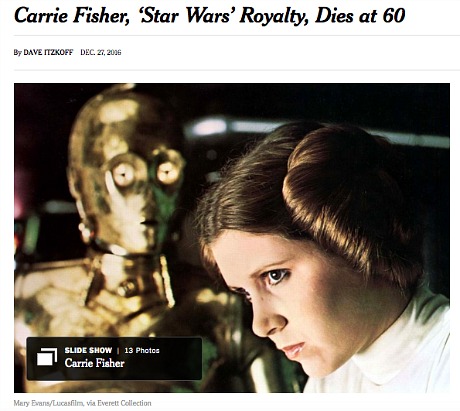 I’m as stunned and saddened as the next person. I thought she might be out of the woods. That “stable condition” tweet that her mom, Debbie Reynolds, shared yesterday seemed to indicate that.

I don’t know anything about heart conditions and heart specialists, but you have to presume there was some reason that the word “stable” was passed along by some medical authority.

12:50 pm update: I’ve just been told that if a person stops breathing and has no pulse for more than eight minutes, they’re history. Even among those who are revived within the eight-minute limit, over 90% don’t make it. It reportedly took paramedics 15 minutes to get Fisher’s pulse going after her plane landed.

Fisher was a good actress/performer but a much better author and screenwriter, and generally a brilliant wit and raconteur. Her best works were the book and screenplay of Postcards from the Edge and her autobiographical one-woman play and its nonfiction book, Wishful Drinking.

From publicist Simon Halls: “It is with a very deep sadness that Billie Lourd confirms that her beloved mother Carrie Fisher passed away at 8:55 this morning. She was loved by the world and she will be missed profoundly. Our entire family thanks you for your thoughts and prayers.”

Earlier: The finality began when Fisher suffered a serious heart attack on a London-to-Los Angeles flight three days ago (i.e., Friday, 12.23). She reportedly wasn’t breathing for a long period. It didn’t look good — hell, it looked bad. Then came a word of hope yesterday. And now this.

It was Fisher, remember, who asked the question in an Interview piece that indicated Daisy Ridley didn’t know who Cary Grant was, or didn’t know much.

I was at a party somewhere in the hills about ten or twelve years ago, and at one point I had a chat with Bill Maher and his girlfriend-of-the-moment. Quite the festive event, lots of crazy giggling and inebriation. And then I saw Carrie Fisher arrive and said to myself, “Oh, wow…all the party people are here.”

This is a very significant (i.e., chilling) boomer death, and obviously a heavy one for the ComicCon crowd. I feel very, very sorry for everyone close to Carrie — her daughter, mom, brother, all the friends and colleagues, Bright Lights co-directors Alexis Bloom and Fisher Stevens, etc. Sad day.