Support on Patreon Follow @wellshwood
147 Comments
Take Your Pick: (a) Trump Is Really Pissed, (b) Yellow Peril, or (c) The Beatles’ “Golden Showers” 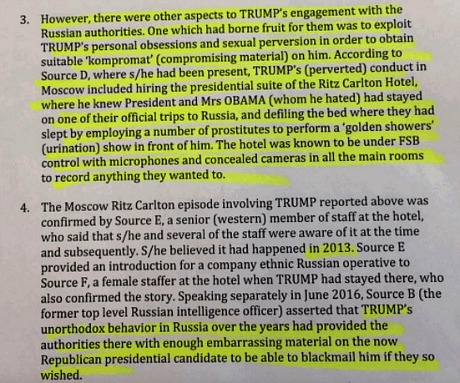 If it weren’t for the 2017 Sundance Film Festival, Hollywood Elsewhere would be flying east on the day of Orange Orangutan’s inauguration to take part in the Women’s March on Washington (Saturday, 1.21). The fallback is a Sundance Women’s March that Chelsea Handler is beating the drum for. The Facebook page makes it clear that dudes are totally welcome so I’ll be there with bells on. Marchers will congregate behind the Wasatch Brew Pub (220 Main St. Park City) at 9 am and march down Main. A couple of thousand people may show up — possibly more. The event is expected to end by 11 am. 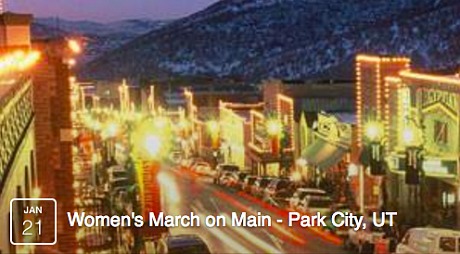 Suggestion to organizers: If the march is confined just to downtown Park City, it’ll be over within 15 or 20 minutes. That’s all it takes to walk from the top of Main to the bottom. It would be cooler and more of a “thing” if the march hangs a left on 9th Street and just keeps going down Park Avenue, past the Park City Library and all the way to the Doubletree (formerly the Yarrow) parking lot. Question: What’s the anti-Trump chant or slogan? Another suggestion: Find some drummers, make some banners and placards. Aural/visual impact counts.

“But maybe they aren’t politicians any longer. They have become instead pantomine villains whose real job is to make us angry. And when we are angry, we click more. And clicks feed the ever-growing power and wealth of the corporations that run social media. We think we are expressing ourselves, but really we are just components in their system. At the moment, that system absorbs all opposition, Which is why nothing ever changes.” — from Adam Curtis‘s Hypernormalization, a 2016 BBC documentary that popped on 10.16.16 16 on the BBC iPlayer. Curtis’s basic thesis (per Wiki page) is that “since the 1970s, governments, financiers, and technological utopians have given up on the complex ‘real world’ and built a simple ‘fake world’ that is run by corporations and kept stable by politicians.”

In other words, we’re living in a much more Orwellian big-brother realm than most of us realize.

3 Comments
Man of Ease and Honor

Svetlana Cvetko, DanceCameraWest exec director Tonia Barber and I attended a UTA screening of Hidden Figures last night. Ted Melfi‘s film was introduced by Melissa McCarthy. After it ended costars Kevin Costner and Octavia Spencer did a q & a with director-writer Melfi, and then everyone chit-chatted at a nearby reception. The big news was that last weekend Figures not only had a bountiful reception ($25 million and change) and managed to beat Rogue One for the #1 slot by $750K.

Sidenote #1: Besides being excellent as the big NASA honcho in Hidden Figures, Costner is tall. He was wearing cowboy boots but he has me by a good inch, and I’m just under 6′ 1″. Sidenote #2: Before driving back to his Carpinteria home, Costner mentioned his band, Modern West, and their 2012 album, “Famous For Killing Each Other: Music From and Inspired by Hatfields & McCoys.” 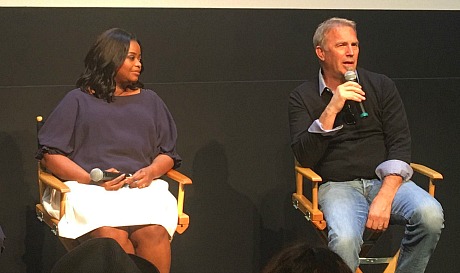 When I read this morning that the Producers Guild of America voters had nominated Arrival, Fences, Hacksaw Ridge, Hell or High Water, Hidden Figures, La La Land, Lion, Manchester by the Sea and Moonlight for their Daryl F. Zanuck award (i.e., the equivalent of a Best Picture prize)…well, I nearly fell over in my chair. It’s a good thing I have a few percocets left because I needed something to calm myself down. I was literally vibrating.

Seriously, no one is very interested. You have to report on the various guild noms because you have to, but that doesn’t mean they’re of any special interest.

The only PGA-nominated film worth mentioning is a film not worth mentioning — i.e, the reprehensible Deadpool, which I called “a glib, porno-violent Daffy Duck cartoon” while I reviewed it a little more than eleven months ago. I don’t want to think about why this thing was nominated, not just by the PGA but also the WGA guys.

If the ghost of Daryl F. Zanuck was capable of processing the PGA’s bizarre admiration for this wretched joke of a film, his shrieks would be heard among the clouds. He would curse and punch a refrigerator door and then return to earth in order to confront the membership at the next meeting. “You’re nominating a piece of shit like Deadpool? I know it can’t win but this award has my name on it, dammit!”

39 Comments
Attractiveness Seeks Its Own Level

Do some people-watching inside any cafe or restaurant or semi-exclusive party and you’ll notice that healthy couples (i.e., unions that aren’t based on the guy being rich and the woman being a gold-digger) always seem to be similarly attractive. If a woman is a 7.5 or an 8 she’ll tend to be with a guy who’s a 7.5 or an 8. Birds of a feather, etc. And so I always react negatively when this rule of thumb is ignored by hip filmmakers because of…you tell me, p.c. guidelines or whatever. Because this is not how it is out there.

Case in point: John Ridley‘s Guerilla, a six-part Showtime miniseries set in ’70s London. Because leading costar Freida Pinto is totally choice — anyone’s idea of an 8.5 if not a 9 — there’s no way I’m buying Babou Ceesay as her boyfriend. Too chubby, not good-looking enough, nope. Pinto and Ceesay are roughly equivalent to Grace Kelly and George Gobel being paired off in a 1954 romance of some kind. Or Faye Dunaway and Allen Garfield in a ’70s flick.

This 42 year-old Mike Douglas Show clip is worn and tattered, but it’s the shit. Really. Because it allows you to meditate upon the great Muhammad Ali and his refusal to embrace liberal inclusiveness as it was known in 1974, and his obstinate, unyielding insistence that the only thing he cared about was the living conditions of black people and that other tribes need to fend for themselves. (What would the young Ali be saying now about Donald Trump?) Sly Stone was obviously stoned or drunk. Congressman Wayne Hays, who would resign two years later over the Elizabeth Ray sex scandal, offered many of the positive sentiments that mainstream neoliberals were saying back then. Theodore Bikel was his usual moderate, sensible self. Here’s the whole kit and kaboodle.

In nominating Jeff Sessions as Attorney General, Donald Trump was saying “this is another expression, people, of where I’m coming from and what my election was all about — the resurgence of whiteness and white cultural dominance, and a modest but effective suppression of the multiculturals. We’ll try to put a happy face on it, but these folks are not going run the show as much, trust me. The Obama years are over, and we’re not gonna take any shit.”

Do I, Jeffrey Wells, have the courage and conviction to rant during a confirmation hearing and get myself tossed out and maybe arrested? If past behaviors are any indication (and they are), the answer is “uhhm…well, not really.” I’ve always run alongside the action, staying close but mainly as a cautious observer, like Robert Redford would have behaved in a ’70s movie about street protests. I’ve never been thrown out of anything, never been punched or billy-clubbed by a cop. I take potshots from the side.