An L.A. Times story by Ryan Faughnder reported this morning that Cinepolis, a Mexico-based theatre chain, is hoping to attract an increased family trade “with a new in-theater playground concept, Cinepolis Junior, which [will make] its U.S. debut at two Southern California locations next week.

“The remodeled auditoriums at Cinepolis USA’s Pico Rivera and Vista theaters each feature a colorful play area near the screen in front of the seats, a jungle gym and cushy beanbag chairs.”

The idea, Faughnder writes, is that “the kid–oriented theaters, which charge up to $3 more than a regular ticket, will better compete with Netflix and other at-home options by enticing more parents and children to go to the theater. Designed for ages 3 to 12, the two children’s auditoriums will open on 3.16 with showings of Disney’s Beauty and the Beast remake.”

March 7, 2017 2:00 pmby Jeffrey Wells
11 Comments
I Was Actually Rougher On Jackson’s Kong Than I Recalled 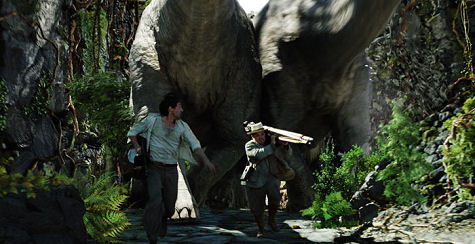 Sen. Al Franken a couple of hours ago: “I’ve bent over backwards not to say that Attorney General Sessions lied…he has to come back.”

I’ve been told that Kong: Skull Island (which I’m seeing tonight at the Arclight) isn’t tracking as strongly as it could or should. Word around the campfire is that it’s “kind of sandwiched in between Logan and Beauty and the Beast,” as one guy put it this morning, and that this might lead to an underwhelming performance on some level.

Instead of matching or even challenging Logan‘s $88-million first-weekend haul, Kong might be turn out to be more of a mid 50s thing by Sunday night. Which doesn’t sound bad until you consider the rumored $190 million budget, not to mention the p & a tab.

From a 3.2 HE comment thread, written by yours truly: “If I’ve learned one thing, it’s that a significant portion of moviegoers don’t necessarily flock to a really clever, well made, high pizazz film. Some will this weekend, of course, but not all. The slow boats tend to hold off and wait UNLESS it’s a completely safe piece of shit like Jurassic World. Quality scares them on some level. They like brand comfort.

At some point something snapped in my mind. I literally flinched and shook my head when I suddenly realized a kind of poison had been streaming into my system for hours and that I had to turn it off if I didn’t want to get sick or go crazy.

General-access cable and broadcast is aimed at the American mouth-breathing mongrel class, and you can see how it inspires people to lead lives that are devoid of spiritual content…lives that are almost certainly dulled-down, compromised and shortened as a result. The only civilized way to watch anything these days is via apps (Amazon, Netflix, Vudu) and elite cable. What a cultural cesspool regular-ass TV has become. It attains such levels of toxicity that it seems natural and inevitable that regular watchers would turn into slow boats and cretins. The influence of mongrel TV is almost certainly one reason why Trump caught on.

Imagine being a relatively talented director, screenwriter, dp or craftsperson, ready and eager to work, create and possibly make history, and the only work you can find is in the horror genre. And after a few tries at expanding your realm you gradually realize you’re stuck there and will never get out — a clock-puncher in the horror factory for the rest of your life. Yes, horror carries a higher prestige factor than porn because there’s at least a slim chance that a mainstream breakout could happen, but it’s also a level or two below fantasy-superhero CG crap, which is a dungeon in itself.

Imagine waking up every day, looking in the bathroom mirror and realizing, “God, I’m still chained to this godawful racket…a lowly horror-film worker, a prisoner of gore…trying to be or at least work with the new Guillermo del Toro, Tom Holland, Wes Craven, Tom Savini, Sam Raimi, George Romero or John Carpenter but knowing deep down that the odds are heavily against me…hate myself, hate my life, hate the horror-fan conventions I’m forced to attend to so I can earn pocket money by handing out autographs and posing for photos.” Can you imagine?

Rep. Jason Chaffetz (Utah, R): “Americans have choices…they’ve gotta make a choice. Rather than getting that new iPhone that they love and they wanna spend hundreds of dollars on, maybe they should invest in their own health care.” Translation: “Poor shiftless Americans, many if not most of whom are non-white supporters of Democratic causes, have a long history of living louche, indulgent lifestyles that are fiscally irresponsible. 47 years ago Guy Drake, a great American, pointed this out when he wrote and recorded a popular folk song called ‘Welfare Cadillac‘, the lyrics of which still resonate today. Cadillacs, iPhones…the poor have to learn to show a little discipline and do without the luxuries.”