Showtime’s page for The Beach Boys: Making ‘Pet Sounds’ (4.7, on demand 4.8) says that the doc is “celebrating the 50th anniversary” of Brian Wilson’s landmark album. But of course it isn’t. Pet Sounds was recorded between 7.12.65 and 4.13.66, and was released on 5.16.66, so the doc might as well celebrate the 51st anniversary. I’m presuming that it happened because of Bill Pohlad‘s impressive recreations of the making of this album in Love & Mercy. It would be more interesting, I feel, to see a doc about the making of Smile — the saga of how it was recorded and then abandoned and then reborn in the 21st Century.

Filed from Park City on 1.22.17: “Craig Johnson‘s Wilson (Fox Searchlight, 3.24) is basically about a middle-aged, passive-aggressive malcontent (Woody Harrelson) who’s way too friendly, way too open, doesn’t edit himself, has no social skills. He smiles sweetly and blathers on about anything that comes into his head. Free and unrestricted commentary about this, that and the other thing, and without a point or a strategy of any kind. Except to convey that he’s a passive-aggressive malcontent.

“Wilson is a sweet, kind-hearted guy who will never ‘fit in’ to any semi-conventional social congregation because he really has no idea what the word ‘dignity’ means. One of my definitions of that term is being able to sense when it’s cool to say something in mixed company and when it’s best to shut the fuck up. This instinct is not in Wilson’s tool kit.

“He also seems incapable of understanding a concept that I’ve always respected, which is that sometimes you shouldn’t say anything unless you can improve upon the silence. There’s a lot of joy and peace in silence, but lovable social calamities like Wilson will never, ever be able to get that.

“Which is one reason why I would carefully limit my time with a guy like Woody’s Wilson if life had managed to install him in my orbit in some capacity. I wouldn’t necessarily cross the street or bolt in the opposite direction if I saw him coming, and I would never say anything cruel to the guy, but I would politely avoid him whenever and however possible.

“This is basically why I didn’t much care for Johnson’s film, which is based on an original script by Daniel Clowes. I didn’t hate it, but I wasn’t the least bit disappointed when it ended.”

Showtime’s page for The Beach Boys: Making ‘Pet Sounds’ (4.7, on demand 4.8) says that the doc is “celebrating the 50th anniversary” of Brian Wilson’s landmark album. But of course it isn’t. Pet Sounds was recorded between 7.12.65 and 4.13.66, and was released on 5.16.66, so it might as well be celebrating the 51st anniversary. I’m presuming that this doc happened because of Bill Pohlad‘s impressive recreations of the making of this album in Love & Mercy. It would be more interesting, I feel, to see a doc about the making of Smile — the saga of how it was recorded and then abandoned and then reborn in the 21st Century.

The only reason I’m writing about Alex Kurtzman‘s The Mummy (Universal, 6.9) is because I want credit for the “show me the mummy!” line. A screenwriter friend passed it along, and right away I said “that’s funny.” I’m not saying it hasn’t appeared somewhere else before (on some chat board or whatever), but I’m claiming it as an HE thing all the same, just like I put dibs on “Apocalypse Kong” for Kong: Skull Island.

In fact, I’m openly advising Universal marketing to use this line on the Mummy one-sheet…seriously. In the same way that Paramount wound up selling Mommie Dearest with Faye Dunaway‘s “no wire hangers!” line. A slogan that everyone will get right away, and which will take the heat off Universal — “Of course it’s a silly tentpole thing…what do you think those Brendan Frasier mummy movies were?…dope-crazy is what we wanted going in, it’s what we’ve got now and it’s what the popcorn crowd wants to see…relax! A stupid-ass Tom Cruise mummy flick that’ll be fun to see with your rowdy friends.”

Get real — The Mummy has seemed like a fairly silly film from the get-go, and now those chickens are coming home to roost with talk swirling around that “people are laughing at it” and that a recent test screening (which may or may not have happened in Glendale on March 8th) drew lousy numbers and that it may not be quite good enough to launch a Universal monsters franchise a la Marvel universe.

That’s what the basic game plan is — to use the success of The Mummy to generate excitement in a reboot of several classic Universal monster films — “a whole new world of gods and monsters” or words to that effect. That said, has anyone ever expected The Mummy to be anything more than a super-expensive piece of CG goofery? No. Was anyone taking it seriously when they made it? How could they? That Mummy trailer that popped last December makes it look like a satire of an absurdly expensive meta monster flick.

This is all loose talk, of course. Nobody knows anything, least of all myself. And you always need to take a few steps back when it comes to second-hand sources.

Beat The Devil aside, the attractions at the TCM Classic Film Festival (4.6 thru 4.9) that have my interest are as follows: (a) the nitrate films, all being shown at the American Cinematheque’s Egyptian theatre — Black Narcissus (’47), The Man Who Knew Too Much (’34), Laura (’44) and Lady in the Dark (’44); (b) a screening of Larry Peerce‘s The Incident (’67) which hasn’t been seen in any kind of shape for decades; (c) A Cinerama Dome screening of This is Cinerama (’52) in its original three-projector format; (d) a 3D showing of the recently restored Those Redheads from Seattle (’53), featuring commentary from 3D Film Archive restorationist and major HE aspect-ratio nemesis Bob Furmanek; and (e) a screening of a presumably restored Hell Is For Heroes (’62). 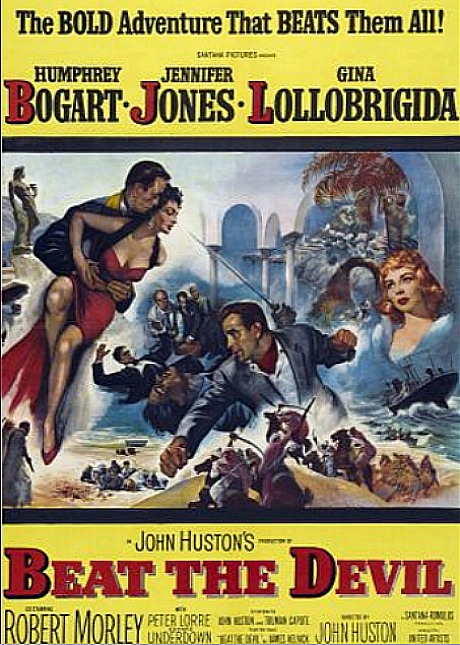 Directed by Anna Rose Holmer and starring a seriously pregnant Natalie Portman, this music video for James Blake‘s “My Willing Heart” is track #9 from Blake’s The Colour in Anything, a two-disc album which popped last October. Honestly? Some of the shots are too dark and murky. What’s point of shooting something if it prompts a viewer to complain “why didn’t the dp use a bit more light?” And Blake‘s falsetto voice, which reminds me of Simply Red‘s Mick Hucknall, has a delicate, ethereal quality. If I was a blunt, crude type, I would say he sings like a 9 year-old girl who hasn’t woken up yet.

March 20, 2017 11:15 amby Jeffrey Wells
20 Comments
FBI Director Comey Has No Evidence That President Trump Is Not A Lying, Smoke-Blowing Sociopath

“This is not a question of Donald Trump’s personal psychopathology, alarming as that question may be. The point is, rather, that Trumpism as a social-psychological phenomenon has aspects reminiscent of psychosis, in that it entails a systematic attack on our relation to reality. By continually contradicting himself and not seeming to care, Trump generates confusion in the members of the media and political opposition that has often rendered them ineffectual, especially in speaking to those outside the liberal base. They were slow to realize that he was playing by a different set of rules.” — from “Trump’s Method, Our Madness,” a N.Y. Times op-ed piece posted on 3.20 by Joel Whitebook, director of the Psychoanalytic Studies Program at Columbia University.