Trump Nation has always been about cultural animus (i.e., a dream of halting or even turning back the influence of the lefty multiculturals and the LGBTQs) and general despair about the gradual fraying of the traditional American fabric. They’re behind Trump because he seems (emphasis on the “s” word) to understand their concerns along these lines. Some simply aren’t bright enough to realize they’re being played. Others probably suspect the truth but can’t face it — they voted for this animal, and feel they’ve no choice but to keep applauding the narrative.

Okay, that’s a write-down or a “nope” for Bong Joon-ho’s Okja. It’ll play in competition at next month’s Cannes Film Festival, so I’ll be obliged to sit through it and all. Okja “is about a kind monster who is pursued by the Mirando Corporation for research, or likely something more nefarious, and a girl who works to protect her beastly buddy.” Costarring Ahn Seo-hyun, Tilda Swinton, Jake Gyllenhaal, Paul Dano, Steven Yeun, Lily Collins, Devon Bostick, Byun Hee-bong and Shirley Henderson. It pops on Nextflix on 6.28.17.

From Joseph McBride‘s just-released “Two Cheers For Hollywood,” and more particularly an introductory essay titled “I Loved Movies But…”:

“In recent decades we’ve had to deal with the generally awful state American mainstream movies have fallen into, and with the overall collapse of film culture and what used to be called cinephilia. This has led to widespread discussion by film critics and others about whether or not cinema is dead, merely moribund, or in the process of evolution into something innovative but as yet uncertain. We have to face the fact that we longer live in an age of cinephilia. I wouldn’t be honest if I didn’t admit that makes me terribly sad, [but] I haven’t yet reached the final stage of the grieving process — acceptance. 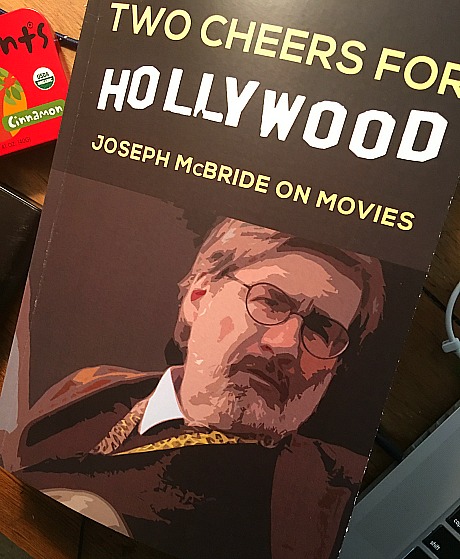 “Yet we who write about film history and have done so for decades persist in our quixotic quest. We go on because the love of film has become so ingrained in us that it can never be eradicated by time or circumstance. You make your choices early in life, and you do so because of what you need most early in life. Some of these needs linger forever.

“Writer and filmmaker Susan Sontag wrote in a much-discussed 1995-96 essay, ‘The Decay of Cinema,’ that the cinema had become ‘a decadent art’ mired in “an ignominious, irreversible decline. It’s not that you can’t look forward anymore to new films that you can admire. But such films not only have to be exceptions — that’s true of great achievements in any art. They have to be violations of the norms and practices that now govern movie-making everywhere in the capitalist and would-be capitalist word — which is to say everywhere.’

28 Comments
If It’s A Socially Reflective Genre Thriller, It Must Be Oscar Material

Invitation sent by mail on 10.12.56: “Please join Allied Artists, filmmakers and cast for a cocktail party in celebration of Don Siegel‘s Invasion of the Body Snatchers — ‘A triumph…a terrifying reflection of Eisenhower-era conformity and complacency’ — Manny Farber.” Invitation sent by mail on 11.24.88: “Please join Universal Pictures, filmmakers and cast for a buffet luncheon celebrating John Carpenter‘s They Live — “The horror of rampant yuppie greed and materialism delivered within the realm of a sci-fi thriller…social-exposure dramas are rarely this gripping or penetrating.” — Peter Rainer, American Film. 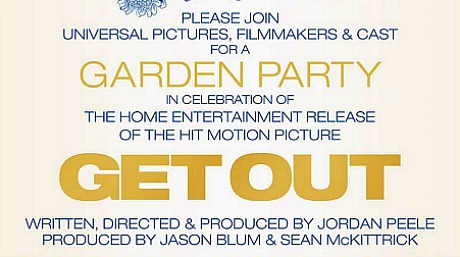 The baggy, dark-gray trousers (dress pants were extra spacious in the mid ’50s) are bad enough, but to wear them with casual sneakers? Appalling. I’d like to be gracious and say that Humphrey Bogart is so cool on his own terms that he pulls it off, but he doesn’t. You might assume from his late-1953 photo that Audrey Hepburn, 24 and fresh off Roman Holiday, is the same size as Bogart. He stood about five-foot-eight — Hepburn was roughly five-seven. 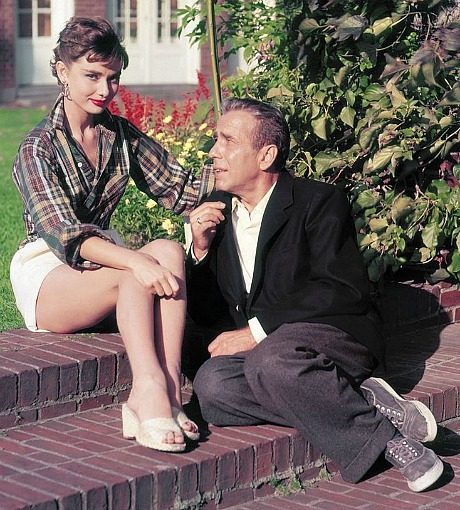 During last month’s Cinemacon I realized that the working-class Joes who flock to Las Vegas are in love with the massive scale of the place. 75% of the buildings in the Vegas tourist district are five, ten or twenty times bigger than similar establishments in Wichita Falls or Cranford.

These same culturally-challenged types are quite impressed by super-sized homes. If I was handed a gratis deed to a McMansion I would sell it and buy a regular people-sized home…you know, the kind of place that Americans and Europeans lived in for several centuries before the oversized aesthetic crept into the culture.

If you were loaded and could live anywhere you want, would you have the character and the taste to live in a home of sensible proportions? Two or three bedrooms and bathrooms instead of six or seven? Cozy dens, fireplaces, kitchens built for a family of four or five? The kind of homes that Joan Crawford, Kim Novak, Charles K. Feldman, Ronald Colman, Rod Serling and Cary Grant used to live in? Or the kind that Bob Evans, George Clooney and Jack Nicholson live in now?

I loathe gargantuan as a design concept. Giant-sized homes smell of arrogance and entitlement. Or insecurity. An architectural blight.

Another thing you want to avoid are restaurants and bars with a beautiful view, and especially people who love to patronize such places. Does this mean I don’t like the view from WeHo’s Soho House (9200 Sunset Blvd.)? No — I love it as much as the next guy, but I don’t want the company of people who flock there every night because of the view. I prefer to hang with people who think like me, who patronize a place because they’re down with the special vibe or atmosphere. Great-view restaurants on the penthouse floors of buildings are always a must-to-avoid — always jammed, always too pricey. If you’re out with a girl and she says “let’s go to that hot rooftop place,” drop her like a bad habit.

I was initially intrigued by Rodrigo Perez‘s review of Nathan Silver’s Thirst Street — “A wry and disturbed look at lust and longing…a terrific vintage homage…a deliciously arch little treat.” Set in Paris, it’s about an emotionally traumatized flight attendant (A Teacher‘s Lindsay Burdge), reeling from a fiance’s suicide, who has a one-night stand with a moustachioed French guy (Damien Bonnard). She falls obsessively, and from this a Polanski-like “European-flavored psychodrama” results. But look at Bonnard. He’s almost Quasimodo. Who obsesses over homely guys? Guys who would be lucky to have sex with someone like Burdge in the real world? What kind of flight attendant goes nuts over a guy who looks like a peripheral drug dealer from John Frankenheimer‘s The French Connection II? I’m sorry but this movie lost me at Bonnard.

The Rotten Tomatoes and Metacritic communities are more or less claiming that The Circle stinks. (The Rotten/Meta average is around 30%.) I’ve been following director James Ponsoldt through thick and thin, and I didn’t even get invited to see this thing. This has become increasingly common. Publicists will wave me into screenings if I write and politely ask, but when it comes to stinkers some aren’t exactly reaching out.

The final line from Glenn Kenny’s N.Y. Times review: “The movie is dedicated to Bill Paxton, who died in February and is quite fine in the small role of [Emma Watson]’s father, who’s dealing with multiple sclerosis. The dedication is a kind and considerate touch. Still, if you’d like to enjoy a movie featuring both Mr. Paxton and [Tom] Hanks, I’d recommend Apollo 13.”

Nobody invited me to see Ken Marino‘s How To Be A Latin Lover either. The general view is that it doesn’t suck as badly as The Circle — a 40% Rotten Tomato and 52% Metacritic rating. I could’ve made the effort, but it’s obviously a Latino Adam Sandler film. The trailers have made that clear.

Honestly? The most interesting newbie is April Mullen and Stephanie Fabrizi‘s Below Her Mouth. (Great title!) From 4.27 NBCnews.com review by Trish Bendix: “Below Her Mouth is essentially a fantasy…a fairy tale for a subgroup of people who rarely to get to see the kinds of things that they dream played out on screen…a romance-fueled intimacy and passion that is too often relegated to a scene directed by a man and played by two straight women.”