Support on Patreon Follow @wellshwood
17 Comments
Redoubtable Is A Bust

The output of legendary nouvelle vague director Jean-Luc Godard was the epitome of cool between 1960 and ’67, during which time he made Breathless, Le Petit Soldat, Vivre sa vie, Les Carabiniers, Contempt, Band of Outsiders, Masculin Feminin, La Chinoise and the legendary Weekend. But then came Godard’s militant Marxist period (’68 to late ’70s), during which he denounced his heyday flicks as bourgeois trash and devoted himself to revolutionary cinema. But when the familiar references to Hollywood genres and conventions began to fade from his films and as Godard became more focused on Maoist dogma and such, people stopped giving a shit.

So is Michael Hazanavicius‘ Redoubtable, a new Godard biopic, about the sexy cool period or the hardhead Marxist period? You have to ask? Of course it’s about the latter, and boy, does it embrace Godard’s bitter sniping and pissed-off, ultra-didactic radicalism! It really bores into that, and so the movie becomes as much of a drag to 2017 audiences as Godard himself became a drag to his once-loyal fans starting in ’68.

I just watched this Hazanavicius film earlier this evening so I should know. Redoubtable isn’t oppressively awful but it does make you feel profoundly irked at Godard (Louis Garrel) and his hammerhead bickering and general aversion to anything remotely soothing or pleasurable.

In the lead-up to the Cannes Film Festival debut of Redoubtable, the idea began to sink in that it’s about a mid ’60s love affair between director Godard and actress-author Anne Wiazemsky (Stacy Martin). Well, it is that to some extent, but mostly it’s about how Godard’s frowning, screwed-down, butt-plugged revolutionary mentality began to decrease or suffocate whatever regard he might’ve once had for even a semblance of joie de vivre, and thereby destroyed his relationship with Wiazemsky.

Now this is a choice spot from which to capture the hustle and bustle of the Cannes Film Festival. This was taken roughly an hour ago (12:45 pm) on the outer balcony on an 8th floor suite at 7 La Croisette, rented by Loveless producer Alexander Rodnyansky for interviews and whatever else. I was there to interview Alexander, who knows the international movie realm as well as anyone and possibly better than most, along with Loveless director-writer Andrey Zvagintsev. I have the audio uploaded and all, but I’ll run the piece later tonight or tomorrow morning. 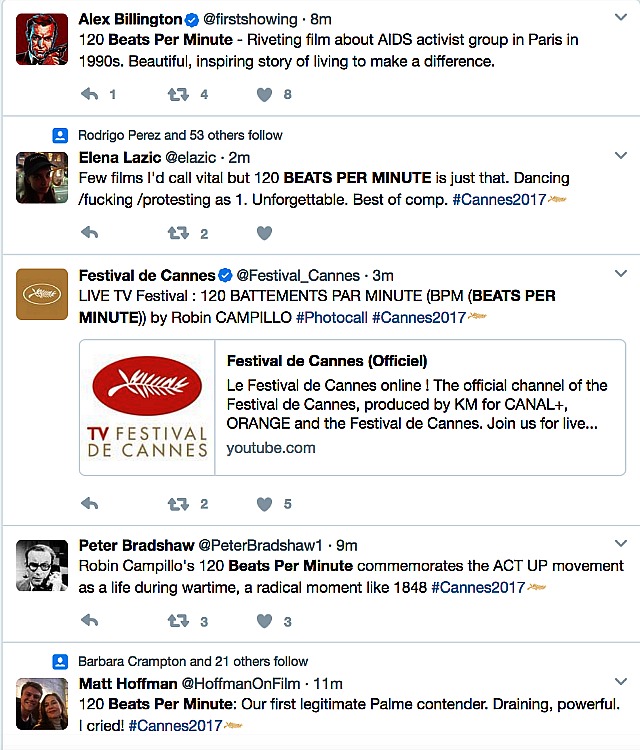 17 Comments
“If He Took A Dump On His Desk, You Would Defend It”

Don’t apologize, Anderson — own it. Your inner Bill Maher came out. Be proud.

The opening of Lina Wertmuller‘s Seven Beauties (’76) is an “oh, yeah” classic, but many have forgotten that it’s not really a main-title sequence. The title is announced but otherwise it’s just a mission-statement thing, a declaration that the film won’t be playing it straight, that satire will be used, etc. What other films have begun with impressionistic tonal mood-setters (music, montage) that seem to be main-title sequences but aren’t?

Those mp3s from Loveless co-composer Evgueni Galperine arrived early Friday evening. Track #1 provides an idea of the portion that was inspired by the sound of spinning bicycle tires. Track #2 (“Trevoga”) and track #3 (snowstorm). 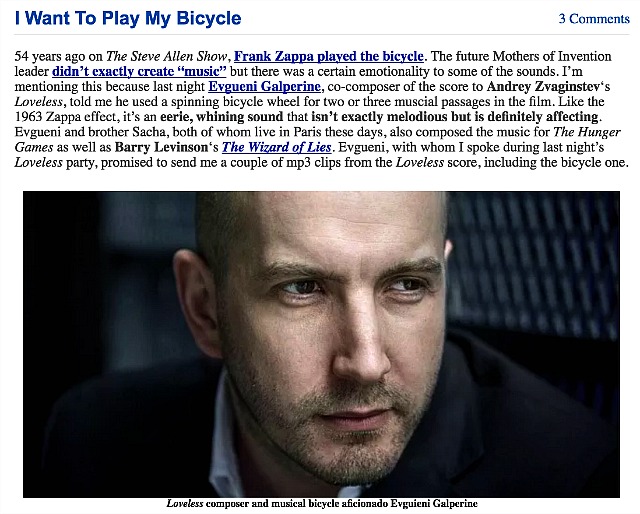