A24 has funded a Chinatown storefront that’s about promoting David Lowery‘s A Ghost Story, which opens today. The idea is to immerse yourself in the mythology of the film by wearing an actual ghost sheet (which can also be ordered online) while meditating about eternity and whatnot. I think about the void all the time. Well, actually I don’t. I know I’m going to die and become a ghost some day, but I’m happier being in the present and sniffing aromas and thinking about movies.

I like Kate Erbland’s 6.27 Indiewire story about the pop-up, but Steven Zeitchik’s L.A. Times story (posted this morning at 11:45 am) declines to post a link to the store’s website, and both stories refuse to simply state that it’s located at 51A Chrystie Street, between Canal and Hester. Zeitchick will only divulge that the pop-up is “in a revived post-industrial stretch of the city in lower Manhattan.” 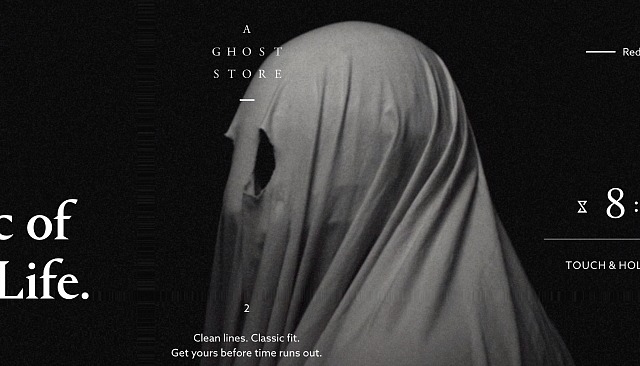 And why, may I ask, isn’t there a Los Angeles Ghost Store? The A24 guys are based in Manhattan, of course, but they seem indifferent to the feelings of their Left Coast friends. I for one think this situation sucks.

Last night I caught a 7:15 pm showing of A Ghost Story at the Arclight, and man oh man it’s so great to sit in the front row and stare at the big screen and that 1.37 aspect ratio image with the rounded corners. And I love how Casey Affleck‘s ghost garb is somewhat grayish and frayed, and looks more like a soiled paint tarp than a bedsheet. You can tell that the ghostface eye holes have been cut with drugstore scissors, and that they’re frayed. And I love how Lowery is very, very careful not to let the viewer see Affleck’s feet or footwear. God forbid should we notice tennis slip-ons or flip-flops. Affleck’s ghost doesn’t exactly float around but Lowery definitely tries to discourage viewers from mulling the possibility that the ghost gets around by putting one foot in front of the other.

As he prepared to cover G20 Summit protests in Hamburg, NBC correspondent Kier Simmons decided to wear a bright blue crash helmet, obviously for protection if the cops clubbed him or something. Real men take their chances. Can you imagine Matt Damon, Ryan Reynolds or Channing Tatum wearing one of these things if they played a TV reporter in a film? Their reputations would never recover.

MCN’s David Poland let his guard down a couple of days ago: “I am, like my father, a softie. This always feels odd coming out of my mouth (or fingers) as there seem to be so many people who want to tell me what a mean person I am. And I certainly have been mean at times. But I tend to believe that by ‘mean’ what is really being expressed is that I hit a tender spot with my words and left a mark.”

Wells comment: You can be mean with your keyboard but not with your fingers. All writers are softies of one kind or another. I’ve never found David to be especially “mean.” Judgmental, yes — he’s the only guy who’s ever dropped me as a friend. But judgment and condemnation go with the territory. I remember listening to a couple of Poland tirades about my shortcomings that were so severe that the only commensurate response, it seemed, was suicide. I decided to push on.

Back to Poland: “There was a time when I was more reckless with this skill. In those early years of The Hot Button, I just hit ‘publish’ and kept working. I was amused by my ability to cause an emotional response (good or bad) from people more powerful than I. As time passed, I came to understand — finally — that we are (mostly) all vulnerable in similar ways. [So I gradually] got out of the business of reporting on misery — jobs lost, companies failing, etc. The failures of others are not a form of amusement.

“Of course, this didn’t preclude some people and/or studios from having insanely thin skin. If you are playing in the big stadium, you have to be able to take the shots you have coming. The same is true of journalists. Much of the anger held towards me comes from headlines in the early days of Movie City News. I could be brutally direct. And 17 years later, it still comes up. But the age of Finke-ian entertainment journalism and the support of it by non-journalists like Jay Penske has led to an era of all-suck-up or all-rage coverage. [In this regard] I am a tweener. I believe in people. I believe in forgiveness. I believe in the inherent kindness of which we are all capable.”

With almost everyone having seen Matt Reeves‘ War For The Planet of the Apes, early peeks at the other two high-prestige flicks of the ’17 summer — Kathryn Bigelow‘s Detroit (Annaurna, 8.4) and Chris Nolan‘s Dunkirk (Warner Bros., 7.21) — are happening this week.

Dunkirk is being screened tomorrow for junketeers with a press conference of some kind happening on Sunday. The blogaroos have been begging to be let into Saturday’s showing but Warner Bros. is saying not now, hang in there, etc.

A guy who attended last night’s Manhattan screening of Detroit had positive reactions. He says it’s basically aimed at black audiences (the early August opening is about The Help and Straight Outta Compton having opened on 8.10.11 and 8.14.15 and earned $216 and $201 million, respectively) as well as action connoisseurs, review-reading elites, X-factor types.

He called it a tense and sobering history lesson, teeming with obvious echoes of present-day police brutality and unwarranted violence toward black guys. A strong, complex, grim and riveting visit to urban America of 50 years ago. The cops are mostly one-note villains, he says, but how could they not be given the history of the ’67 Detroit riots? Not much room for anything but condemnation.

The stand-out among Detroit‘s mostly-black cast, he says, is Algee Smith. I’ve heard from another source that Will Poulter gives the best white-cop performance. As expected, Barry Ackroyd‘s cinematography and William Goldenberg‘s editing are ace-level. Certain elite critics have apparently been given a looksee, but the blogaroos have all been told they can see Detroit sometime “soon.”