From today’s N.Y. Times story by Matt Apuzzo, Jo Becler, Adam Goldman and Maggie Haberman: “Before arranging a meeting with a Kremlin-connected Russian lawyer he believed would offer him compromising information about Hillary Clinton, Donald Trump Jr. was informed in an email that the material was part of a Russian government effort to aid his father’s candidacy, according to three people with knowledge of the email.

“The email to the younger Mr. Trump was sent by Rob Goldstone, a publicist and former British tabloid reporter who helped broker the June 2016 meeting. In a statement on Sunday, Mr. Trump acknowledged that he was interested in receiving damaging information about Mrs. Clinton, but gave no indication that he thought the lawyer might have been a Kremlin proxy.”

Obviously things look bad for Team Trump right now, but what if you, a senior guy with the Clinton campaign, had been told a year ago that a possibly dicey Russian source was ready to provide a video file containing what would later become known as the pee-pee tape? Would you want to at least meet with the guy, or would you say “no, this is unethical and slimey and I won’t do this, even if the tape turns out to be real, which it might very well be”?

Business Insider‘s Jason Guerrasio and Michael’s Telluride Blog have recently indulged in some Telluride ’17 speculation, so I might as well offer my own two cents worth of hot air. Which is not to suggest that HE’s wish picks are total bullshit. I’ve heard some things and have good insect antennae, so what I’m guessing or suggesting has at least some relation to reality.

Hollywood Elsewhere is hearing for sure that Todd Haynes‘ problematic Wonderstruck is a lock; ditto Sean Baker‘s The Florida Project and Sebastian Lelio‘s A Fantastic Woman, which popped at last February’s Berlinale.

I’m strongly hunching that Battle of the Sexes, Call Me By Your Name and Andrey Zvagintsev‘s Loveless (the last two being distribbed by Sony Pictures Classics, a longtime Telluride presence) are more or less locked, and I’d love to see mother! play there also, of course.

These films playing at Telluride would make basic sense in terms of generating buzz and marketing prowess, although I haven’t asked what’s actually going on. I’m figuring it can’t hurt to run a few flags up the pole and see who salutes. No harm in a little spitballing.

Chris Nolan‘s Dunkirk has passed the first critics-screening test with flying colors. The comments to keep in mind are (a) “Never seen anything like it,” (b) “Almost a silent film,” (b) “A VERY different Nolan film” and (d) “may be divisive.” I’m interpreting the last remark to mean that discerning types may like it more than the popcorn-munchers. Great if true! 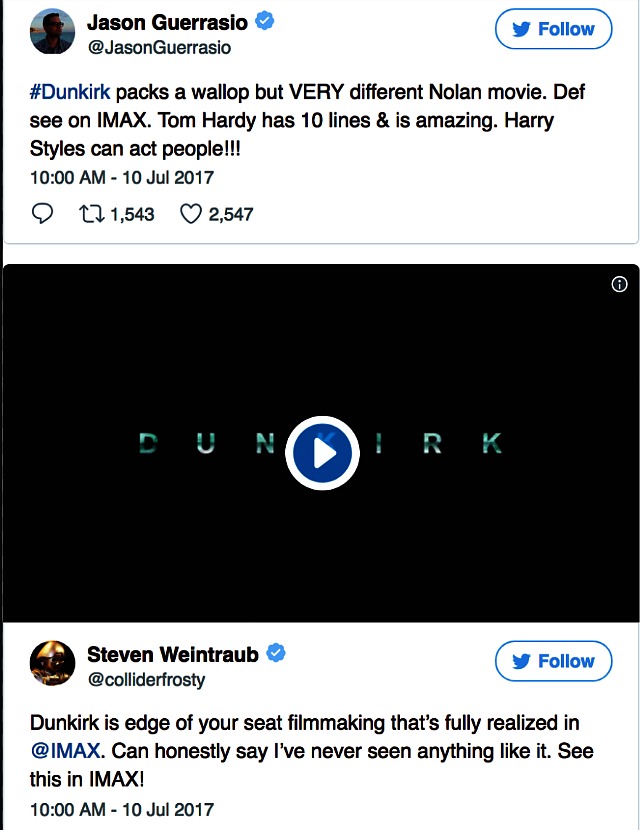 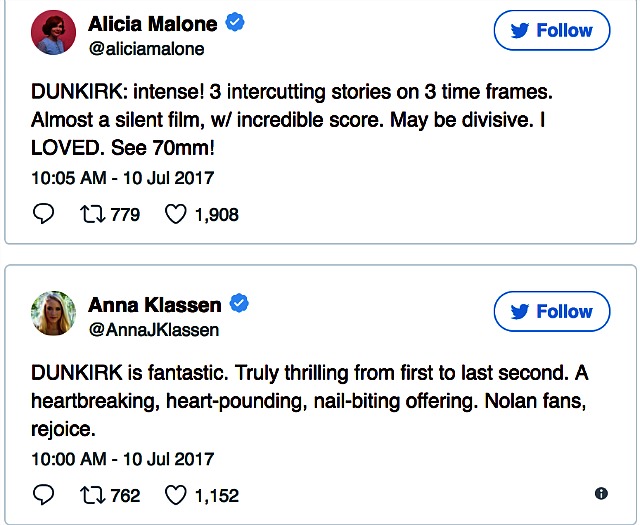