31 Comments
The Girl From Lonesome Holler 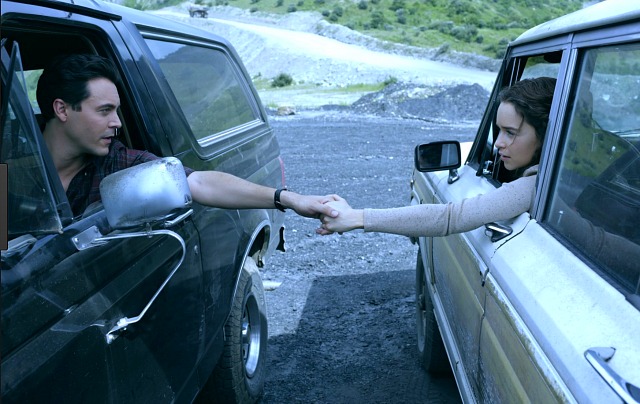 Over the just-finished weekend Tatyana and I stayed with Santa Barbara Film Festival honcho Roger Durling and his partner, Dan. They live in an elegant, Spanish-styled, single-story home (brick adobe exterior, stressed clay roof tiles) in a gated Goleta community. On Sunday Dan’s son Alex dropped by and we all went for brunch at the Bacara Resort & Spa, about a mile to the west. During that meal and for the rest of the day we were a fucking gang of five — a posse.

We ate like a posse. We travelled in the same car like a posse. We went to a local Best Buy so I could buy a computer charger, and we all strolled around like the Jets from West Side Story. We walked down to the beach like a posse. We watched Game of Thrones like a posse. At 7 pm we went back to the Bacara for dinner and chowed down like a posse — chuckling, joking, half-owning the room. When one of the Bacara staffers came up to say hello, Roger gestured in our direction and explained to the guy in a soft-spoken, put-on way, “This is my posse.”

I hadn’t hung with a posse since 11th grade. For years I’ve been putting down posses (my animus started with Leonardo DiCaprio‘s pussy posse in the late ’90s) for what seemed like a kind of arrogant, entitled swagger. My mantra had been “be a man and walk alone or with your girlfriend…only immature schmucks walk around in a wolf pack of five or six.” Now I feel differently. It’s nice to hang with a posse. It makes you feel safe and secure and relaxed. They’ve got your back and you’ve got theirs.

Only now can it be told, six days later: I was watching TV last week when I decided to hit the kitchen in a hurry. I was in a slumping, nearly horizontal position on the big blue couch with my legs on the ottoman, so I bolted upright and began my journey. But the material covering the ottoman had been pushed off by Tatyana the night before, and somehow or other the material caught my right foot as I took my first stride. Right away my balance was gone as I began to stagger forward. Before I knew it I was completely off-balance and hurtling toward the dining-room table like George Foreman after that final punch from Muhammud Ali in Zaire. I landed on the right side of the table, causing it to tip over and with it all kinds of stuff — two laptops, a lamp, a coffee cup (shattered), charging wires, pen holders, a mouse pad, a bottle of computer-screen solvent, envelopes. After the table tipped I went with it, of course, and wound up on the floor. No wounds, no bruises, no dents. But Tatyana was watching with fascination and I felt a bit embarassed. Until the moment of impact I hadn’t caused that much domestic wreckage in my entire life.

46 Comments
Should’ve Riffed On This Earlier

My bad for not highlighting this Snowman trailer last week or whenever the fuck it surfaced. You can tell this chilly British crime thriller is a standout, in part because you know director Tomas Alfredson (Let The Right One In, Tinker Tailor Solder Spy) has his shit together. Michael Fassbender, Rebecca Ferguson, Charlotte Gainsbourg, Val Kilmer, J. K. Simmons, Toby Jones, Chloë Sevigny. The Universal release opens on 10.20.17.