13 Comments
Call Me By Your Cocktail

This evening Tatyana and I attended a Hollywood hills party for Roger Durling‘s Santa Barbara Film Festival. It was held at a beautiful, ultra-modern mini-manse on Oriole Way**. The owner-hostess was longtime festival supporter and former Lynda.com owner Lynda Weinman. We chatted with Florida Project and Tangerine director Sean Baker. I told him I’d missed TFP in Cannes but wanted to catch it sometime in August, if at all possible. Baker was with Florida Project associate producer and actress Samantha Quan. Many of the usual journo suspects were there — Anne Thompson, Scott Feinberg, Peter Rainer, John Horn, etc. An elegant event, startling Belvedere vodka cocktails, an exquisite infinity pool and a knock-your-socks-off view. 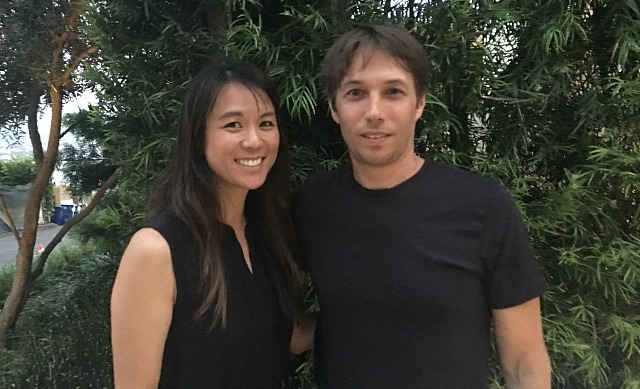 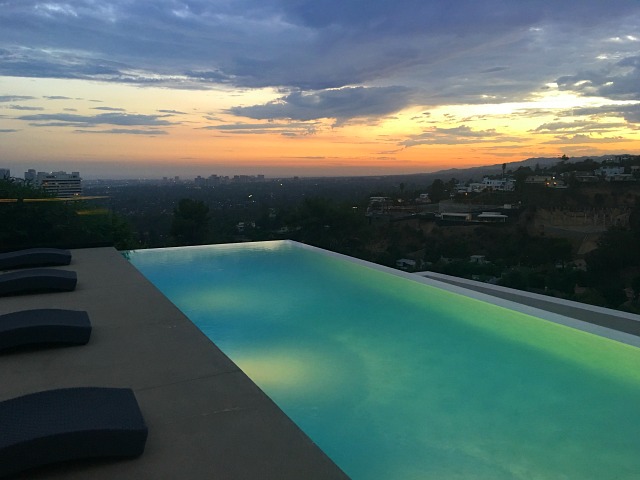 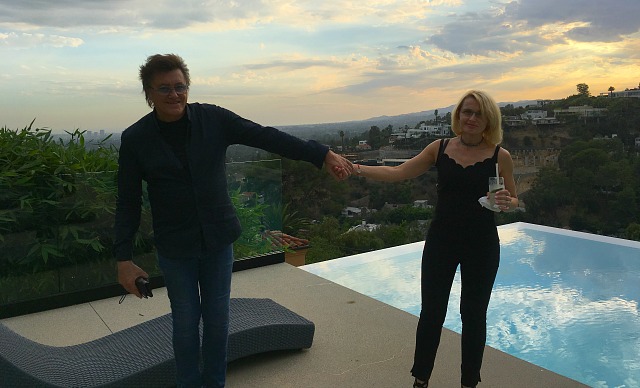 The Call Me By Your Name trailer, I mean. The poster popped three or four days ago. 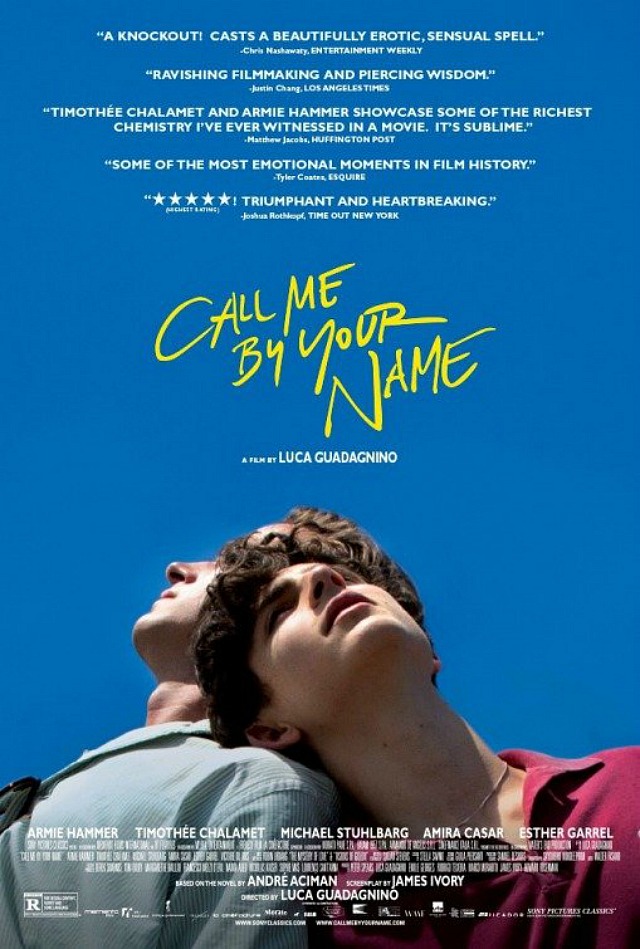 From Brent Lang’s 8.1 Variety story about Kathryn Bigelow and Mark Boal‘s Detroit, which opens on Thursday night: “What emerges in Detroit is punishing to watch. It’s a film without a moral victory. Innocent people die. Murderers go unpunished. Good men and women are left to pick up the pieces. Some are unable to move on. In a coda to the picture, Agee Smith’s character, Reed, gives up singing professionally and retreats from the world. ‘It’s a tough movie,’ admits Boal. ‘The movie is challenging to watch. We’re in a difficult spot in the world right now, [but] I’m hopeful that audiences will respond to the challenge that the movie poses and appreciate not being talked down to.'”

I was just noticing Alexandre Bustillo and Julien Maury‘s Leatherface (LionsGate, 9.21), a prequel to ’74’s The Texas Chainsaw Massacre and the eighth film in the TCM franchise. And I was saying to myself, “You know something? I don’t a flying fuck about Leatherface’s backstory…does anyone?”

I actually don’t give a flying fuck about any character’s backstory…ever. I never cared about little Bruce Wayne seeing his parents murdered or how that trauma affected him as an adult. Tough shit, sonny! I had a pretty tough childhood also — get over it. Seriously — fuck you and your aloof, melancholy Wayne Manor attitude about everything. I’m sitting here in my cushy megaplex seat with a small popcorn and a Diet Coke. Entertain me, ya fuck.

If I never see another origin story, it’ll be too soon. Fuck all origin stories from here to kingdom come. I don’t want to know anything about what any character went through before the movie started. All I want to know about any character in any film is how they’ll respond to the particular thing that’s happening right now. Nothing else matters.

You could make an origin-story movie out of any major character in cinema, and you’d be some kind of destroyer of worlds if you did.

Did we need to know what North by Northwest‘s Roger Thornhill was like as a nine-year-old kid, playing marbles or stickball or falling in love with the girl next door? In Zero Dark Thirty Kathryn Bigelow told us nothing about the early formative years of Jessica Chastain‘s Maya, and that was totally fine with me. I didn’t give a damn about the evil father of Heath Ledger‘s Joker taunting him as a kid. I’ll never want to know about how Alan Ladd‘s Shane came to be an ace-level gunfighter, or how Clark Gable‘s Rhett Butler became a charming rogue. I’ve always hated, hated, hated depictions of young heroes in any context or franchise. Those movies are always awful. The only young anything I’ve ever liked was Young Frankenstein.

The only realm in which backstories are regarded as a big deal is that of (a) superheroes and (b) hit-movie sequels. You really do need to be a bit of a simpleton to be genuinely interested in backstories in the first place. There are NO backstories or character fill-ins of any kind of in Chris Nolan‘s Dunkirk, and it’s utterly wonderful for that.

I got up a little late, and I’ve been caught up in two side issues.  Now I have to take Zak to Laurel Pet Hospital for his fungal sores, and then pick up some medication, hit the bank and then re-Fed Ex some immigration forms (which were sent back because of single error) and yaddah yaddah. Back on the HE stick sometime around 2:30 or 3 pm. Way it goes on occasion. Tonight is a special Hollywood hills party for Roger Durling‘s Santa Barbara Film Festival, which will mean missing a 7 pm screening of Steven Soderbergh‘s Logan Lucky. (Which I can see next week.)

On the occasion of the first full-boat trailer for David Fincher‘s Mindhunter, a ten-episode Netflix series that will debut on 10.13, here’s a riff I posted five months ago: The first two episodes were directed by David Fincher; the series is produced by Fincher, Charlize Theron, Josh Donen and Cean Chaffin. Like Zodiac, Mindhunter is set in the ’70s. Okay, 1979. It’s about a pair of FBI agents (Jonathan Groff, Holt McCallany) interviewing imprisoned serial killers to try to solve ongoing cases. Which of course is precisely what Manhunter‘s Will Graham (William Petersen) and Silence of the Lamb‘s Clarice Starling (Jodie Foster) did — i.e., interview Hannibal Lecter in an attempt to capture, respectively, the Tooth Fairy and Buffalo Bill. Written by showrunner Joe Penhall (The Road).