Whatever this is, I’m not getting it. All I’m feeling is a kind of trippy, neo-psychedelic vibe. Director Darren Aronofsky understands that kind of current, of course. Remember The Fountain? 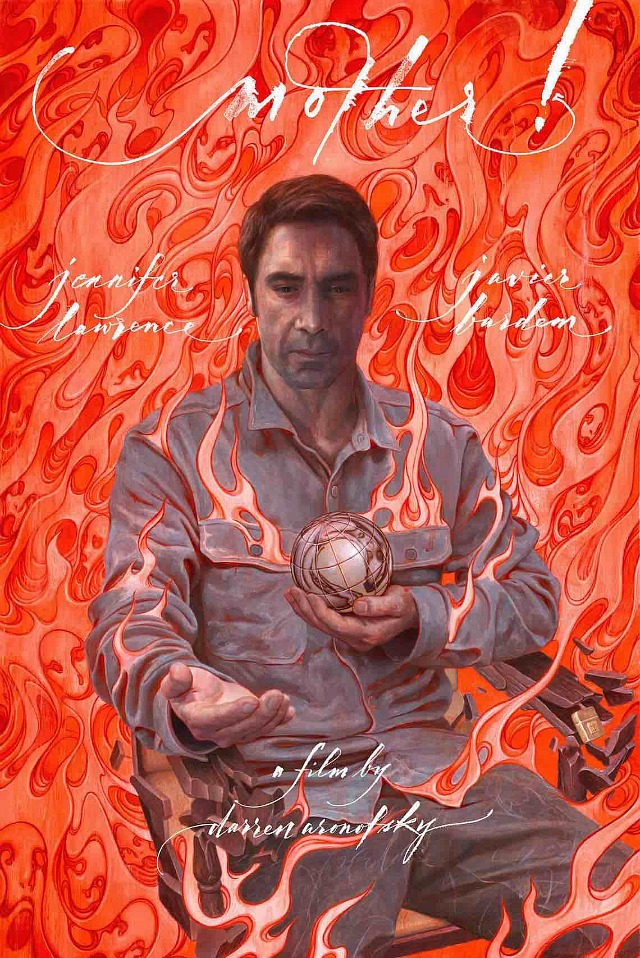 In what sounds like a gesture of industry-wise, tender-hearted compassion, Variety‘s Owen Gleiberman is claiming that the allegedly trouble-plagued The Dark Tower “is no shambles. It aims low and hits (sort of)…it’s a highly competent and watchable paranoid metaphysical video game that doesn’t overstay its welcome, includes some luridly entertaining visual effects, and — it has to be said — summons an emotional impact of close to zero. Which in a film like this one isn’t necessarily a disadvantage.

“With any luck, The Dark Tower could prove a solid box-office performer over the weekend, yet the picture’s no-frills design raises an interesting question: Would it have been more commercial had been an ambitious, two-hour-plus sprawl of a movie that attempted to be more digressively true to the weight of King’s novels? My instinct says no. The Dark Tower works as a movie because it’s not trying to be multiverse — and because, in its light derivative ballistic way, it packs in just enough of the King vision to remind you that everything old can be new again, especially if it wasn’t all that novel the first time.”

On 1.17.14 Deadline‘s Mike Fleming reported the skinny about why Oliver Stone‘s Martin Luther King biopic as well as Paul Greengrass‘s Memphis project had run into a wall. The bottom line was that the MLK estate didn’t want the assassinated civil rights leader’s extramarital adventures (allegedly with white women) to be part of the narratives. And yet at the end of 2014 Ava Duvernay‘s Selma put MLK’s extramarital episodes right on the table and nobody said boo. Yesterday Fleming reported that financing is secure on Scott Cooper‘s Hellhound On His Trail, an adaptation of Hampton Sides‘ factual account of MLK’s murder and the subsequent FBI manhunt for assassin James Earl Ray. Presumably the film will acknowledge that FBI chief J. Edgar Hoover taunted and threatened King when he was alive with tapes of his extramarital motel flings. In short, the “MLK had a randy nature” cat — the same that killed Stone and Greengrass’s MLK films — is finally out of the bag.

“I had a cancer scare, and my boss said that if I was a truly good assistant I would’ve dealt with [my] emotional baggage earlier, so I wouldn’t have cancer. She also wouldn’t let me off work to go to the doctor, and I had to sneak around in order to find out if it was cancer or not.” — Sam, talent management assistant, speaking to LAist contributor Emma Specter in 8.2 piece called “Sex Toys, Crossbows & D.I.Y. Facelifts: Hollywood Assistants Spill Their Wildest War Stories.”

In other words, the cancer concern that Sam was dealing with was partly regarded as a personal imposition upon the talent manager and a general drain on the effectiveness and profitability of her operation. The truth is that Sam needed to get his shit together before the cancer scare manifested. If he’d done so he would have been a better assistant, and would’ve been more appreciated.

Translation: “Do you ever think about anyone or anything else besides your cancer scare? Yes, cancer is a drag, we get it, of course. But cancer is not just a threat to your health but also to your boss, her business and your co-workers. Did you really need to get cancer, Sam? Couldn’t you have lived a more healthy life before it was detected? Can we be honest? You may be disappointed by the prospect of an early death, Sam, but we’re disappointed in you.”

Down at the Metrograph, the Safdie brothers are attempting to elevate their reputation and particularly that of Good Time, their latest film, by creating an association with several respected crime and urban adventure films — Heat, Thief, Miami Blues, Jackie Brown, The Running Man, 48 HRS., Jackson County Jail, Short Eyes, et. al. “Movie crime, real crime, heroes, zeroes, the naked, the dead and the termites eating away at your Lazy Boy’s legs,” the Safdie copy reads. “Here’s a bunch of movies that kept us hot and bothered all through the conception and realization of our newest feature.” 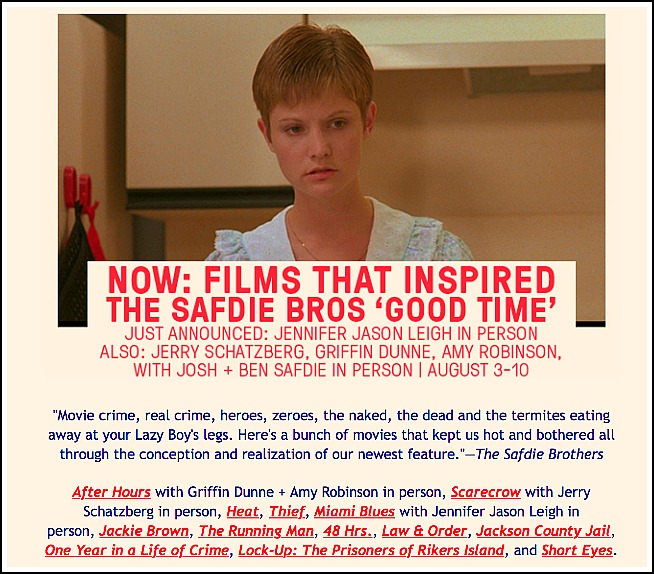 Don’t even go there, guys. It’s illegitimate — certainly a reach — to try and position yourselves in the same realm as Michael Mann, George Armitage, Walter Hill, Robert Young, et. al. Good Time (A24, 8.11) has good street energy but it lacks in so many other departments it’s not even funny. The Rotten Tomatoes critics who helped give Good Time a 94% rating were mainly jerking themselves off, trust me. Don’t go into the Safdies!

From “Dear Cops — Please Capture or Shoot These Assholes,” posted on 5.26.27: “The Safdie brothers know how to whip action into a lather and keep the kettle boiling, but I can’t abide stupidity, and after 40 minutes of watching these simpletons hold up a bank and run around and ruthlessly use people to duck the heat I was praying that at least one of them would get shot or arrested. I can roll with scumbags and sociopaths (like Robert De Niro‘s Johnny Boy in Mean Streets), but I need a little something I can relate to or identify with. If the repulsion factor is too strong, I check out. And that’s what I did in this instance. And good riddance.”

62 Comments
Could Temple of Doom Even Be Made Today?

If Steven Spielberg‘s Indiana Jones and the Temple of Doom were released today, would the SJW twitter banshees create an even bigger stink about its racist, looking-down-its-nose depiction of Indian natives and Hinduism (or more precisely ‘thuggees“, who were more or less the anti-colonialist ISIS figures of Rudyard Kipling‘s era)? Or would everyone just shrug this depiction off as a winking homage to the thuggees in George Stevens‘ Gunga Din? Odds favoring scenario #1: 85%. Odds favoring scenario #2: 5%. Hate to admit this: Temple of Doom is empty and exhausting, but on a shot-to-shot, scene-to-scene basis it’s brilliantly shot, performed, choreographed and edited.

No one is rooting harder than myself for Steven Soderbergh‘s Logan Lucky (Bleecker Street, 8.18) to become a hit. If this happens Soderbergh’s studio-averse financing, marketing and distribution scheme, which he explained to the N.Y. Times two or three days ago, will rewrite the indie game.

It Logan Lucky connects the Soderbergh scheme (basically the old ploy of raising production funds by selling off foreign distrib rights plus selling post-theatrical rights to pay for marketing) will help ensure the health of smarter, sharper films that haven’t been dumbed down by the big studios. It will also offer an opportunity for others to follow in his wake.

But of course, Logan Lucky has to be a good film on its own two feet. Joe and Jane Popcorn have to want to see it for what it is. Movies are not about earnings and deals and maverick marketing strategies, but the ways in which they touch or tickle you deep down.

What is Logan Lucky exactly? I won’t know until tomorrow, but basically it’s Ocean’s 7-11. This, at least, is how Indiewire‘s Anne Thompson put it during last night’s Santa Barbara Film Festival party. This was also the title of a dogshit-level YouTube series that popped in ’08, but nobody remembers sub-standard stuff so let’s forget it even existed and call Soderbergh’s film the “real” Ocean’s 7-11.