As far as I can guess or discern, mother! (Paramount, 9.15) is a movie about monsters consuming a victim. I don’t know anything, but it may be some kind of pervy, bloody-lightbulb descendant of Rosemary’s Baby. JLaw is Rosemary, Javier Bardem is Guy Woodhouse, and Ed Harris and Michelle Pfeiffer are sexualized versions of Roman and Minnie Castevet. Could there be a vague relation to Edgar Allen Poe‘s “The Casque of Amontillado“?﻿ 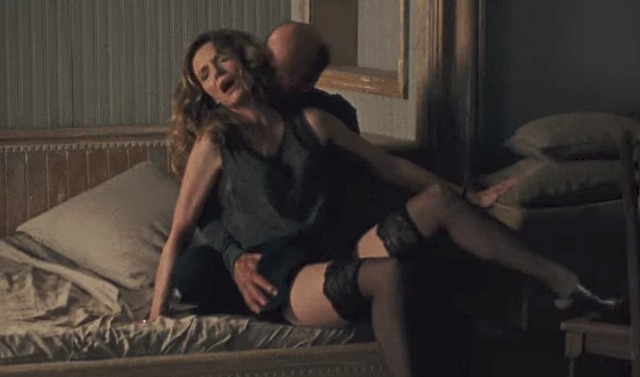 Camille Paglia‘s trangender rap, taped last April, in a nutshell: Youthful alienation has been a constant in American culture for decades. In the late ’40s and ’50s it was being a Jack Kerouac or Allen Ginsberg-styled beatnik. In the mid ’60s to early ’70s it was becoming a hippie taking psychedelic adventures or a political radical. Today you’re encouraged to think that your alienation is possibly because you don’t identify with your inherited gender, and so young people are being encouraged to surgically change genders. It’s all part of general leftist academic thinking about sexual fluidity, and it’s not only ominous but a sign of cultural collapse.

If some rightwing guy on Fox were to say this, I would dismiss it. But because I’m a longtime Paglia worshipper, I feel differently.

I lived and struggled in Manhattan (mostly in Soho and the West Village) between ’77 and ’83, and I got around, trust me. In all those years I noticed exactly one prostitute on the street — a short, pretty Latina who gestured in my direction as I was walking out of the 96th Street IRT station around midnight. The only place where I’ve ever noticed several prostitutes in the same general location was in Prague in May of ’92 — honest. And the only sexual episode that happened on the old, sleazy 42nd Street was when I was 13 or 14, when a 40ish gay guy (an old-fashioned creepy predator) tried to put the moves on me. I gave him the stink-eye. HBO will premiere The Deuce on 9.10.17.