Last Flag Flying: “Bryan Cranston, Steve Carell and Laurence Fishburne all hit acting peaks in Richard Linklater’s look at three military buddies still trying to heal psychic wounds three decades after they served together in Vietnam. The trio is forced to reunite after years apart, however, when Carell’s son dies while fighting in Iraq. It’s the mission of these middle-aged men to bring the boy home for burial. The Boyhood director’s latest is a triumph that also features stellar newcomer J. Quinton Johnson (Everybody Wants Some) as a young marine.” Wells reaction: An acting “triumph” or a general triumph all around? Too vague.

The Current War: “How will today’s audiences, with notoriously short attention spans, react to a century-old battle between Thomas Edison (Benedict Cumberbatch) and George Westinghouse (Michael Shannon) over whose electrical system was better? For those who think AC/DC is just an Australian rock band, this period piece will be an education — though not a dull one. As directed by Alfonso Gomez-Rejon (Me and Earl and the Dying Girl) from a script by playwright Michael Mitnick (Sex Lives of Our Parents), this drama bursts with cinematic energy and is fueled by a plot as relevant as who’s building the next and best smartphone app. As for Cumberbatch and Shannon, they’re acting titans.” Wells reaction: Travers seems to imply that it’s strictly for 45-plus viewers due to Millenials not being the slightest bit interested.

Hollywood Elsewhere’s Porter flight arrived in Toronto around 3 pm or thereabouts. I went straight to the Airbnb at 74 Oxford Street in the Kensington district, which may be my favorite Toronto neighborhood of all time. I picked up the press pass and other materials at the Bell Lightbox around 5 pm, and then hung in the press room until the 7 pm closing. I guess I’ll grab a salad and plan the next few days. 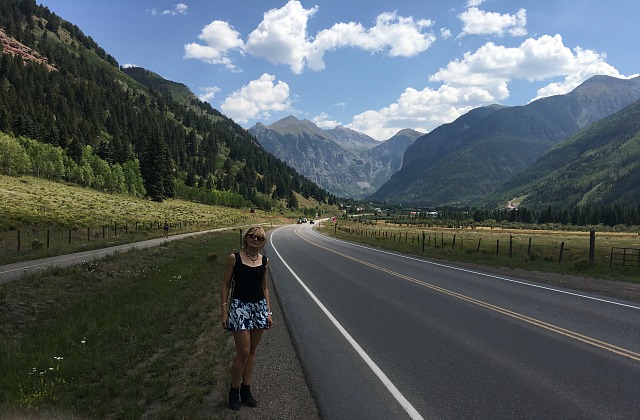 HE’s own Tatyana Antropova, taken as we left Telluride early Monday afternoon. The drive back to Albuquerque took five and a half hours. 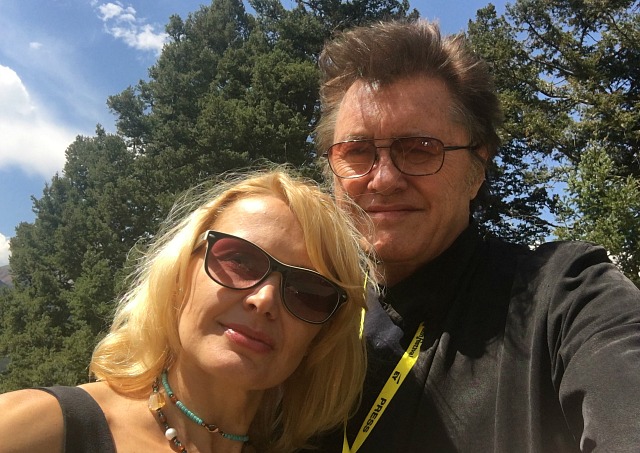 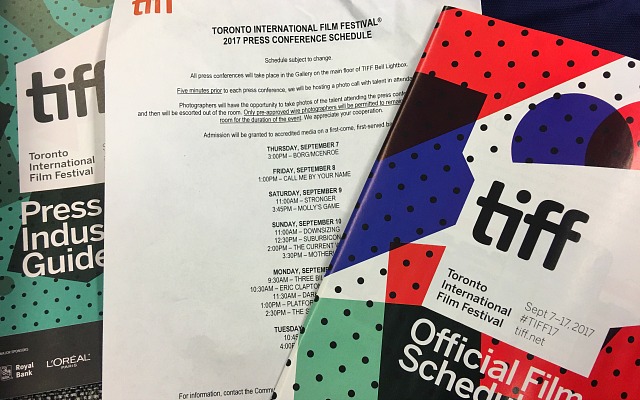 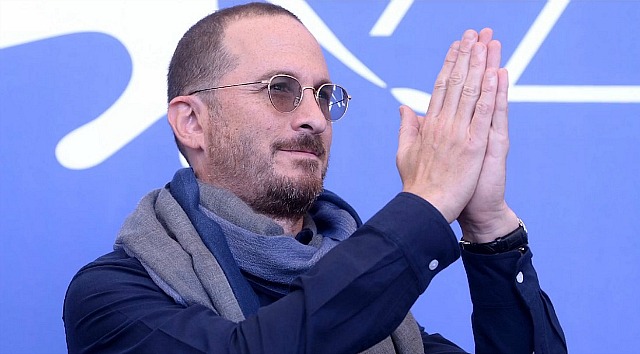 I saw IT (Warner Bros., 9.8) last night, and I’m sorry but it’s shit. Did I just say that? Would it sound less damning if I called it an IT sandwich?

What I mean is that the movie I saw at Loews Lincoln Square felt like shit to me — professionally polished but with a sensibility that felt coarse and calculating to a fare-thee-well. It’s basically a low-rent scare-a-thon for the none-too-brights… tediously familiar (small Maine town, Stephen King porridge, pre-teen pallies doing the Stand By Me thing) and strictly aimed at those who need a “holy shit!” or “oh, Jesus, that was gross!” moment every five or six minutes.

Sorry, dude, but I have aesthetic standards. IT radiates pro-level assurance from a character, dialogue and general compositional standpoint, but the spooky/scary moments (most of which involve Bill Skarsgård‘s demonic clown, i.e., “Pennywise”) are used too often, and are too in-your-face. 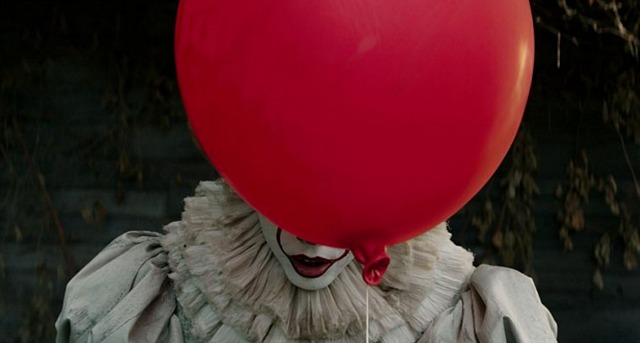 As scary flicks go I prefer subtle chills and tingles (the kind that producer Val Lewton provided in the ’40s, and which 21st Century audiences encountered in Andy Muschietti‘s Mama, Robert Eggers‘ The Witch and Jennifer Kent‘s The Babadook) rather than torrents of blood gushing out of a bathroom sink.

I recognize that most American moviegoers love the blood-torrents approach, and that mine is a minority view. Nonetheless there’s no question that (a) I have better taste in scary cinema, and (b) that most American horror fans are popcorn-munching boobs.

IT is expected to make at least $60 million this weekend and possibly earn three times that overall. This tells you a lot about the taste levels of your average American moviegoer.

I was cautiously optimistic before last night’s showing because of Muschietti’s direction. I was expecting or at least hoping that he might duplicate some of those subtle, fleeting, spine-chill moments that he and producer Guillermo del Toro brought to Mama. No such luck.

Muschietti’s thinking seems to have been “if I play it too adult and classy, the fans of Walmart-level horror films will tune out. I have to keep goosing them, over and over…one shock moment every few minutes. If the dumbshits don’t tell their friends that it’s their kind of horror film, IT will go belly-up and I may have a bit of difficulty scoring my next highly-paid gig.”

I’m presuming that Muschietti was leaned on by three IT producers with flagrantly non–Val Lewtonish instincts — Roy Lee (The Grudge, The Ring), Don Lin (Gangster Squad, Lego Movie, Lego Batman Movie) and Seth Grahame-Smith (author of Pride and Prejudice and Zombies and Abraham Lincoln, Vampire Hunter). In my mind these guys are demonic — the devil incarnate.

Arrow Academy’s Bluray of Robert Aldrich, James Poe and Clifford Odets‘ The Big Knife popped on 8.28. DVD Beaver screen-capture comparisons show that the Bluray looks much better than the 2003 DVD. The sore spot is the cropping — the Bluray uses a 1.85 cleavered image while the DVD went with a standard mid ’50s boxy format. Consider the comparison framings of a scene between Jack Palance and Shelley Winters [below]. If you think the cleavered Bluray image is preferable, there’s really something wrong with you. Obviously being able to see Palance’s hair and sideburns…either you get it or you don’t. 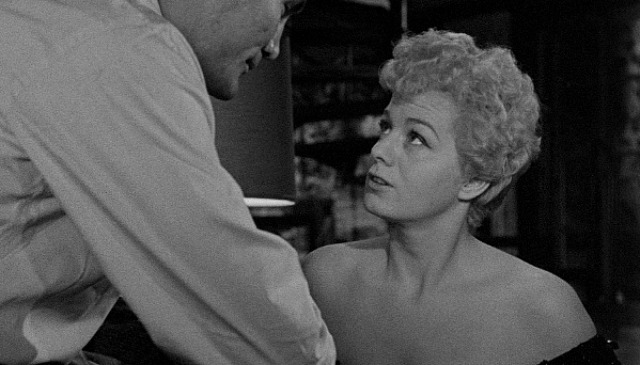 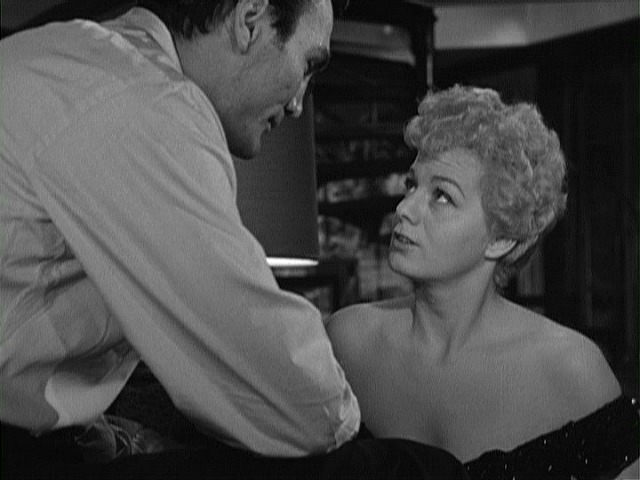 Posted on 1.2.17: Dee Rees‘ Mudbound (Netflix, 11.17), a ’40s period piece about racial relations amid cotton farmers toiling in the hardscrabble South, bears more than a few resemblances to Robert Benton‘s Places In the Heart (’84).