“I didn’t care about anyone else, and I basically found the whole thing, despite the very brainy writing, extremely fleet editing, the scrupulous attention paid to character shading plus that little sapling sticking out of the snow (a metaphor for unfair or random fate)…I found this whipsmart film demanding, not very nourishing and finally exhausting and soul-draining.”

Morning after #1:  Remember that high-velocity, rat-a-tat breakup scene beteeen Jesse Eisenberg and Rooney Mara in The Social Network, which Sorkin also wrote? Molly’s Game is like that all the way through.  You can feel yourself start to wilt.

Morning after #2:  Chastain is so arch, clipped and super-brittle (this is more or less Miss Sloane 2), you just give up after a while.  Elba has a great rhetorical sum-up scene with prosecutors near the end, but is otherwise trapped in a game of verbal ping-pong.  And the various high-rollers who populate the gambling scenes (movie stars, heirs, hedge-fund guys, Russian mobsters) inspire one emotion — loathing.  I hate guys like this, and I have to spend two hours with a whole string of them?

Morning after #3:  Yes, I felt sated and satisfied during the final judgment-and-verdict from the judge in Molly’s case, but by that time I was near death and dying for the film to end.

Back to tweet:  “I feel so worked over and emptied out by Molly’s Game that I need a neck massage, and I don’t even want to know about the after-party.”

I saw George Clooney‘s Suburbicon earlier today…wow. Fargo-ish, it’s not. But it should have resembled Joel and Ethan Coen‘s 1996 classic at least somewhat, I was telling myself, because the original Suburbicon script, written by the Coens in ’86 and set in the mid ’50s, was their first stab at a Fargo-like middle class crime noir. Nine or ten years later the Coens went back to the same James M.Cain well and created Fargo, and the rest is history.

In Suburbicon, Clooney and producer and co-screenwriter Grant Heslov have reworked things, keeping the Fargo noir stuff but also, it seems, diluting or ignoring that sardonic deadpan wit that we all associate with the Coens, and deciding to paint the whole thing with a broad, bloody brush.

When it comes to tales about greed, murder and doomed deception, there’s nothing duller than watching a series of unsympathetic, unwitting characters (including the two leads, played by Matt Damon and Julianne Moore) play their cards like boobs and then die for their trouble. There’s just no caring for any of them.

Most significantly, Clooney and Heslov have added a side-plot about how Eisenhower-era white suburbanites were racist and venal to the core, and how things really aren’t much different today.

The Suburbicon victims are the just-arrived Meyer clan (Karimah Westbrook, Leith M. Burke, Tony Espinosa), and from the moment they move into their new, ranch-style home in a same-titled fictitious hamlet (i.e., an idyllic real-estate development right out of Martin Ritt‘s No Down Payment) their cappuccino skin shade incites ugly pushback from just about everyone. But the situation doesn’t develop or progress in any way. The Meyers keep absorbing the ugly, and that’s pretty much it.

Remember how those small-town citizens greeted the arrival of Cleavon Little in Blazing Saddles? Nearly the same broad-as-fuck tone prevails here. There isn’t a single non-racist white adult in Suburbicon. With the exception of Noah Jupe‘s Danny, who’s about ten, and the Meyers clan everyone in Clooney’s film has horns, hooved feet and a tail.

Clooney and Heslov to progressive industry hipsters and Twitter banshees: “We get it…whiteys carry the demon seed…a pox upon humanity…they totally sucked in the Eisenhower era and are probably no better right now…down with the curse of Anglo Saxon gene pools except, you know, for a certain small sliver of enlightened humanity that includes Glenn Kenny, Ellen DeGeneres, Greta Gerwig, Phillip Noyce and a few thousand others.”

Suburbicon is about a married middle-management milquetoast (Damon’s Gardner Lodge), obviously a close relative of William H. Macy‘s Jerry Lundegaard, scheming with his wife’s sister (Julianne Moore plays both roles) to scam a pile of dough by hiring a couple of thugs to kidnap and “accidentally” kill his wife. All kinds of hell breaks loose when the plan goes wrong.

Everyone’s catching Suburbicon at 11 am this morning, but after that it’s anyone’s game. Albert Tello is forcing me hike down to the Intercontinental on Front Street to pick up Molly’s Game tickets (screening + after-party), but should I wedge this in between Suburbicon and Stephen Frears‘ Victoria & Abdul or post-Abdul at 3:30 or 4 pm? Yes, I’ll regret missing the 5 pm The Death of Stalin screening but tomorrow’s another day. I don’t need to see Lady Bird again so soon after Telluride, but I’d like to drop by the after-event. 90% of this racket is about politely asking and then saying “thank you.” 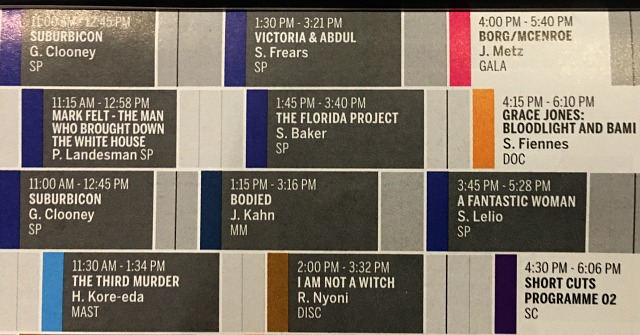 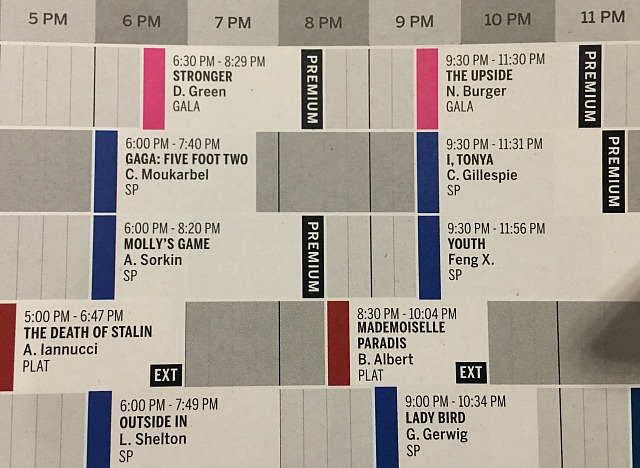