36 Comments
Only The Trumpies?

In my positive review of Joseph Kosinski‘s Only The Brave (Sony, 10.20), a firefighting drama set in Prescott, Arizona, I mentioned that the characters are all “youngish and white, Prescott being one of the whitest cities in the country….each and every character is Wonderbread.”

I mentioned that I felt “slightly bothered by the fact that these guys are probably all red-state conservatives but I got past that.” I also said that “when the big tragedy finally hits…I wouldn’t want to lie and say I didn’t feel slightly conflicted about the fact that the 19 real-life victims probably would have voted for Donald Trump had they lived, but I felt the sadness, for sure.”

All to say that Only The Brave is a red-state flick about brawny, beer-drinking men doing the hard firefighting thing, and that it’s aimed at red-state beefalos.

In any event, Brent Lang‘s Variety story about Brad Parscale, the digital media director for Donald Trump’s 2016 presidential campaign, having been hired by Only the Brave producers to help sell the film to red-state moviegoers, falls right into line.

“Black Label Media, the film’s financier, retained Parscale to supplement online and social media marketing efforts,” Lang reports. “Sony Pictures is distributing the $38 million production, which is on track to open to a weak $6 million when it debuts this weekend.”

Under different circumstances I might feel irked about a Trump campaigner trying to sell an inspirational red-state film, but the bottom line, as I said on 10.11, is that Only The Brave is better than decent.

“In movie-lore terms the Only The Brave firefighters are a team of Howard Hawks hombres, or guys who measure themselves by the same macho yardstick that Cary Grant applied in Only Angels Have Wings and which John Wayne demanded of his men in Red River. ‘How good are you?’, ‘Do you have what it takes?’, ‘Can I depend on you when the heat comes down and the going gets tough?'” etc.

A few months ago Stephen Chbosky‘s Wonder (Lionsgate, 11.17) was being sold as a delicate family drama in the vein of Peter Bogdanovich‘s Mask. Based on three relatively recent novels by R.J. Palacio, it’s about the journey of a young kid with a facial deformity (Jacob Tremblay) as he acclimates to school, and how his parents (Julia Roberts, Owen Wilson) and extended family help him along.

Five months ago (i.e., late May) a trailer popped. [See after the jump.] It suggested that the film would be partly about fear and trepidation and grade-school cruelty, and partly about love and kindness and family support. Sad to say, any half-realistic story about a facially deformed child would include depictions of cruelty at school, as kids can be absolutely heartless when it comes to judgments and dismissals of kids that are “different.”

Unfortunately, the trailer that popped today is about nothing but warm and glowing feel-good vibes. It’s all about gobs of parental love and hugs and tears of joy. It’s basically selling a film about what a wondrous and magical thing it is for a kid to be facially deformed. In short, the marketing guys seem to be panicking. 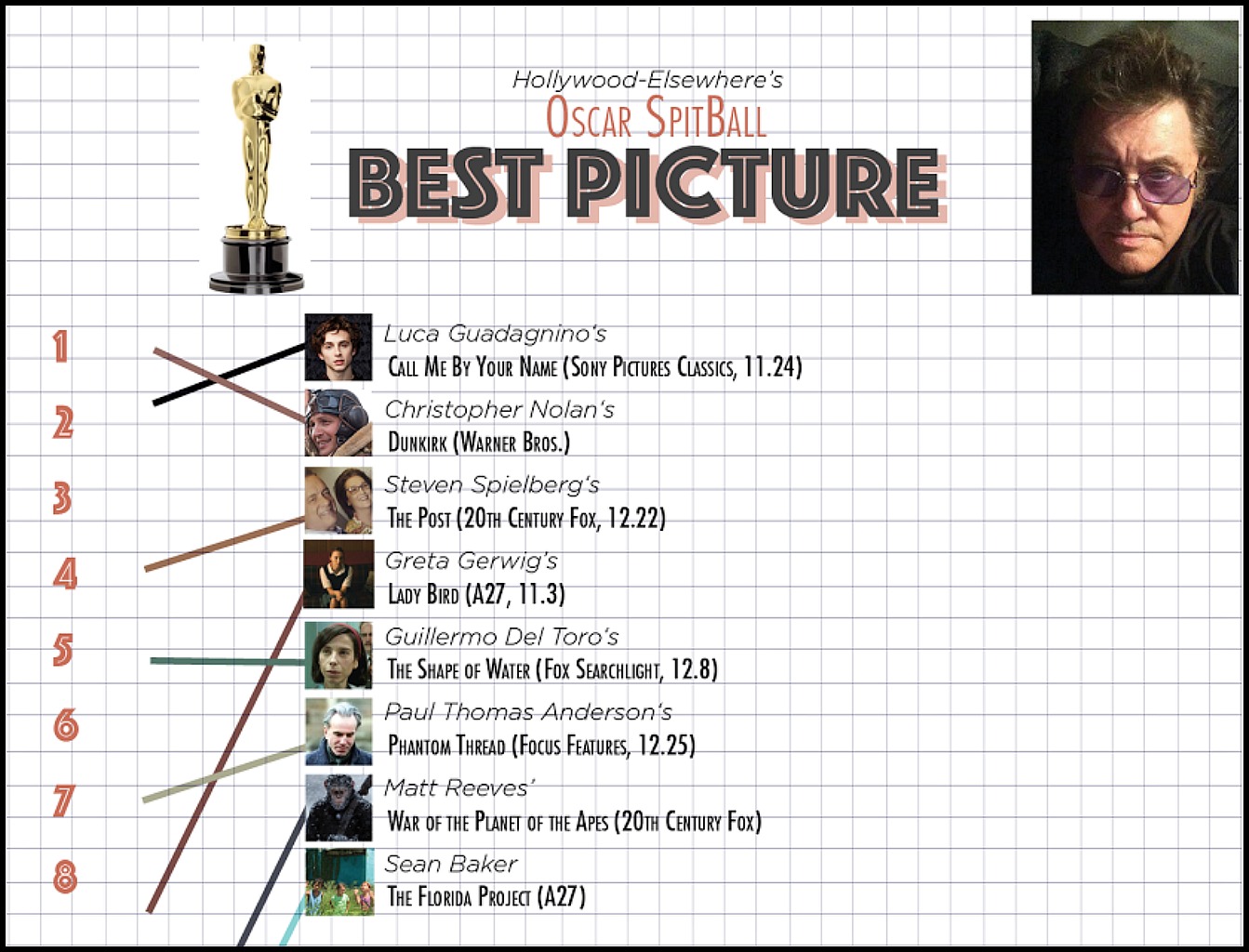 During the 2017 Toronto Film Festival the Boston Globe‘s Janice Page wrote that I, Tonya is “hilarious, sharp, snarling, pitch perfect.” Trust me, it is only one of those things — i.e., snarling. I wrote that “unless you have a strange liking for the company of losers, abusers and total dipshits, you’ll definitely want to steer clear of this cesspool exercise. It lasts 119 minutes, and it feels, trust me, like 139 or 149.”

I also called it “an exaggerated, pugilistic black farce.”

“An Ugly Stick Movie That Will Leave Welts,” posted on 9.12.17: “Abuse begets more abuse, and abused victims sometimes (often?) seek out fresh replacement abusers. And so Tonya Harding‘s bitter, chain-smoking mom, Lavona, beat and belittled her daughter from age of 7 onward, and as teenaged and then 20-something Tonya ascended in the figure-skating realm she became a ferociously angry abuser herself with a huge chip on her shoulder…what else?

“Tonya married and then separated from an abusive, moustache-wearing asshole, Jeff Gillooly, who conspired to have Harding’s skating rival Nancy Kerrigan temporarily disabled with a police-baton blow to the knee, and with many presuming, fairly or unfairly, that Harding was aware of Gillooly’s plan and was more or less down with it.

“Am I the only honest, straight-shooting journo-critic in Toronto right now? I, Tonya is cinematic abuse, pure and simple. It’s an ugly pill from hell — a violent, vulgar, relentlessly profane assembly of lower-middle-class white-trash types beating on each other and smoking and swearing and losing their tempers and causing cuts and swellings. It’s a tacky portrait of American self-loathers, brawlers, grotesques, hungry-for-famers, human garbage, etc.

I’ve only seen two episodes of Joe Penhall and David Fincher‘s Mindhunter, the ten-part Netflix series about the beginnings of the FBI’s serial crime unit, but I’m already impressed and looking forward to the remaining eight. David Fincher directed these episodes with an unhurried, even-toned hand.  Partly Son of Zodiac (set in the late ’70s) and partly I-don’t-know-what-yet, it’s a serving of methodic, step-by-step naturalism. Creepy but real. Perfectly performed by costars Jonathan Groff and Holt McCallany. Beautifully shot by Erik Messerschmidt. A striking supporting performance by Cameron Britton as serial killer Edmund Kemper. I can’t wait until they run into Richard Speck. It’s about study more than anything else, and it chills right down to the bone.

It was announced this morning that Jordan Peele‘s Get Out has scored four Gotham Award nominations — Best Feature, Best Breakthrough Director, Best Screenplay and Best actor (Daniel Kaluuya). Identity politics had nothing to do with this. Ditto the fact that Get Out has earned $175,484,140 domestically and $253 million worldwide. These four Gotham noms were entirely driven by the inescapable conclusion that Get Out is a delightfully on-target racial satire-cum-horror film as well as a heart-touching tribute to the films and careers of Larry Cohen and John Carpenter. Not to mention those brilliantly hypnotic special effects.

“…even when they’re right in front of ya?”

Posted on 9.14.17: Jim Carrey and Chris Smith‘s Jim & Andy: The Great Beyond is…what is it? Okay, it’s a 95-minute doc about Carrey’s super-intense experience in portraying put-on comic Andy Kaufman for Milos Forman‘s Man on the Moon (’99), but as a “making of” saga it’s a way-above-average thing, and as a slice of intimate celebrity portraiture it’s anything but run-of-the-mill.

The film achieves specialness by way of (a) a trove of heretofore-unseen backstage footage, shot by a crew Carrey hired to stay with him throughout filming, and (b) Carrey’s talking-head narration, which I found perceptive and (to my surprise) emotionally affecting.

I was hoping for a diverting backstage thing, but Jim & Andy is much more than that.

It’s not just an essay about the craft of movie acting and the ritual of surrendering to a role. Carrey did this so completely while playing Kaufman in ’98 that he literally stopped being himself on a 24/7 basis (refusing to answer to Jim, speaking of himself in the third person). It’s also a study of the personas that we all project socially vs. the person we really are deep down. Which makes it a food-for-thought film about what social identity really boils down to, and the games that we all submit to in order to fulfill expectations and keep up appearances.

I was never not fascinated, and I loved the flavor of it.  I was especially struck by an anecdote about a certain phone conversation Carrey had with  Man on the Moon director Milos Forman, during which Carrey floated an idea about “firing” Kaufman and the super-contemptible Tony Clifton (I was never able to tolerate this alter-ego asshole) and doing imitations instead.