I understand that Steven Spielberg‘s The Post will screen on Sunday, 11.26 at the Los Angeles WGA theatre. Presumably for WGA members, whom the below invite has gone out to. Co-screenwriters Liz Hannah and Josh Singer (i.e., Singer actually rewrote Hannah) will sit for a q & a. This presumably means everyone else will be seeing it that week — press, Academy, DGA members, other guilds. Which makes me wonder when the trailer will hit. Surely within the next week or two, no? Spielberg is still editing — what director wouldn’t be? 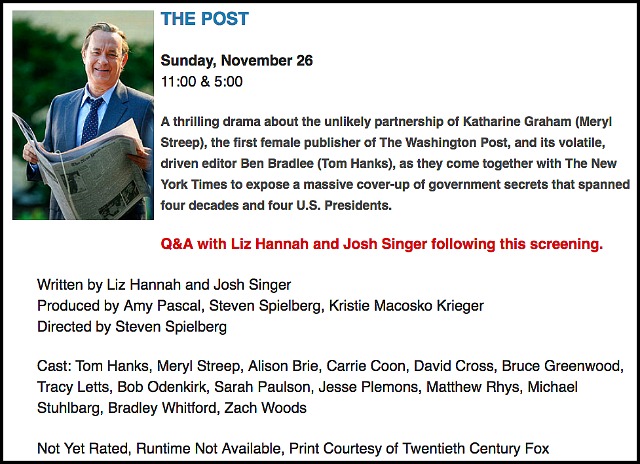 If Chuck Connors never did anything else, that look he gives the camera after firing off 12 shots from his specially modified Winchester 44-40 model 1892 would be enough. He doesn’t glare, doesn’t scowl, doesn’t smirk, doesn’t grin or suggest any kind of cockiness, and yet that look in his eyes manages to say “this is what I do, take it or leave it — I drill guys over and over, pretty much every week, and yet I’m even-tempered and respectable and so the law’s always on my side…pretty good deal, eh?” Yeah, it is. But who ever heard of a Winchester that fires 12 shots in a row? Look at it — where would 12 cartridges even fit? 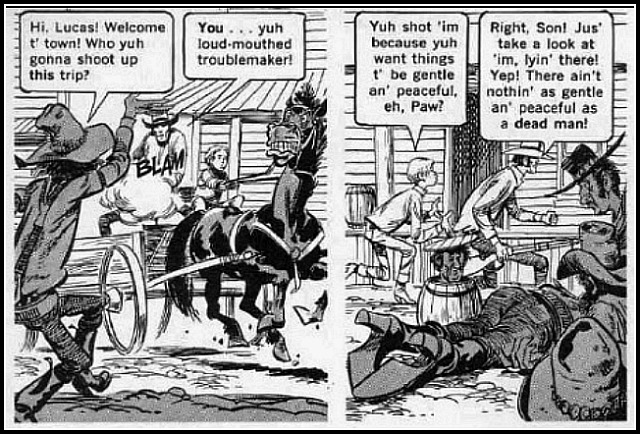 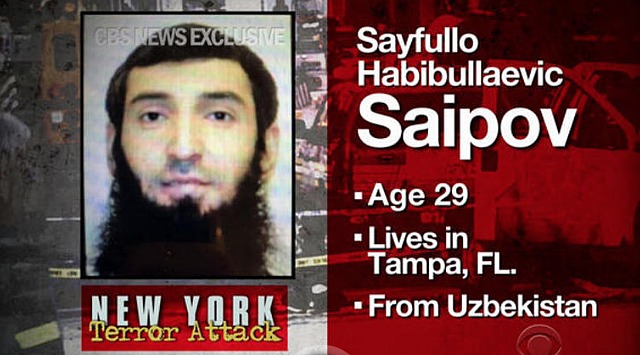 A caustic observation about Blade Runner 2049 from Michael Deeley, British-born producer of Ridley Scott’s ’82 original, appeared in a 10.30 Screen Daily interview: “I’m not looking forward to seeing it, but I will. [Blade Runner 2049] is very long. It must have been cut-able and should have been. They can’t do better [box office] because they can’t play it more than three times a day because it’s just too long, which is of course self-indulgent at the very least, arrogant probably…it’s criminal.”

Remove the epithets and Deadline‘s Anthony D’Allesandro said more or less the same thing on 10.7: “That 163-minute running time is a killer. Forget about the fact that Blade Runner 2049 has its slow moments. Once you count the trailer pre-show, how do you ask audiences to commit four hours of their time to sit in the theater?” 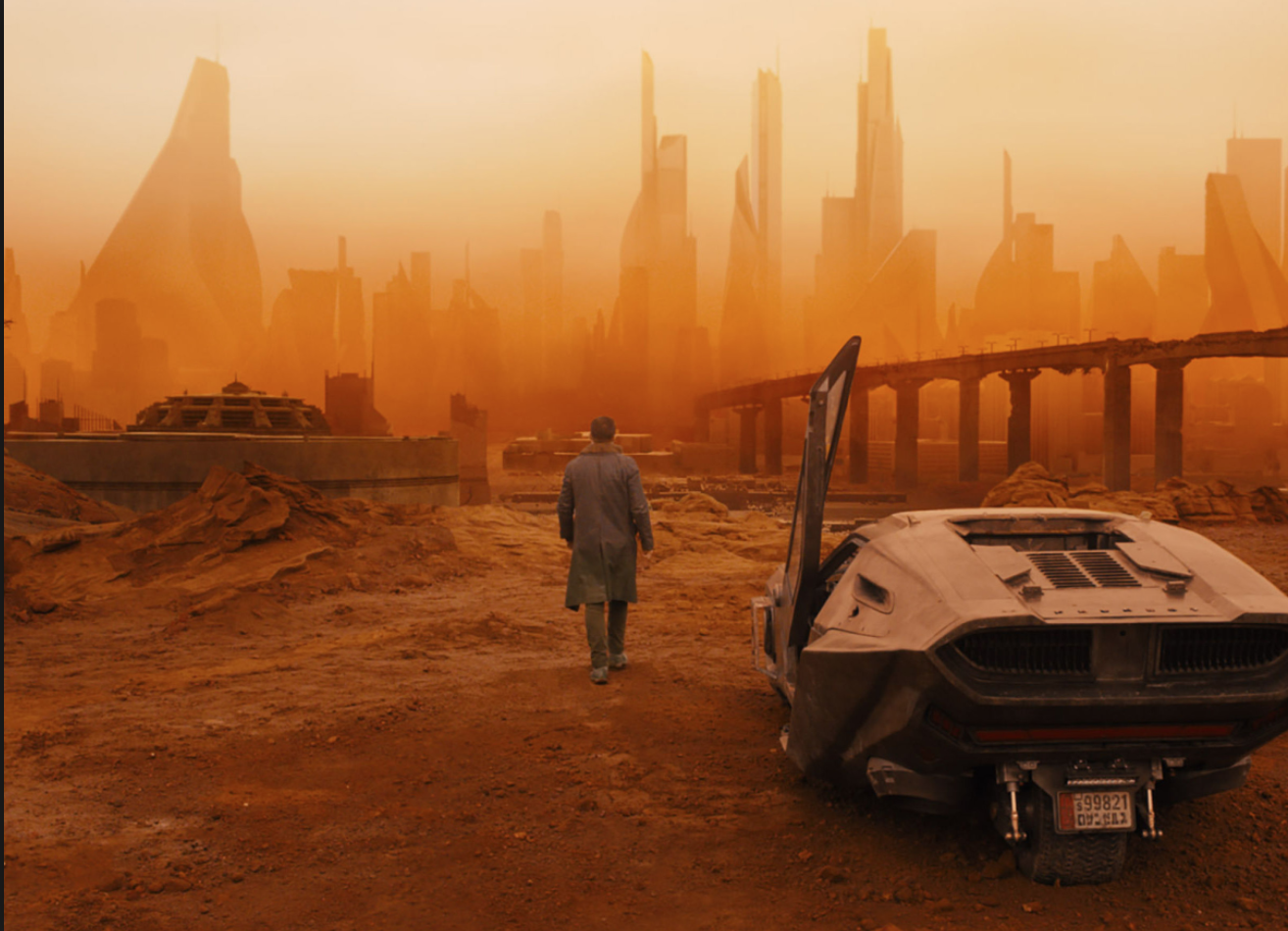 Blade Runner 2049 opened three and a half weeks ago. Has it been, in fact, a financial bust? The answer appears to be “yes.”

D’Allesandro also reported that “those affiliated with the movie have been saying that $400 million is the magic break-even number,” although that estimate was based on a lower production cost estimate of $155 million.”

But Warner Bros. is in the clear. It has no investment in the film and has simply collecting a distribution free of somewhere between 8% and 10%. Sony Pictures Releasing is distributing internationally and is also not looking at a painful downside. If there’s a loser in the equation it may be Alcon Entertainment.

Nobody rises to positions of power and responsibility in the entertainment industry without knowing what everyone else is whispering and talking about. It’s therefore inconceivable that the people who are suddenly disassociating themselves from Kevin Spacey, like the Media Rights Capital and Netflix execs who announced yesterday that the forthcoming sixth season of House of Cards would be the last, hadn’t heard stories about Spacey’s aggressive offscreen sexual pursuits for years and years, and I mean stories that have been out there since the ’90s. Everyone knew and nobody bothered because nobody wanted to go there. The stories didn’t get in the way of business and revenue, and it would have seemed homophobic and punitive to admonish Spacey for his private activities.

But the mixture of today’s “me too” climate and the Anthony Rapp allegation, itself prompted by “me too,” have suddenly made Spacey seem toxic to everyone.

I spoke last night to a couple of veterans from the 1994 shooting of The Usual Suspects, during which Spacey aggressively jumped Bryan Singer‘s teenage boyfriend (an 18- or 19-year-old kid from France) and “stole him away,” so to speak. Singer walked in on an intimate moment and the shit hit the fan. The incident happened at the very end of the shoot, but Singer was so upset he refused to work with Spacey on a few remaining pick-ups that needed to be completed. A trusted source told me last night that the Spacey-Singer story was “all over town” a day after it happened. Anyone in the film industry who claims to have never heard about this or any of the other stories over the years is either clueless or dishonest — no third option. Everyone has “known” all along so give us all a break about being suddenly “concerned,” etc.

When I was ten I avoided talky movies (what kid doesn’t?) and gravitated toward films with dynamic action, scope, spectacle. Around my mid teens I began to be interested in edgier, brainier, more complex films of whatever stripe, and my progression went on from there. Like any film maven I’ve admired the great boxing flicks (Raging Bull, The Fighter, Rocky, Champion, Million Dollar Baby) but at no period in my life was I ever into violent, pulpy, super-aggressive films about extreme martial-arts, foot-fist blood-soaked pugilism. Especially when it involved Asian combatants — fists, swords, you name it. And you can double or even triple the revulsion factor when you blend super-aggressive action with prison dramas…forget it.

The only way I’d watch Jean-Stéphane Sauvaire‘s A Prayer Before Dawn (A24, sometime in ’18) would be through the application of brute force. The usual straightjacket viewing in the fifth row with Clockwork Orange-style eyelid clamps.

From Guy Lodge’s Variety review out of Cannes: “Competition is stiff for the title of cinema’s most violently harrowing prison drama, and tougher still for the all-time most pummeling boxing movie. Gutsily, Jean-Stephane Sauvaire’s A Prayer Before Dawn comes out fighting for both. At once exhausting and astonishing, this no-holds-barred adaptation of British junkie-turned-pugilist Billy Moore’s Thai prison memoir is a big, bleeding feat of extreme cinema, given elevating human dimension by rising star Joe Cole’s ferociously physical lead performance.”

I’m not saying that all I want to watch are complex, character-driven “talking” movies, although that would make for an ironic final sentence. War movies and urban shoot-outs are fine, and I still have a soft spot for watching the best Muhammad Ali boxing matches. But when it comes to films about guys punching out other guys and causing them to bleed and bruise and stagger around…later.

Last night Seth Abramson posted a Twitter thread about ties between Popadopoulos and Sam Clovis, the walrus-like White House adviser to the United States Department of Agriculture and the national co-chair of the Trump-Pence campaign during the 2016 presidential election. The indictments state that during the campaign Clovis encouraged Papadopoulos to meet with Russian nationals in a potential effort to get dirt on Hillary Clinton, etc.

Abramson: “Clovis knows everything Trump communicated to his National Security Advisory Committee…as Trump’s liaison to his NatSec team, Clovis could testify about what information Trump took out of and put into that key committee. Clovis would know what info Trump had and how he’d processed it — for instance, when he ordered the NatSec team to change the GOP platform. Clovis would know of any info being reported from Sergey Kislyak to the NatSec team (e.g. Page and Gordon) and thereby to Trump himself.

“In essence, Clovis is almost certainly the key witness for indicting Trump. And Mike Flynn already offered to flip — whereas we don’t know Sam Clovis did or has — so Mueller would want Papadopoulos to access Clovis. The fact that Papadopoulos was cooperating and likely wearing a wire means today is the best things will ever get for Trump on Russia. That is to say, every day from here on out will be worse for Trump in terms of impeachment and removal…whether he knows it or not.”

Clovis sidenote: Every now and then a person’s name and their appearance will seem to match. Clovis looks like a “Clovis.” My first thought was that Clovis rhymes with Brumis, the name of Bobby Kennedy’s Saint Bernard from the ’60s.