35 Comments
A Comedy About Values

Jon Peters is obviously a dinosaur by the standards of today’s p.c. Twitter mob, but this is a really good tale. Frank, straight, no tip-toeing around. Yeah, I know — it’s been up since mid-August but I only just saw it today. I wish it would last an hour and that Peters would tell all the stories. I wish he’d talk more about his hairdressing days. Wasn’t he supposed to be the real-life model for Warren Beatty‘s George Roundy character in Shampoo? Sarah Silverman‘s tale is pretty great also.

I was briefly stunned to read about Ed Douglas’s suspension from the Tracking Board earlier today because this seemed to indicate, at least for a moment, that something he might’ve done years ago had caught up with him. But no — Douglas was attacked by a Twitter mob yesterday after he went on an epic non-p.c. rant about various sexual assault accusers who have come forward in recent days. The veteran critic should have thought twice before saying what he said, but this is an example of how easily you can get yourself in big trouble these days if you aren’t careful. Again — Douglas hasn’t been canned, just suspended. The situation will be evaluated tomorrow during a chat with Tracking Board honcho Jeff Sneider. “I also have a staff full of women to worry about, including a survivor of sexual assault,” Sneider explained this afternoon. “Ed is fine with the decision so case closed. We’re moving on, and he’ll be back when he’s back.”

Late last night Tatyana and I roamed among the Halloween revellers on Santa Monica Blvd. The main activities were picture-taking, mingling and greeting, drinking. No biggie, nothing different, happens every year, etc. 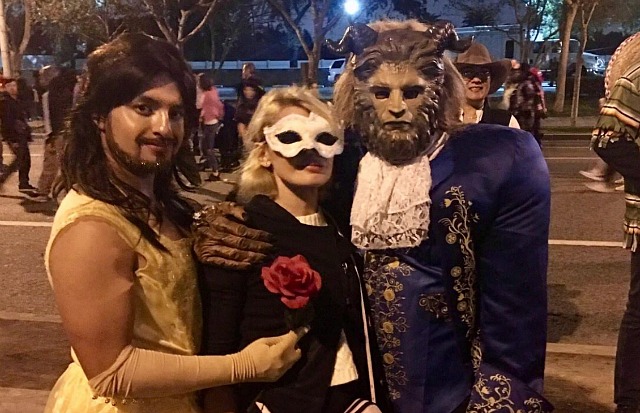 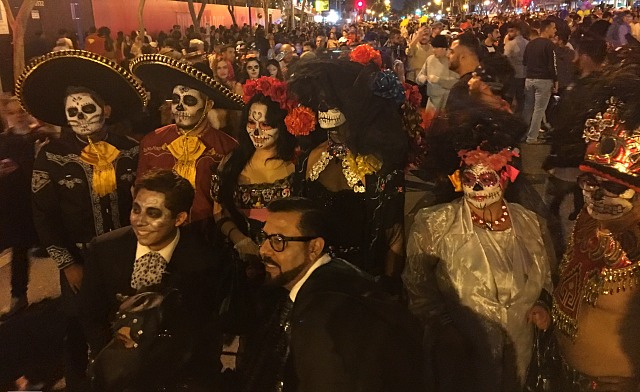 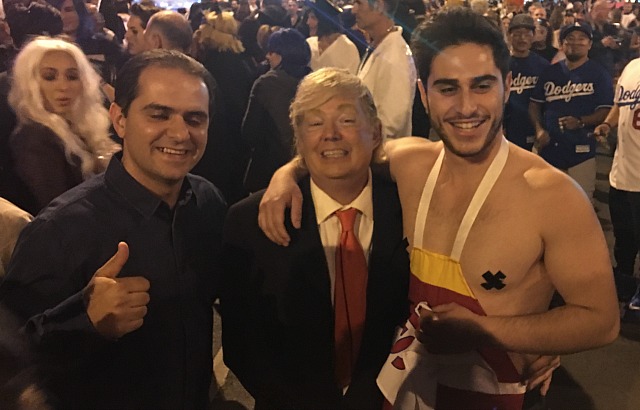 Variety‘s Gordon Cox reported earlier today that Joe Mantello will direct a 50th anniversary Broadway revival of Mart Crowley‘s The Boys in The Band. The play will run next year between April 30th and August 12th. The cast will include Matt Bomer, Zachary Quinto, Jim Parsons and Andrew Rannells. Ryan Murphy and David Stone will co-produce.

The only question is “why?” Why revive a play that the gay community began to turn its back on around the debut of William Friedkin’s film version, which opened in March 1970. That was nine months after the June 1969 Stonewall rebellion, and the sea-change in gay consciousness and values that happened in its wake — pride, solidarity, political militancy — had no room for a rather acidic drama about a group of Manhattan gays, gathered at a friend’s birthday party in the West Village, who were consumed by loneliness, misery and self-loathing.

Mart Crowley‘s revolutionary stage play, which opened off Broadway in April 1968, was a culmination of decades of frustration with straight society’s suppression and/or intolerance of gays mixed with the up-the-establishment freedoms of the late ’60s, but the William Friedkin-directed film version, which opened on 3.17.70, didn’t fit the post-Stonewall mold. And of course it hasn’t “aged well.”

When Friedkin’s film was re-released in San Francisco in January 1999, Chronicle critic Edward Guthmann wrote that “by the time Boys was released in 1970…it had already earned among gays the stain of Uncle Tomism…[it’s] a genuine period piece but one that still has the power to sting. In one sense it’s aged surprisingly little — the language and physical gestures of camp are largely the same — but in the attitudes of its characters, and their self-lacerating vision of themselves, it belongs to another time. And that’s a good thing.”

Six and a half years ago I allowed that The Boys in the Band “deserves respect as a revolutionary play of its time, and, as a film, as a kind of landmark presentation for its candid, amusing, sad and occasionally startling presentations of urban gay men and their lifestyles during those psychedelic downswirl, end-of-the-Johnnson-era, dawn-of-the Nixon-era days, made all the more entertaining and memorable by several bottled-lightning performances (particularly Cliff Gorman‘s as ‘Emory’).”

Another day, another accusation of sexual harassment against a Hollywood player. Each one serious as a heart attack. The night before last, Kevin Spacey. This morning, Brett Ratner. Dustin Hoffman was also called out today. This is just a beginning. Every voracious hound in town will eventually go down. Those who crossed the lines, I mean.

Yesterday I mentioned to a couple of friends that I have a very slight inkling of what it’s like to be invaded or preyed upon. No one ever harassed or assaulted me, but between my mid teens and early 20s I endured several episodes in which I was lightly pawed and hit on by older gay guys. All except one could be described as annoyances. I wouldn’t begin to suggest they were anything similar to what scores of women who were assaulted or harassed by Harvey Weinstein or the others have described, but they were invasive and certainly unwelcome.

One incident happened in a workplace environment. I was working as a stock boy for Caldor, a department store located in Norwalk, Connecticut, when a floor manager, a bald-headed, now-deceased guy whose last name was Rice, suggested getting some whiskey and going to a motel. Uhm, no thanks. When I was 15 and 16 I was accosted a couple of times by light-fingered predators when I would surreptitiously visit Times Square on Saturday afternoons. (Which I used to do a lot.) I was slightly irked by this but hardly traumatized. I used to hitchhike a lot around Boston, and I can’t tell you how many gay guys would pull over and make a pitch.

The one seriously creepy incident happened in New Orleans when I was 19. I had gotten blind drunk with friends on a Satuday night, and had somehow lost them. I ran into a parking lot attendant the next day who said, “Man, you were so drunk you couldn’t see.” Earlier that morning around 5 am I woke up in a hotel room bed with — yup, this happened — a much older guy in his underwear. Balding, blubbery, smelling of alcohol. The instant I realized what was happening I bounded out of bed and got dressed in a hurry, going “jeez” and “good God” and mostly feeling icky rather than assaulted. For decades I never even told friends about this. Too embarassing. Now I’m figuring “what the hell, it happened.”

Again, these experiences were minor penny-ante stuff. Thank God nobody ever got rough. But taken together in the aggregate they at least gave me an idea of what it might feel like to cope with unwanted sexual attention. No more than that.

22 Comments
See What I Mean?

There’s no point in continually re-posting my negative view of I, Tonya (A24, 12.8). I’m a minority dissenter and there’s nothing to be done about that. I would rather have my teeth drilled than sit through this film again.

Craig Gillespie‘s satirically over-the-top direction and Steven Rogers‘ bluntly-worded screenplay wore me down to a nub. The film depicts a demimonde of relentlessly crude and resentful lower-middle-class characters (all based on factual accounts) who seem to be competing for a stupidity trophy. Every line spoken by the enraged Tonya Harding (Margot Robbie), her bitter, cigarette-smoking mom (Allison Janey), her fiendish partner and ex-husband (Sebastian Stan) and a moronic, roly-poly bodyguard and friend of the family (Paul Walter Hauser) is a combination of impulsive, repulsive, ill-considered and forehead-slapping cluelessness.

Gillespie and Rogers want you to simultaneously despise and laugh at these losers, and you can certainly feel that attitude in this red-band trailer.

Most critics are big fans of I, Tonya. Agreed, Robbie and Janey will probably snag Best Actress and Best Supporting Actress Oscar noms, respectively. There’s no rooting factor or relatability in either character, of course — more like the opposite. I for one felt exhausted when I, Tonya ended. Harding’s rise and fall happened between the mid ’80s and mid ’90s, but you could process this film as a contemporary portrait of no-way-out Trump loyalists. A hipper title would be Craig’s Gillespie’s Trash.