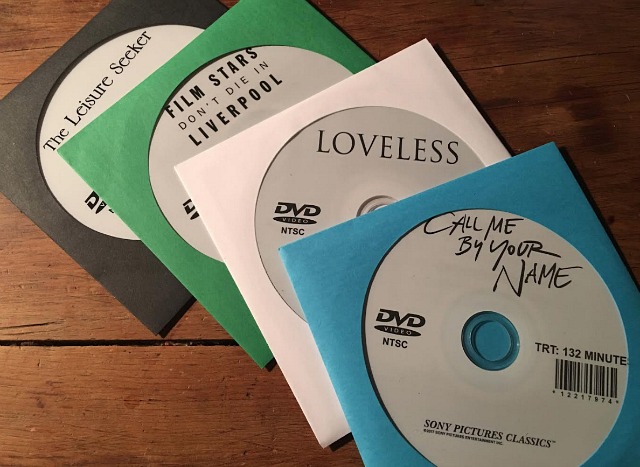 Excerpt from Camerimage tribute essay about Phillip Noyce, recipient of this year’s Life Achievement Award for directing at Cameraimage, the respected cinematography festival in Bydgoszcz, Poland: “Nowadays, film directors are quite often reduced to a black-and-white distinction between skilled craftsmen working with strictly commercial projects and artists/auteurs who change the world and make viewers think with their films. 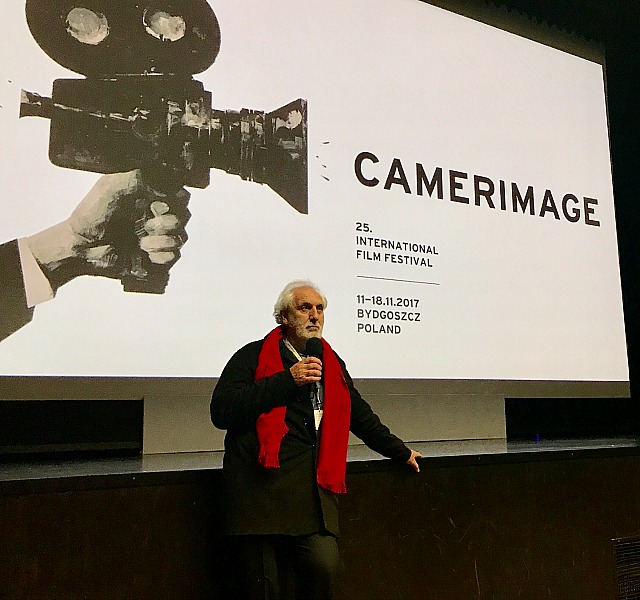 Phillip Noyce during Camerimage ceremony in which he was presented with the festival’s Life Achievement Award.

“Such a differentiation is highly unfair, of course; not only because the art of filmmaking stems from many a compromise as well as creative collaboration with cast and crew, but also due to the simple fact that each and every director is a different kind of animal, uses different means of expression, tells stories in different ways. At Camerimage Festival, we reject all kinds of pigeonholing, and we love filmmakers who have never allowed themselves to be typecast, but instead tried to explore different areas of filmmaking and engage viewers in a dialog.

“That is precisely why we are very proud to announce that this year’s recipient of Camerimage Lifetime Achievement Award for Directing will be a man who proved himself to be able to tell even the most commercial stories in a way that transforms them into striking tales about various forms of being human. A committed activist and campaigner who learned to use camera and film language to talk about social injustice and people marginalized for their differentness. A director who moves smoothly between big-budgeted Hollywood projects for mass audiences and independent, personal stories told in experimental way and breaking established conventions — Phillip Noyce.”

“When I watched Louis C.K.‘s I Love You, Daddy a second time, the jokes no longer landed; its shocks felt uglier, cruder. But for once a filmmaker seemed to be admitting to the misogyny that we know is always there and has often been denied or simply waved off, at times in the name of art. The revelations about Louis C.K. and others are killing any pretense that any of this is objective. It’s very personal, and it always has been.” — from “Louis C.K. and Hollywood’s Canon of Creeps,” an 11.12 N.Y. Times essay by Manohla Dargis.

“I respect what I think I Love You, Daddy is saying, which is that wealthy showbiz types and their liberal, laissez-faire approach to morality, relationships and especially parenting is a fairly vacant proposition. After my 2nd viewing I believe this all the more. The film is basically an indictment of ‘whatever, brah’ liberal lifestyles and relative morality. It’s obviously a doleful Woody Allen-esque comedy of sorts, but it’s also a kind of familial tragedy.” — From “A Tough, Interesting Film Goes Over The Side With Louis C.K.,” an HE post from 11.9.

With Paul Thomas Anderson‘s Phantom Thread due to launch a series of post-Thanksgiving press screenings on Friday, 11.24, 20th Century Fox has informed New York Academy members that the first screening of Steven Spielberg‘s The Post will happen six days hence — Sunday, 11.19 at 7 pm — at the AMC Leows Lincoln Square. A q & a including Spielberg, actors Meryl Streep, Tom Hanks, Bob Odenkirk, Matthew Rhys and Sarah Paulson, and costume designer Ann Roth. A follow-up screening at the same venue is set for Thursday, 12.7 at 6 pm. This viewing will be followed by a chat with Streep, Hanks, “additional cast members” and casting director Ellen Lewis. 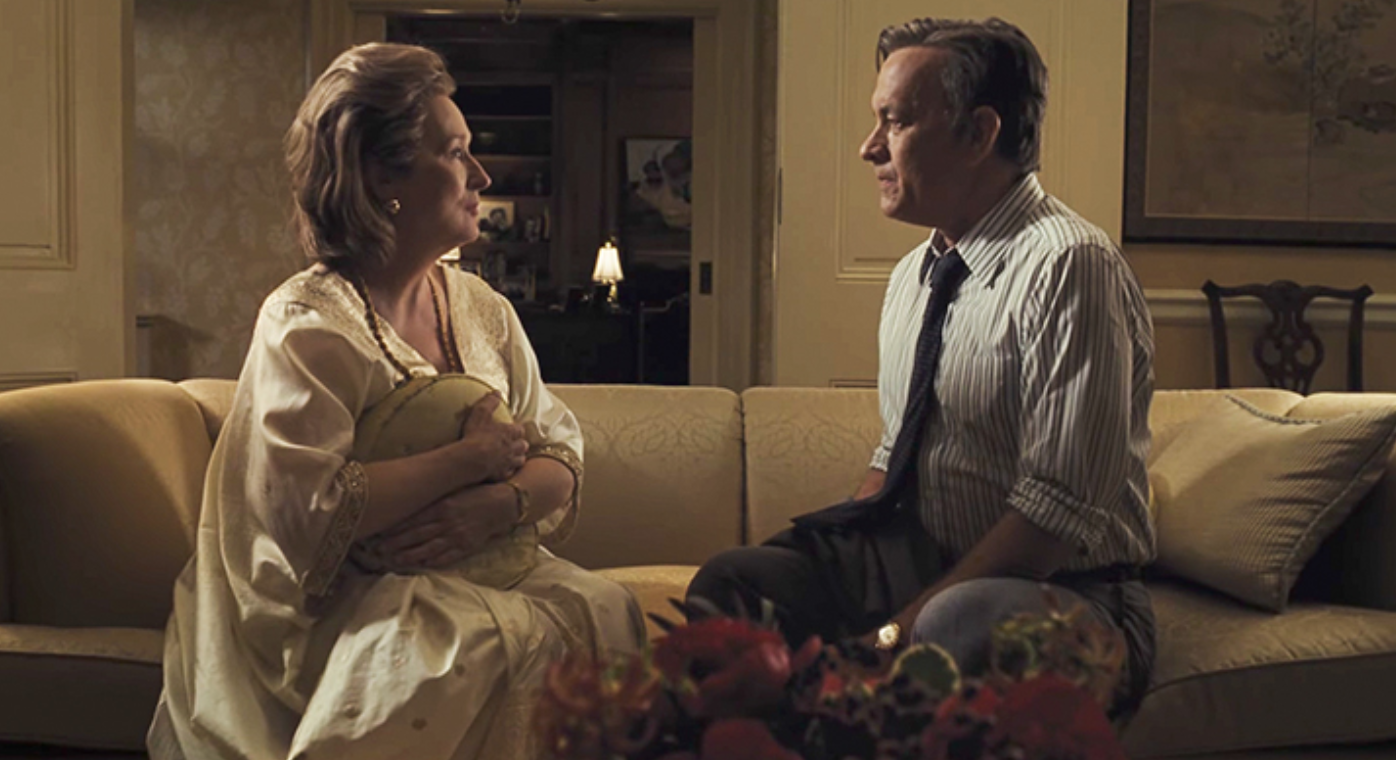 I’ve been informed that Michael Gracey and Hugh Jackman‘s The Greatest Showman (20th Century Fox, 12.25) is not being pushed as a Best Picture contender. It does, however, seem like a crowd-pleasing dazzler in many respects — energy, spectacle, passion, etc. Cinemacon attendees saw variations of this footage last March in Las Vegas. How does it seem to the HE crowd? Sideline reaction: Jackman, just shy of 50, seems a little long of tooth to be playing young P.T. Barnum, who embarked on his entertainment career in 1834, or at age 24.

An invitation to attend several Thanksgiving weekend-and-beyond screenings of Paul Thomas Anderson‘s Phantom Thread (Focus Features, 12.25) arrived this morning. The screenings will happen at Laemmle’s Ahrya Fine Arts Theatre and the American Cinematheque’s Aero in Santa Monica concurrently, and for seven nights straight between 11.24 and 11.30.

What got my attention is the announcement that Anderson plus costars Vicky Krieps and Lesley Manville will do post-screening question-and-answer sessions following three early screenings, but not — a big “not” here — star Daniel Day-Lewis.

On the other hand DDL will take part in a q & a following a Manhattan press screening on Sunday, 11.26. Anderson, Krieps and Manville will also participate in this event, but Day-Lewis is committed to only this and none other, and only in New York City. So we seem to be looking at a somewhat prejudicial anti-Los Angeles situation as far as DDL is concerned. So far, I mean.

The eternally press-shy DDL has, of course, announced that Phantom Thread is his last acting gig before retirement, but it also appears that the 60-year-old actor, whose unseen performance as Reynolds Woodcock has been Best Actor-touted by handicappers, may be selectively ducking meet-and-greets with press and Academy members. Or not. Who knows?

All Oscar contenders submit to Oscar campaign dog-and-pony shows during November, December and January, or during the last three months of “the season.” DDL did a few appearances on behalf of There Will Be Blood and Lincoln, so we’ll see. The initial indication, at least, is that he intends to minimize public appearances.