“Excitement! Suspense! Childlike innocence! Ingeniously staged action set pieces! These are a few of the things you will not find, anywhere, in Jumanji: Welcome to the Jungle (Sony, 12.20). The one performer in the film who establishes his own relaxed rhythm, and stays in it, is Nick Jonas, proving once again that he’s got quick-draw acting chops. The movie has snakes and a crocodile pit and a scorpion slithering out of Bobby Cannavale’s mouth. It’s supposed to be a board game come to life, but really, it’s just a bored game.” — from Owen Gleiberman‘s 12.8 Variety review.

Even though he technically “belongs” in this rogue’s gallery. He did the right thing, listened to his colleagues, took himself out of the conversation.

“How could a movie called Dunkirk, in this day and age, draw so many people to movie theaters across the country? It’s something of a miracle, a giant middle finger to all the claims that there’s no place for big risks on the big screen anymore.

“This is a work of pure cinema, speaking the same language as the cut from flame to desert in Lawrence of Arabia or bone to spaceship in 2001. It’s also remarkably specific. It captures something that feels uniquely British — the exchanges near the end of the film for example, as the weary soldiers return, bottling up a tremendous reserve of feeling within just a few words. There’s a real poetry in their stoicism; for all the bombs and shrieks of gunfire, this is a quiet film.

“In that combination of scope and subtlety, the enormous canvas and the tiny, telling detail, Dunkirk feels closer to the best work of David Lean than any recent movie I can recall.” — Damien Chazelle writing about Dunkirk for Variety.

From “The Colossus of Nolan,” posted on 7.18.17: “Last night I saw a 70mm IMAX version of Christopher Nolan‘s Dunkirk. Staggering, breathtaking, HANDS DOWN BRILLIANT — not just a Best Picture contender for 2017 (obviously) and not just Nolan’s best (ditto) but easily among the greatest war films ever made in this or the 20th Century.

“Saving Private Ryan, step aside. The Longest Day, sorry. Full Metal Jacket, down half a peg. Gabriel’s trumpet is blaring from the heavens — this is a major, MAJOR 21st Century achievement.

“Dunkirk is not just exceptional cinema but majestically its own thing in an arty, stand-alone, mad-paintbrush sort of way — emotional but immediate and breathtaking, but at the same time standing back a bit by eschewing the usual narrative and emotional engagement strategies that 100 other war films have used in the past (and will probably use again and again in the future).

I guess I was too hesitant yesterday in acknowledging that Singer’s explosive temper wasn’t the only reason he left the Bohemian Rhapsody set three weeks before the end of filming. Temper was part of it. He’d gone AWOL on at least one previous film, The Usual Suspects, and allegedly one or two others. But this fresh wave of twink bacchanalia stories can’t be coincidental.

Publicists Liz Mahoney and Megan Pachon have departed IDPR, where they’ve both worked for over a decade and repped clients like Jennifer Lawrence, Greta Gerwig, Amy Adams and Chris Evans. They’re presumably planning to start their own p.r. outfit. This happens in Hollywood; younger operators break off from the big agency and start their own shops. IDPR founders Kelly Bush-Novak and Mara Baxbaum told Variety that Mahoney and Pachon “have grown up at ID, beginning as assistants and becoming formidable publicists…we wish them all the best in their future endeavors.”

According to comments from Indiewire‘s Anne Thompson during the latest “Screen Talk” podcast, the Academy steak-eaters (i.e., older straight dudes with spreading midsections) have shared some eye-rolling opinions, at least in Thompson’s view.

One guy, she says, told her he “didn’t like seeing Sally Hawkins naked” in The Shape of Water, “and I was like ‘oh my God!'” And a lot of men, Thompson says, don’t identify with the young girl protagonist in Angelina Jolie‘s First They Killed My Father.

And one thing that especially concerns Thompson, she says, is that “some of the [Academy] men are not necessarily fond of the feminist message” in Steven Spielberg‘s The Post (Sony, 12.22), and the fact that “it’s not really about journalists chasing down the story and doing the reporting,” as in Spotlight or All The President’s Men. 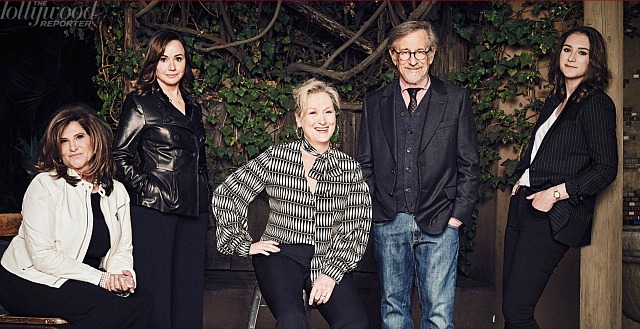 The Post is essentially a story about Post publisher Katharine Graham (Meryl Streep), and about whether or not she’ll find the conviction to risk the Post‘s financial solvency and political security by supporting a fervent desire on the part of Ben Bradlee (Tom Hanks) to publish excerpts from the Pentagon Papers and thereby go up against the Nixon administration.

But it’s also, says Thompson, “about how women were treated at that time. And what worries me is that [Sony award-season strategists] are making a campaign about a woman.”

“And I keep forgetting that in the Academy there are a lot of older guys and a lot of men who are really threatened and freaked out by this sexual harassment stuff…they are really scared of it…it affects the order that they’re accustomed to.”

Everyone recognizes (or will soon recognize) that The Post is a very good film, but, Thompson warns, this doesn’t mean these older, freaked-out guys “are necessarily going to vote for women in the Academy Awards.”

When Allison Janney worked as a record company assistant (presumably sometime in the early to mid ’80s), she was sometimes asked to deliver plain-wrapper packages to this or that musician. Someone eventually confided that she was in fact delivering drugs of whatever kind. No biggie and no foul, but that didn’t make Janney “an unwitting drug dealer,” as she puts it in this Variety chat with Sam Rockwell. Dealers are always in on the scheme. If I’d been part of the conversation, I would have delicately opined that Janney, no offense, was an unwitting mule.

Needless to add, Janney and Rockwell are all but locked as Best Supporting Actress and Actor Oscar nominees for their respective performances in I, Tonya and Three Billboards outside Ebbing, Missouri.