Donald Trump statement on a robocall: “If Alabama elects liberal Democrat Doug Jones, all of our progress will be stopped cold.” For the love of God and for decency’s sake, yes…please!

Do I believe there’s a chance of Jones winning? I honestly don’t. The willingness of a reportedly sizable sector of the Alabama electorate to send a child molestor to the U.S. Senate…what to do except hang our heads in despair? Alabama being a sinkhole of bumblefuck depravity, there are probably too many Roy Moore-supporting yokels in that desperately poor state. I wish it were otherwise.

From a CBS Report posted earlier today: “Just one day ahead of Alabama’s special election, different polls are yielding widely different results for who will win the Senate seat: Democratic candidate Doug Jones or Republican candidate Roy Moore. An Emerson College poll released Monday has Moore holding out with a nine-point lead, while a Fox News poll also released Monday places Jones ahead of Moore by ten points. A CBS News poll from December 3 indicated that Moore was leading Jones, 49 percent to 43 percent.”

Trump has been accused of mashing 16 women, right? They couldn’t at least manage to get ten victims to attend today’s presser?

This morning Indiewire‘s Eric Kohn revealed that director-writer Paul Schrader has “found a wild, unprecedented workaround” to restore or reconstitute the “mangled” theatrical cut of Dying of The Light (which I hated) and “into the movie he intended all along.”

It’s called Dark, but the only way to see it is to request a viewing at the UCLA Film Archives in Los Angeles and the Harry Ransom Center at the University of Texas, Austin. It can’t be commercially streamed for the usual commercial infringement reasons.

Dark was “literally assembled out of fragments ripped from the theatrical cut and transformed into a kind of post-modern collage that’s closer to the filmed installation art of Douglas Gordon (24 Hour Psycho) than a cohesive narrative,” Kohn writes. “Originally 94 minutes, it now runs just over 70, and the climactic showdown has been replaced by an abstract light-and-color show as Nicolas Cage‘s character completes his descent into madness.”

I’ve been a reborn Schrader-ite since seeing First Reformed about three and a half months ago.

I’d love to re-watch mother! within the scheme of this clip — a fast-moving camera following Darren Aronfosky‘s crew as they shoot the action like there’s no tomorrow and no second chance. This way you’re freed from the claustrophobic feeling of being stuck in that big house and inside the heads of Javier Bardem and Jennifer Lawrence, but without sacrificing the story or the intensity. You’d think that being a huge Aronofsky fan and something of a hotshot columnist I’d rate a free Bluray — nope. I just bought a streaming copy.

Various outlets are reporting that ace political reporter Ryan Lizza has lost his New Yorker job over allegations of sexual misconduct. A New Yorker statement says management recently learned that Lizza “engaged in what we believe was improper sexual conduct…we have reviewed the matter and, as a result, have severed ties…due to a request for privacy, we are not commenting further.”

Lizza has disputed the magazine’s description of his firing: “I am dismayed that The New Yorker has decided to characterize a respectful relationship with a woman I dated as somehow inappropriate. The New Yorker was unable to cite a company policy that was violated.

“I am sorry to my friends, workplace colleagues and loved ones for any embarrassment this episode may have caused. I love The New Yorker, my home for the last decade, and I have the highest regard for the people who work there. But this decision, which was made hastily and without a full investigation of the relevant facts, was a terrible mistake.”

“But He Still Keeps On Trying,” posted on 12.12.16: Last night I watched the last three episodes of HBO’s Divorce, which I’ve liked enough to stay with but not enough to write about.

“But here I am writing about the music played over the closing credits of episode #10 — the Little River Band‘s “Lonesome Loser.” This was never more than a second-tier song (the lyrics are kind of awful in a self-pitying way) but it got me nonetheless. Because the chorus has a nice hooky harmony thing, and because it’s been 30-plus years since I’ve had a listen. All to say there are some songs out there that you know aren’t very good but you listen to them anyway, especially when you’re driving. I have a place in my head for songs like this, and I’m sorry.”

The world is dead, gone, rotten, ruined. Nothing to do but retreat into VR realms which are much more robust, dimensional and rich with possibility. Better to live in a gleaming digital universe, full of boundless adventure and blah-dee-blah, than to face the dystopian nothingness.

This is how your typical gamer lives today, of course. Reality is for sleeping, working, inhaling junk food, exploring states of sedentary squatfuckitude and avoiding news sites, organic-world relationships and most of all exercise. Because the real “living” is done within.

Steven Spielberg‘s adaptation of Ernest Cline‘s 2011 best-selling sci-fi novel is a fantasy about dying qnd retreating — a futuristic tale about Wade Watts (Tye Sheridan), a dystopian-era gamer who spends most of his time in the Oasis, which is where he “joins a hunt for valuable easter egg left by the game’s now-deceased creator” — Mark Rylance — “who intends to give away his entire fortune (including the rights to the Oasis) to the first person who can find the hidden object,” blah blah.

Friend: “You didn’t get this invite? They showed it to HFPA around Thanksgiving but for some reason didn’t screen it for general press until yesterday. Great holiday musical . Fantastic Pasek and Paul score. Great Bob Fosse-like opening number. Great choreography too. What Globes comedy or musical category is made for.”

Me: “Nope — they didn’t invite me. Blank, silencio. And I don’t have a problem with musicals per se, and they invited me to the 11.28 ‘listening party’ at the Four Seasons. Which I covered right away.” 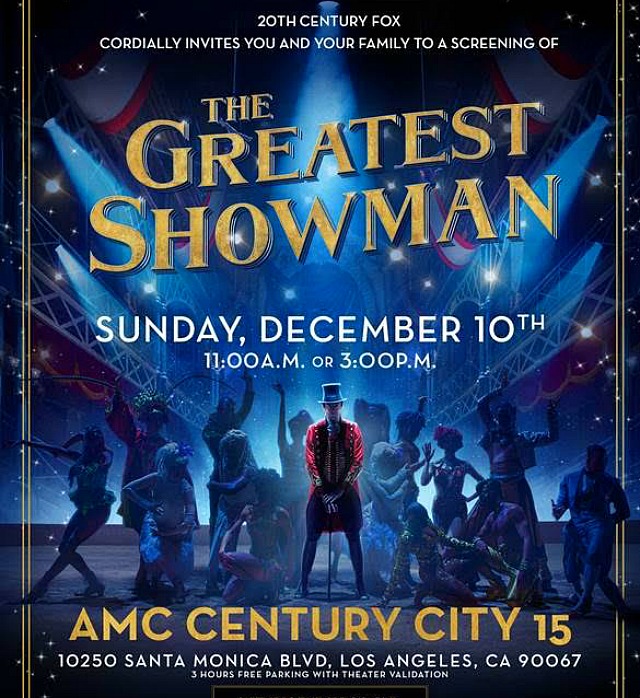 Yeah, I know — The Greatest Showman? Michael Gracey and Hugh Jackman‘s musical about P.T. Barnum hasn’t screened for non-Golden Globe members like myself, and is generally presumed sight unseen to be something of an odd duck — a big-screen musical for musical fans but perhaps not for discriminating types. Who knows?

In my realm there’s only been that March ’17 Cinemacon presentation plus a recent “listening party” at the Four Seasons. The film pops on 12.20 or nine days hence, and I’ve yet to receive a screening invitation. Update: Fox screened it twice yesterday at the AMC Century City, but they didn’t think to invite me. Thanks!

Theatrically speaking and for the most part, the 2017-18 Golden Globe Award nominations delivered the expected.

The five Best Picture, Drama nominees — Call Me by Your Name, Dunkirk, The Post, The Shape of Water, Three Billboards Outside Ebbing, Missouri — fell right into place, and four out of the five nominees for Best Picture, Comedy or Musical — The Disaster Artist, Get Out, I, Tonya, Lady Bird — made basic sense.

Lady Bird‘s Greta Gerwig and Call Me By Your Name‘s Luca Guadagnino got shafted in the Best Director category. While Guadagnino and Gerwig arguably deserved more Best Director recognition this year than their competitors as their films were the most buoyant and self-owned and fully felt, the HFPA snubbed them. Brilliant!

Get Out‘s Jordan Peele didn’t make it either, but I’m okay with that.

The five Golden Globe nominees for Best Director are Guillermo del Toro (The Shape of Water), Martin McDonagh (Three Billboards Outside Ebbing, Missouri), Christopher Nolan (Dunkirk), Steven Spielberg (The Post) and…wait, Ridley Scott for All The Money in the World?

Scott’s period kidnapping drama won’t begin screening for regular press until this Friday, but the HFPA was shown a close-to-finalized version last Monday (12.4). It seems as if the HFPA wanted to do Sony Pictures a solid for this special access, and to tribute Scott for his ultra-fast work in recently re-shooting Kevin Spacey‘s scenes as J. Paul Getty with Christopher Plummer.

Plummer, by the way, nabbed a Best Supporting Actor nom for this last-minute performance. The other four nominees are Willem Dafoe (The Florida Project), Armie Hammer (Call Me by Your Name), Richard Jenkins (The Shape of Water) and Sam Rockwell (Three Billboards Outside Ebbing, Missouri).

The race is between Dafoe and Rockwell, with Dafoe favored.

For some perspective on the wisdom of the HFPA, consider that the unquestionably brilliant Call My By Your Name nabbed three nominations, and that this was the same tally for the unseen and probably negligible The Greatest Showman. All the Money in the World, another unseen which may turn out to be quite good, also managed three noms.