Support on Patreon Follow @wellshwood
70 Comments
Solution To A Problem

On 12.14 The Hollywood Reporter‘s Borys Kit reported that Benny and Josh Safdie (Good Time) will direct a remake of Walter Hill‘s 48 HRS (’82). The original script, co-written by Hill, Roger Spottiswoode, Larry Gross and Steven de Souza, is about a racist tough-guy cop (Nick Nolte) springing a black convict (Eddie Murphy) from jail in order to gain an inside advantage in tracking down a pair of cop killers.

The problem, it seems to me, is that the racial epithets that came out of Nolte’s mouth 35 years ago will sound over-the-top horrendous by today’s cultural standards. Nolte’s Jack Cates calls Murphy’s Reggie Hammond the “n” word, for one thing, not to mention “spearchucker” and a couple of other terms that haven’t been heard in commercial films in a long time.

How to get around this? Reverse the ethnicity of the leads. Use a snarly, middle-aged black actor to play Nolte’s detective, and a younger white actor to play Murphy’s convict, except make him an under-educated alt-right guy.

After debuting 11 months ago at the 2017 Sundance Film Festival, Maya Forbes and Wallace Wolodarsky‘s The Polka King, a reasonably decent real-life dramedy, will begin airing on Netflix on 1.12.18.

I called it “a briskly paced, broad-brush tragicomedy that’s aimed at the none-too-hips. It’s funny and engaging as far as it goes — a kind of regional (i.e., Pennsylvania-based) farcical screwball thing. It has a tightly sprung comic attitude, and is packed (as you might presume) with traditional polka music, colorful, behind-the-eight-ball characters and all kinds of local douchebag flavor.

“It’s a bit like The Wolf of Wall Street in that it’s about a manic, larger-than-life polka-singing hustler — the real-life Jan Lewan — who ponzi-schemed his way into a five-year jail sentence about 15 years ago. The difference is that while Wolf was a half-satirical portrait of predatory financial-market culture, Polka King is about a guy who tries to flim-flam his way out of financial difficulty only to wind up in an even deeper hole.

“You know going in that the buoyant, Polish-born Jan (entertainingly nailed by the great Jack Black) is headed for a fall, so the movie is basically a waiting game — how long before Jan’s bullshit finally catches up with him? The Polka King therefore lives or dies based on how diverting or hilarious you find delusion and denial as the hallmarks of a business plan.

“I for one didn’t find it hugely amusing –the only film about relentless lying and flim-flammery that I’ve liked was Robert Zemeckis‘ Used Cars — but I took the ride and had a decent-enough time. I recognize that others who caught The Polka King last night (as I did) are down with it more than I, and that it may well prove a commercial success.

I’ve had the BFI Bluray of Ken Russell‘s Women In Love (’69) on my bookshelf since August 2016. Yesterday it was announced that Criterion will be releasing its own version on 3.27.18. The Criterion will almost certainly look identical to the BFI. Both are 4K scans of a BFI-restored print from 2015; both using a 1.75:1 aspect ratio and running 131 minutes.

The Criterion jacket features a painting of drowned lovers, taken right from the film. More alluring than the still images on the BFI Bluray.

Released just over 48 years ago but looking fresh from the lab, Women in Love is one of the most lusciously captured films ever made about men, women and relationships (and I’m not just talking about the nude wrestling scene between Alan Bates and Oliver Reed), and one of the most articulate portrayals of the sadnesses and frustrations that plague so many lovers.

Posted on 8.21.16, but applicable right now: “If Women in Love had never appeared in ’69 and yet was somehow recreated by a fresh creative team and released this fall by Focus Features or Fox Searchlight, it would instantly vault into the Best Picture category. Because nobody and I mean nobody makes brainy, pulsing period dramas as good as this for the theatrical market any more.”

43 Comments
Feinberg Buying Get Out Hype

This morning The Hollywood Reporter‘s Scott Feinberg posted a pre-holiday Oscar race chart. One standout call was Feinberg’s decision to throw in with Variety‘s Kris Tapley by describing Darkest Hour as a “maybe not” in the Best Picture race. In Feinberg parlance and especially in mid-December, “maybe not” contenders are given a “major threat” designation…same difference.

But even more striking is the sudden influence of the just-announced SAG Ensemble Award nominees, and particularly Feinberg’s decision to place Get Out at the very top of the Best Picture list.

Everyone realizes that Get Out is a tenacious contender that has struck a nerve, and that a Best Picture nomination is 100% locked. But placing it ahead of everything else seems….what, excessive? Delusional?

Do I have to say again that the three most Oscar-deserving films of the year — Call Me By Your Name, Lady Bird and Dunkirk — are the most independent-minded and very much singing their own tune, and are far more adventurous and accomplished than Get Out?

HE readers are probably sick of this opinion, but what am I supposed to say about Feinberg going apeshit for Get Out? Declare what a seer he is? 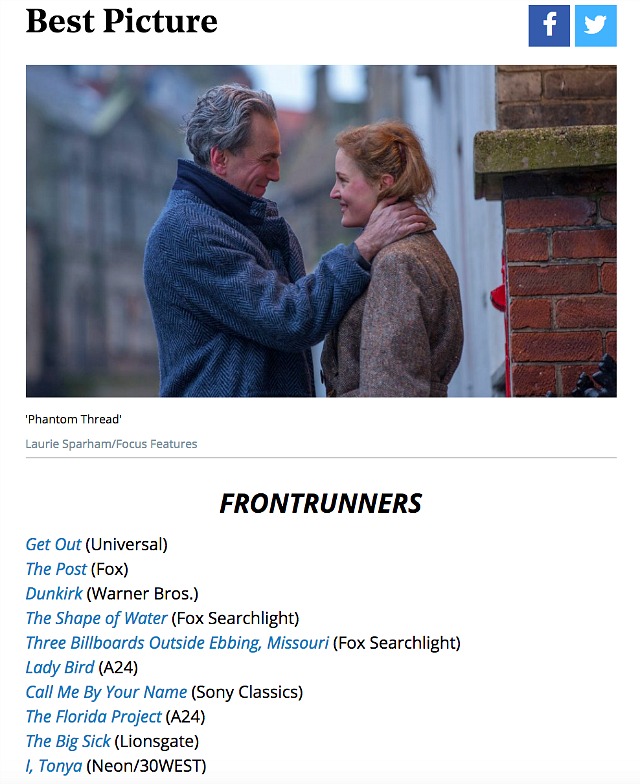 As for the mystifying Daniel Kaluuya for Best Actor thing, I riffed on that the other day.

Two friends disagree. “Scott’s call isn’t delusional at all,” says critic #1. “I have a feeling Get Out is going to win too. I just need more intel to make a full prediction. Right now it’s down to three: Get Out, Lady Bird and Three Billboards outside Ebbing, Missouri.”

Critic #2 says that Kalyuua gives “a strong performance in an important film, and [the Kaluuya talk] is retroactive justice for Sidney Poitier NOT getting a Best Actor nom for In the Heat of the Night 50 years ago, while costar Rod Steiger did and won the category.”

So 2017 is not the year of women pushing back at the patriarchy and sexual misconduct, and we’re still offering make-up apologies for #OscarsSoWhite?

“I don’t see it that way,” critic #2 replied. “Get Out overcame its genre stereotyping to become one of the most significant and talked-about films of 2017.”

For the 37th or possibly 38th time, Get Out is just a hooky genre film — a satirical horror-thriller that delivers a social metaphor message a la Don Siegel‘s Invasion of the Body Snatchers, and is pitched squarely at mainstream liberals. That’s really ALL IT IS. But when you add the cheering section factor, Get Out begins to morph into this on-target, Bunuelian, capturing-of-a-zeitgeist film. Sizzle overwhelming the actual flavor of the steak.