Support on Patreon Follow @wellshwood
136 Comments
The Fault Was With Williams’ Agent, No?

USA Today‘s Andrea Mandell just reported that Mark Wahlberg was paid $1.5 million for reshooting his scenes in Ridley Scott‘s All the Money in the World over a nine-day period, but costar Michelle Williams was basically paid zip — an $80 per day per diem for a total of less than $1000.

Mandell quoted “three people familiar with the situation but not authorized to speak publicly about it.” 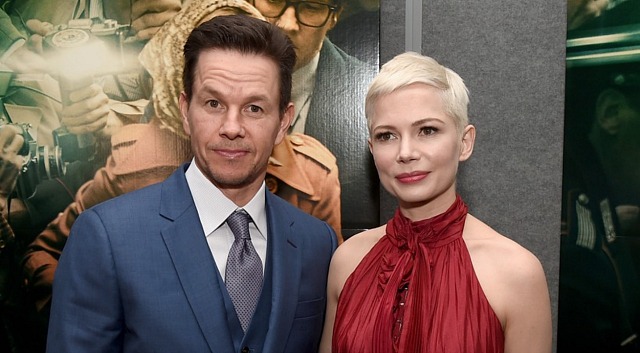 Mark Wahlberg, Michelle Williams at All The Money in the World premiere in Beverly Hills.

The pay disparity wouldn’t appear to be any fault of Wahlberg’s, although this looks a lot like classic payroll sexism. Nor was it Scott’s doing, I’m guessing. (Although I know nothing.) The drop-the-ball person in this equation is Williams’ agent, whose name escapes at the moment. In 2014 Williams left CAA for William Morris Endeavor. Maybe Williams was just trying to help by not being grasping, but why would the person in charge agree to pay Wahlberg $1.5 million if she agreed to do it for nothing?

The ATMITW re-shoot happened in Rome and London between 11.20 and 11.29, or less than a couple of months ago.

BEST PICTURE: Call Me by Your Name

BEST ACTOR: Timothee Chalamet, Call Me by Your Name

BEST SUPPORTING ACTOR: Michael Stuhlbarg, Call Me by Your Name

BEST YOUNG ACTOR/ACTRESS: Dafne Keen, Logan (I liked The Florida Project‘s Brooklyn Prince as much as everyone else, but I was really knocked out by Keen)

BEST DIRECTOR: Luca Guadagnino, Call Me By Your Name

BEST ADAPTED SCREENPLAY: James Ivory, Call Me by Your Name

Is Trust going to run with the notion that John Paul Getty III engineered his own kidnapping to get money out of grandpa? The trailer seems to suggest this. Donald Sutherland‘s performance as the stingy billionaire of legend is going to be worth watching. Brendan Fraser has the same Fletcher Chase role that Mark Wahlberg played in All The Money in the World, but good God, Fraser looks like an inflated balloon. The ten-episode series begins on FX on 3.25.18.

Now it’s time for a fifth involving the installation of seed-pod mindsets, with the change agents being the Millennial and Generation Z sons and daughters of today.

I’m talking about a scenario in which the Anglo Saxon whitebread gene is regarded as inherently arrogant, criminal and bad for the planet — flawed, cruel, heartless, exploitive. A consensus emerges that the only way to correct this abhorrent culture is to fully indict the historical criminality of whiteness over several decades and in fact back to the beginnings of this nation — what it’s been, what it is now and where it’ll lead if things aren’t turned around.

Alien spores float down from space, affecting only the children and grandchildren of boomers and GenXers. Once turned, the awoken are free to call Anglo-Saxon culture by it’s true name — oppressor, a cancer, a scourge upon humanity. Within days the idea is spread that it’s time for enlightened non-whites to marginalize or dilute or even overthrow white culture so that POC culture can re-shape things and bring in a little fresh air and more fairness, freedom and opportunity.

Gradually seed-pod consciousness spreads to members of the liberal intelligentsia, and more and more of them are suddenly embracing the program. The general idea is “let those shitty old crusty white guys eat some of the shit that POCs have been eating for the last couple of centuries,” etc.

Gradually it becomes accepted that if you’re white and straight you’re kind of a bad person, or at the very least suspect. And that you probably need to re-educate yourself and embrace the new reality…or else.

A clever horror-comedy satire that ten years ago would have come and gone and been forgotten by awards season is transformed by seed-podders into a Best Picture contender, and those who question the validity of this are regarded as cranks or closet racists.

Friends and family members of seed-pod film critics begin to notice a certain robotic manner and a glassy, out-to-lunch look in their eyes. Local constable: “But he looks like his picture, madam. Obviously he’s Guy Lodge, the Variety critic.” Mrs. Lodge: “But it isn’t him, I’m telling you. Something is missing. It’s just not Guy!”

Liberal-minded film critics Anne Thompson and Eric Kohn declare that they’ve been making sure that POCs are ranked prominently in their year-end awards ballot, partly because they admire their films but also because they’re about or were made by POCs.

Seed-pod urban culture begins to adopt other changes. Millenial and GenZ types begin to regard heterosexuality as a problem, and it’s gradually decided that it’s time to let LGBTQ folks run the culture and push heteros off to the side a bit. They’ll be allowed to walk around and buy groceries, but they need to accommodate themselves to the notion that straight whites are an underclass.

And if educated liberal Democrat white guys complain about any of this on social media platforms, the seed-podders tag them as closet Republicans or closet racists or closet homophobes. Would the seed-podders be delighted to bust these white guys on any of these counts and thereby eradicate or at least marginalize their asses and put them out to pasture? You have to ask?

The transforming of society has never been a gentle process, and to make an omelette you have to break a few eggs.

A libertarian-minded #MeToo pushback essay appeared in today’s (1.8.18) Le Monde, and the headline is a grabber — “We defend a freedom to annoy, [which is] indispensable to sexual freedom.”

Written by clinical psychologist and psychoanalyst Sarah Chiche and supported by more than 100 “prominent” French women including Catherine Denueve and Catherine Robbe-Grillet, it basically says that the #MeToo movement is attacking sexual freedom and “binding women to a status of eternal victims”, and is becoming more or less Stalinist (my term, not theirs), and has thereby overstepped and made social and cyber life feel oppressive in some respects.

Here is the essence of the essay: “The philosopher Ruwen Ogien defended a freedom to offend essential to artistic creation. In the same way, we defend a freedom to annoy, indispensable to sexual freedom. We are now sufficiently warned to admit that the sexual drive is by nature offensive and savage, but we are also sufficiently clairvoyant not to confuse clumsy [attempts at flirtation with] sexual assault.”

I’ve explained over and over that the three strongest knockout films of 2017 are Luca Guadgnino‘s Call Me By Your Name, Chris Nolan‘s Dunkirk and Greta Gerwig‘s Lady Bird. In picking the most deserving recipient of the Best Picture Oscar, Academy members ought to choose between these three. They really ought to. Because Nolan’s is a brilliant, IMAX-sized work of art and a God’s-eye war film, and Guadagnino’s is a lulling, levitational love story for the ages, and Gerwig’s is a coming-of-age film with a wonderful prickly edge.

But nope, sorry, not happening. Dunkirk isn’t emotional enough, Call Me By Your Name has to stand down because older straight white guys don’t want to celebrate another gay film after Moonlight, and Lady Bird is just a flick about an anxious, creatively stifled high school girl. And so a pair of very worthy but slightly lesser films — Guillermo del Toro‘s The Shape of Water, which received 12 BAFTA noms, and Martin McDonagh‘s Three Billboards outside Ebbing, Missouri — are stepping into the breach.

This seems to be the meaning of this morning’s BAFTA nominations, if they can be processed as foreshadowings of the 2018 Oscar nominations (which will be announced on 1.23). The 12 noms won by The Shape of Water plus the nine noms that went to Three Billboards means they’re the tippy-toppers right now.

Joe Wright‘s Darkest Hour also received nine BAFTA noms, but you have to write some of that off to the Churchill factor (i.e., genetic British nationalism).

In other words, Fox Searchlight almost certainly has the Best Picture Oscar in the bag. After 1.23 it’ll be competing with itself on behalf of Three Billboards and Shape of Water. Not tooth and nail, of course, but voters will have to choose. Hollywood Elsewhere hereby congratulates FS on a fight well won, and twice over at that.

In Shape, Michael Shannon‘s villain is way too one-note demonic, Doug Jones‘ aquatic creature has no personality or longing other than to be loved and protected, and it’s ludicrous to presume (as the movie tells us) that Shannon wouldn’t instantly conclude that Hawkins’ apartment is the only place to look when Jones turns up missing at the lab.

And Three Billboards is suspended in a fantasy realm in which McDormand evades the consequences of drilling a dentist’s thumbnail and firebombing a police station (despite Peter Dinklage vouching for her in the latter case), and Rockwell suffers no legal prosecution or civil lawsuit after he throws Caleb Landry Jones out of a window and off a roof.

And yet The Shape of Water and Three Billboards are the two apparent finalists because (a) they supply enough emotion and aren’t chilly in a Nolan-esque sense, (b) they don’t irritate older white guys by being gayish (Richard Jenkins‘ Shape character aside) and (c) their stories and themes are bigger and broader than that of a Sacramento high-school senior looking to go to college back east. They’re soft consensus favorites, and that’s how it seems to be going right now. 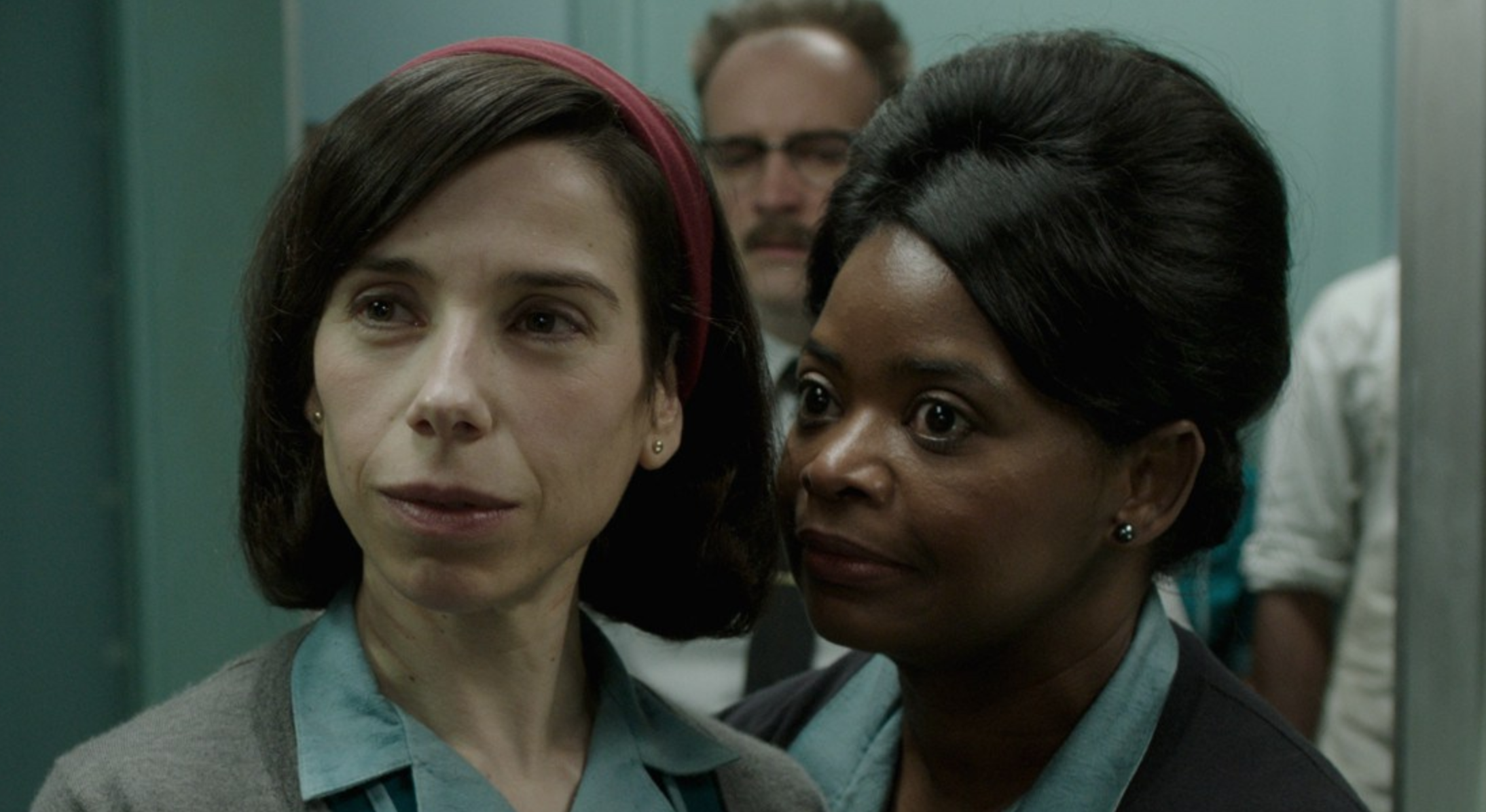 26 Comments
Not Until Last Night

“A book is an entirely different thing…[White House reporters] can’t say what they know because they have to go back the next day…politics don’t matter…everybody looks at Trump the same way…this is an aberrant moment…early-stage dementia,” etc.