“I have been asked in a few recent interviews about my decision to work on a film with Woody Allen last summer,” Timothy Chalamet said on Instagram Monday evening. “What I can say is this: I don’t want to profit from my work on the film, and to that end, I am going to donate my entire salary to three charities: TIME’S UP, the LGBT Center in New York and RAINN.”

In other words, Chalamet considers his fee for acting in Allen’s A Rainy Day in New York to be dirty money, which is tantamount to calling Allen a dirty filmmaker, or more precisely a guilty filmmaker. 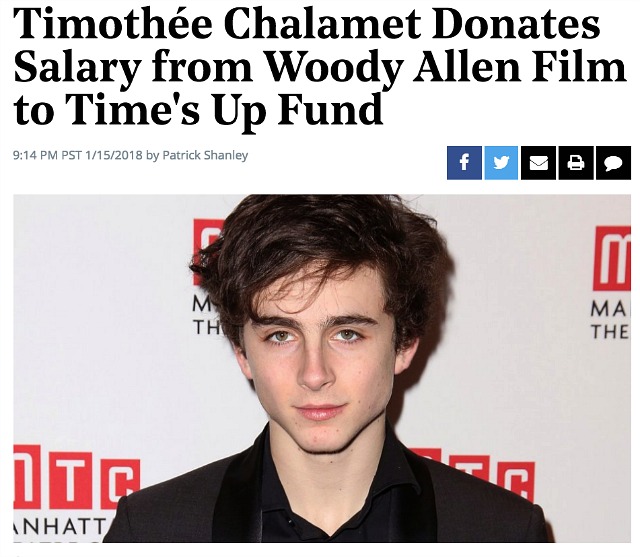 Along with other actors, Chalamet has presumably arrived at this belief by way of faith and solidarity with Dylan Farrow and her longstanding charge that Allen sexually abused her as a child. It’s well known that facts, evidence, two investigative agencies and Farrow’s own brother, Moses Farrow, strongly dispute Dylan’s recollection, but that’s not Chalamet’s concern at this point.

The 22 year-old actor is playing it smart for the sake of his career and the maintaining of a progressive, forward-looking, Time’s Up-embracing industry profile among his contemporaries. It is far easier and safer to throw in with the anti-Woody gang (Greta Gerwig, Mira Sorvino, Rebecca Hall, Natalie Portman, Reese Witherspoon). Throw the 82 year-old filmmaker under the bus, terminate his career, wash your hands.

Chalamet had no choice, right? His career would have definitely been hurt if he’d taken Allen’s side or adopted a neutral posture. He had to join the throng.

Hollywood Elsewhere has been saying all along that Chalamet’s Call Me By Your Name performance is far richer and miles above Gary Oldman‘s broad performance as Winston Churchill in Darkest Hour. But I can’t honestly say that I admire Chalamet at this point in time, or that tonight’s statement has shown him to be a man of balls and character.

For the 17th time, the facts are right here in Robert Weide’s 12.13.17 piece, “Q & A With Dylan Farrow.” I realize that facts are secondary in this matter, but they should matter to some degree…no?

McMafia, the eight-part BBC1 minseries that will begin airing on AMC on 2.26, is based on a same-titled book by Misha Glenny and directed by James Watkins.

Glenny chose the name McMafia “because of how professional, organized and homogenous international gangsters have become,” it says here.

As Semiyon Kleiman (David Strathairn) tells banker Alex Godman (James Norton), “These people dress like bankers, they speak a dozen languages, they eat in the best restaurants, stay in the best hotels. But underneath all that sophistication, there’s an open grave in the Mexican desert with 50 headless corpses inside.”

McMafia “has been criticized for its stately pace and complex plotting,” a review stated. “It can feel a little po-faced, lacking the wit of a Hugh Laurie or a Tom Hollander, who both brought light and shade to The Night Manager.

Welcome, much-needed changes to the movie industry have already been brought about by #Time’s Up and #MeToo, but it was suggested during a dinner last night that some kind of new Hays Code agreement might eventually be adopted by the motion picture, TV and streaming community. I wasn’t told, mind, that this idea is actually being kicked around, but a friend believes that the current climate might lead to such a measure, and who knows?

The new Hays Code agreement could partly seek to eliminate gender discrimination and pay disparity between men and women. I for one think that’s a pretty good notion if fairly implemented.

The friend also suggested, however, that another goal might be to institute sexual morality advisories that would discourage depictions of sexual misconduct and assault against women and minors without appropriate consequence. The sexual morality portion would be a matter of tremendous concern to filmmakers, he said. I don’t think I need to explain why this concern would be manifest among directors and screenwriters of all stripes and stations.

Again, I’m not saying that such an agreement is actually being discussed by anyone, but where there’s conversational smoke there’s sometimes fire. Maybe. I’m mentioning this because before last night I’d never heard such an idea, even in the loosest of conversations. We are witnessing, after all, the gradual emergence of a new form of liberal Calvinism these days, so it wouldn’t be totally crazy if a #Time’s Up production code was eventually agreed upon and instituted.

When we say Hays Code (named for Will Hays) we really mean the Breen code (named for Joseph Breen). It was adopted in response to what some regarded as a climate of tawdry morality in movies of the early 1930s. The code was a set of moral guidelines that was applied by major studios from 1934 to roughly 1968.

The code began to slowly erode in the late ’50s and early ’60s, but it ended with a bang when Elizabeth Taylor said “goddam you” to Richard Burton in Mike Nichols‘ Who’s Afraid of Virginia Wolff (’66).

Last night I spoke to a knowledgable industry friend who agrees with Mark Harris about Woody Allen’s career being toast. While he’s appalled and horrified by the current terror and believes that the only sane response is to duck and wait it out, he also thinks A Rainy Day in New York will be over, done and finito for the Woodman.

He also suspects that Amazon will jettison A Rainy Day in New York, although they’ll look like gutless political cowards if they do this. On the other hand Call Me By Your Name star Timothee Chalamet, who costars in Rainy Day, will have to answer very carefully when a questioner brings up the Allen hoo-hah on the next red carpet.

He said that Woody needs $25 million to make his films, all in, and that he’s not going to be able to raise this without significant name-brand U.S. actors along with general support from the U.S. film industry. My friend didn’t say that Allen’s films are obviously winding down anyway in terms of quality, but others have noted this.

He’ll have to scale his fee and production costs way down to make a European-centric feature — $10 million or even $9 or $8 million. He’ll have to shoot guerilla-style, hip pocket, on the fly, available light, etc.

Not MLK. The living swine from Wisconsin, I mean. 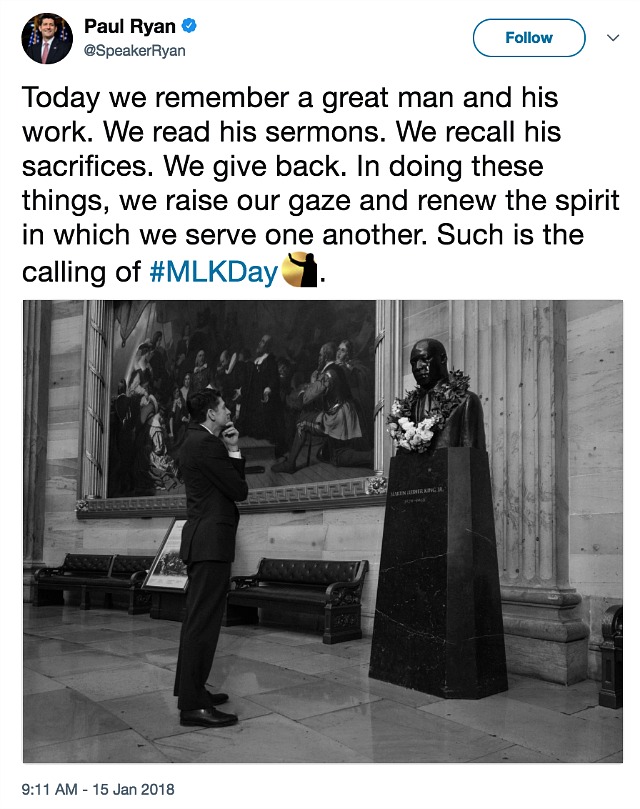 In a 1.13.18 Globe and Mail piece, The Handmaid’s Tale author Margaret Atwood lamented to some extent the Robespierre-resembling tendencies of some of the #MeToo brigade. The article was titled “Am I a Bad Feminist?” Here’s an excerpt:

“There are, at present, three kinds of ‘witch’ language. (1) Calling someone a witch, as applied lavishly to Hillary Clinton during the recent election; (2) ‘Witchhunt,’ used to imply that someone is looking for something that doesn’t exist, and (3) The structure of the Salem witchcraft trials, in which you were guilty because accused. I was talking about the third use.

“This structure — guilty because accused — has applied in many more episodes in human history than Salem. It tends to kick in during the ‘Terror and Virtue’ phase of revolutions — something has gone wrong, and there must be a purge, as in the French Revolution, Stalin’s purges in the USSR, the Red Guard period in China, the reign of the Generals in Argentina and the early days of the Iranian Revolution.

“The list is long, and Left and Right have both indulged. Before ‘Terror and Virtue’ is over, a great many have fallen by the wayside. Note that I am not saying that there are no traitors or whatever the target group may be; simply that in such times, the usual rules of evidence are bypassed.

“Such things are always done in the name of ushering in a better world. Sometimes they do usher one in, for a time anyway. Sometimes they are used as an excuse for new forms of oppression. As for vigilante justice — condemnation without a trial – it begins as a response to a lack of justice — either the system is corrupt, as in prerevolutionary France, or there isn’t one, as in the Wild West — so people take things into their own hands.

Five days ago (1.10.18) “Yellow King Film Boy” posted an excerpt from a Gary Oldman interview. Stanley Kubrick‘s method of directing actors (“Do it again, please”) is alluded to,. Starting at 1:40 Oldman passes along a tale he’s heard about why Harvey Keitel walked off the set of Eyes Wide Shut.

Keitel, says Oldman, was performing a bit in which he was just “walking through a door, and after 68 takes Keitel said, ‘I’m outta here, you’re fucking crazy…you’re fucking out of your mind.’ Because [Kubrick] would just say ‘do it again’…[he didn’t explain] what he was looking for, just ‘do it again’….I love Kubrick’s movies, but I don’t know how I would’ve worked with that.”

Oldman’s story is okay as far as it goes, but almost every actor who’s ever been in a Kubrick film has gone through this process of doing endless takes. Before signing on Keitel had to have heard about this tendency, so Oldman’s story makes Keitel seem like a guy with a short fuse and a temper.

The other story about why Keitel left Eyes Wide Shut is almost certainly bullshit, but it was passed along by director Lars von Trier, who was doing promotion for The Idiots at a Hotel du Cap press junket during the May 1998 Cannes Film Festival. The Danish director was chatting with a group of journalists in some cabana, and before passing along the Keitel story, which he got from a below-the-liner who had worked on Eyes Wide Shut before working for Von Trier, he told the journalists to shut off their tape recorders.

One of these journalists was F.X. Feeney, who told me the story a year or two later.