Every year the Santa Barbara Film Festival presents a panel discussion among screenwriters. It always happens on the festival’s first Saturday at the historic Lobero theatre. Indiewire‘s Anne Thompson has been hosting this event for the last several years, and the sense of deja vu is very pronounced because it’s always the same softball session.

The screenwriters are given a chance to tell their stories in an amusing or colorful way and everyone has a nice easy time, and sometimes questions from the audience are allowed. But nobody ever pokes or prods.

Nobody asked Shape of Water screenwriter Vanessa Taylor why she and Guillermo del Toro decided against defining Doug Jones‘ Aquaman in any way you’d remember — no personality, longings, traits. Nobody asked The Post‘s Liz Hannah about the major Oscar-bait headwind that her film enjoyed before it was screened, and how it all collapsed when Steven Spielberg‘s film was quickly elbowed aside by the critics group and the guilds. Nobody asked Baby Driver maestro Edgar Wright about why he folded his campaign after the Kevin Spacey scandal. Nobody asked The Disaster Artist‘s Michael Weber about the sudden torpedoing of director-star James Franco over alleged sexual misconduct.

Every side-angle or hot-button question was avoided like the plague. But that’s why we enjoy this panel each and every year. 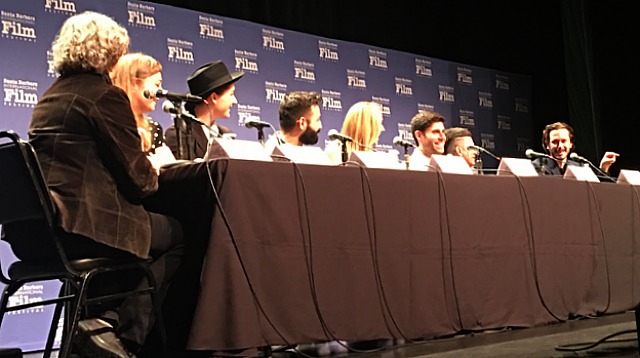 In Andrew Wagner‘s Breakable You, Holly Hunter (The Big Sick) is a newly divorced therapist who becomes romantically involved with her plagiarizing playwright ex-husband’s brother. I’m okay with Tony Shalhoub as the ex (as long as he keeps his shirt on), but Alfred Molina is a no-go as the amorous brother. There are actors you never want to consider or imagine in an intimate context, and Molina, no offense and God bless him, is one of them. Just as audiences of the ’30s, ’40s and ’50s never wanted to contemplate Charles Coburn in a sexual light. Brian Morton’s source novel was published in 2006.

I had a traumatic birth, which gives you a certain antsy outlook on things. By the time I was six or seven I was feeling very angry at God for giving me such a miserable life in suburban New Jersey, and especially for giving me such strict, hard-nosed parents, particularly a mother who made me go to church every damn Sunday. In my tweens and teens I went through a period of mocking and taunting Him. Then I embraced and worshipped Him as a result of my mystical LSD trips in my early 20s. Then I came to an understanding that God is, depending on how lucky or unlucky you are in terms of parental or tribal lineage and birth location, at best impartial about whether you’re living a happy or miserable life. It’s up to you. If you want happiness and you’re not living under a horrible dictatorship, orchestrate your own version of happiness or fulfillment, being careful not to make things worse for others.

In a just-posted N.Y. Times piece, Uma Thurman has told Maureen Dowd some specifics about Harvey Weinstein having sexually assaulted her, but the main thing is her continuing rage at Kill Bill director Quentin Tarantino for having forcefully cajoled her into driving a shitty, rickety Karmann Ghia during a sequence set in rural Mexico. She wound up hitting a palm tree.

“The steering wheel was at my belly and my legs were jammed under me,” Thurman says. “I felt this searing pain and thought, ‘Oh my God, I’m never going to walk again.’ When I came back from the hospital in a neck brace with my knees damaged and a large massive egg on my head and a concussion, I wanted to see the car and I was very upset. Quentin and I had an enormous fight, and I accused him of trying to kill me. And he was very angry at that, I guess understandably, because he didn’t feel he had tried to kill me.” 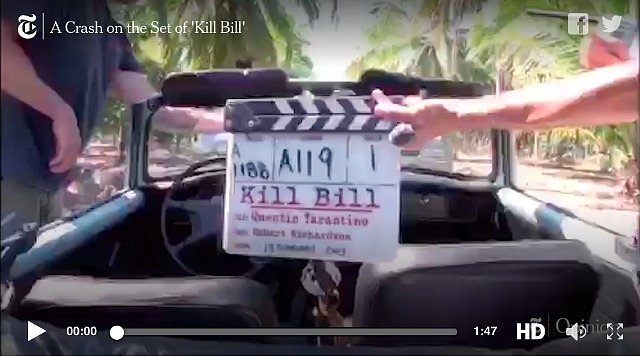 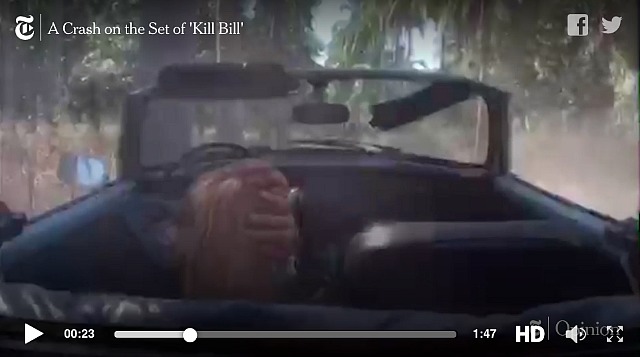 “I approached Quentin in very serious terms and told him that he had let Uma down as a director and as a friend,” he tells Dowd. It was like “Hey, man, she is great actress, not a stunt driver, and you know that.” Hawke added that the director “was very upset with himself and asked for my forgiveness.”

“Two weeks after the crash, after trying to see the car and footage of the incident, Thurman had her lawyer send a letter to Miramax, summarizing the event and reserving the right to sue. Miramax offered to show her the footage if she signed a document ‘releasing them of any consequences of my future pain and suffering,’ she says. She didn’t.

“Thurman was in ‘a terrible fight for years’ with Tarantino, she says. ‘We had to then go through promoting the movies. It was all very thin ice. We had a fateful fight at Soho House in New York in 2004 and we were shouting at each other because he wouldn’t let me see the footage and he told me that was what they had all decided.’

Last night Darkest Hour‘s Gary Oldman, a lock for the Best Actor Oscar if there ever was one, did 90 minutes on-stage with Leonard Maltin. The specific occasion was a presenting of the SBIFF’s Maltin Modern Master Award, the festival’s highest honor, and it was like a coronation. The generic thing when you host one of these SBIFF tributes is to prostrate yourself and worship the honored guest like he/she is a combination of emperor, genius and living God, and Maltin did that, all right.

“You’re perfect, Gary…everything about you is wonderful, and it gives us such pleasure to celebrate that. Allow us to kiss the ring.”

What I’m saying, obviously, is that I wish these tributes could be a tad less kiss-assy and a little more like those witty, erudite 90-minute discussions that Dick Cavett used to do with Katharine Hepburn and others, but you can’t fight City Hall. 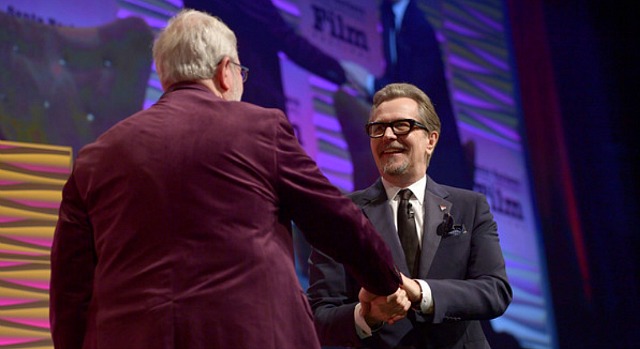 They had a conversation about Oldman’s pre-acting career (delivering milk in the wee hours, getting turned down by RADA at age 16) and so on. They also screened the usual clips. I was deeply disappointed that Oldman’s portrayal of Joe Orton in Stephen Frears‘ Prick Up Your Ears was ignored. I knew they’d show a Sid and Nancy clip and the famous one from True Romance when Oldman played a rasta-haired drug dealer who thinks he’s black…I knew it!

Oldman was unfailingly charming and gracious — he played the part that was expected of him. And Maltin, being Maltin, stayed away from every interesting side topic imaginable. He didn’t get within 10,000 feet of Oldman’s conservative beliefs and his disdain for political correctness. I respect Oldman for his atypical non-liberalism — it’s one of the things that makes him interesting, distinctive. But there was no way in hell Maltin was going to bring this up.

My other regret is that clip of Oldman dancing to “Get Up Offa That Thing” while in Winston Churchill makeup wasn’t shown — it would have been a huge hit! 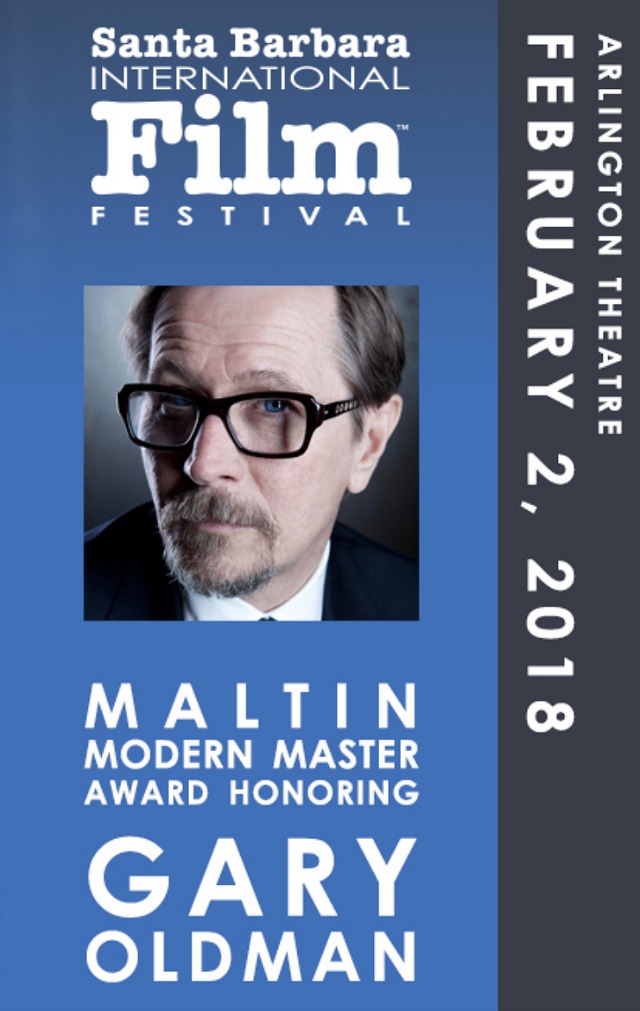