Support on Patreon Follow @wellshwood
124 Comments
Everything In Its Time

I have no problem with 98% of the responses to Black Panther being about representation and what a huge cultural moment it signifies, etc. These reactions are obviously valid. HE totally gets and endorses them as far as they go. But somewhere down the road people are going to eventually step back and address what various contrarians have been saying (like Jordan Ruimy), and perhaps even what I’ve been saying, which is that it doesn’t really find the groove until the last hour kicks in. But until that happens, no worries. 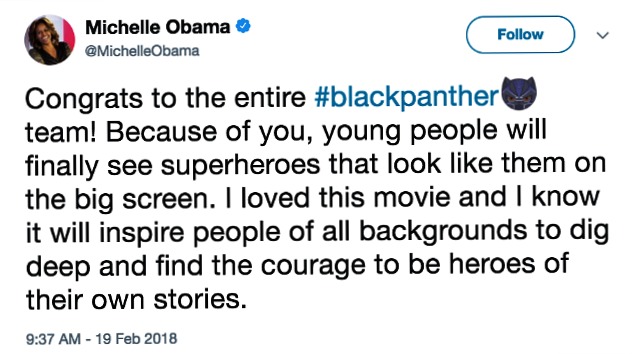 Posted on 11.24.16: Back in my Westfield days there was a big, dark-haired beefy guy named Bob Simon who used to give me all kinds of shit in junior and senior high. I hated him with a passion, and I seem to recall hearing a few years back that he’s dead. God’s grace!

I was once beaten by Simon in the back of a car on a trip back from Staten Island, where’d we’d go every weekend to get drunk as skunks. Admittedly I would act like an asshole after downing four or five cans of beer (“I’m a six-can man!” I triumphantly slurred one night) but that’s a side issue.

The animus between Simon and I began during 8th grade band practice. I played second trumpet; Simon was on the bass drum. During an attempt to perform a marching number, the headstrong music teacher (Mr. Buriss, called “Mr. Bur-ass” by some of his more spirited students) got angry with Simon for repeatedly missing a cue. He lost his temper, whacked his conductor’s stick on a metal bandstand, glared at Simon and blurted out “my God, man…you are thick!”

I told the guys in our peer group about the incident, and for the next few days “Simon, you’re thick!” was a thing. From that moment on I was on Simon’s shitlist. The goadings, humiliations and degradings were constant.

The Westfield high-school climate was hellish, no question. I suppose on some level it sharpened or toughened my game, but I think I suffered from a kind of PTSD for a couple of years after our family moved to Wilton, Connecticut.

I used to hitchhike everywhere in my mid to late teens, and people used to pick me up. There were times when I’d have to wait for 15 or 20 minutes but someone always pulled over eventually. Those were the days. The last time I thumbed a ride was ten years ago in Park City, and the only reason anyone stopped was because the Sundance Film Festival was on and I was wearing a press badge and my cowboy hat and I looked reasonably sane. Otherwise hitchhiking died…what, sometime in the late ’70s?

I was hitching north on Route 7 in Wilton, Connecticut. An old friend who was a girl (as opposed to a girlfriend) was with me, and dusk was starting to settle into night. The cars were whizzing by pretty fast (25 or 30 mph) but I was situated near a big gravel shoulder that made it easy to pull over. So I’m standing there and all of a sudden I was hit in my right shoulder…thunk. Like some boxer had walked up and punched me. It didn’t exactly “hurt” but definitely felt like a blow of some kind. I grabbed my shoulder and felt something gooey. And then chunks of something brittle, like potato chips or pieces of plaster.

There was a traffic light about 100 feet in front of where I was standing, and that’s surely where he spotted me from. A friend was driving, of course. They must have been shopping at a nearby supermarket.

Imagine how fast the shotgun guy had to react. “Look at that fucking guy!” He immediately dove over the back seat and reached into one of the grocery bags. He ripped open a carton of eggs, grabbed one, rolled down the passenger window and told the driver to slow down a tad. It’s not that hard to hit something from a moving car but you can miss if you’re not careful. Did he throw the egg like a baseball or did he do an underhand lob? Was he aiming for my head?

“The fuck…somebody just hit me with an egg!” I yelled. The girl who was a friend (i.e., Nancy) found this hilarious. Gales of laughter. I was mystified. Why would anyone do that? I was scraping the yolk and the gooey clear fluid off my jacket and throwing tiny gobs of it to the ground. Nancy couldn’t stop laughing.

From David Thomson‘s “New Biographical Dictionary of Film (Sixth Edition)“: “Sterling Hayden always looked shy of glossy stardom, more his own master than the smile-flexing Flynns and Powers. At his best, Hayden was solid, weathered and fatalistic: a taciturn, gangling John Hamilton, as calm as a Melville sailor who had seen great sights and was puzzled by the need to talk of them.

“Three times that placid strength was invoked: as the horse-loving perfectionist in The Asphalt Jungle (’50, John Huston); as the stranger in Johnny Guitar (’53, Nicholas Ray), deliberating over the operatic dialogue of that film; as the organizer in The Killing (’56, Stanley Kubrick), finally dismayed by the dollar bills winnowed in aircraft slipstream.”

Originally posted on 11.14.10: “A Wiltonian whom I came to know in the late ’70s, Hayden was a fascinating, hungry, obviously vulnerable fellow, insecure and ridden with guilt about naming names in the ’50s, jolly or surly depending on the time of day, very singular, a great contentious bear of a man, always the thinker, certainly a poet or a man trying all the time to be one, a man of the sea and a boy in some ways.

“There are the rote facts of life, the plain material truth of things, and then there are the currents within. The singing angels, the demons, the fireflies, the banshees, the echoes, the dreams…the vague sense of a continuing infinite scheme and how we fit into that.

Possibly the best sentence I’ve ever written: “We all define our lives as a constant mixing of these two aspects, but the charm and final value of a person, for me, is about how much he/she seems to be dealing with the interior world, and how much he/she comments and refers to those currents and laughs about them, and basically lives on the flow of that realm.

A day or two ago HE’s own Kim Morgan visited the two-story Kensington residence of Alfred Hitchcock and Alma Reville, at 153 Cromwell Road. 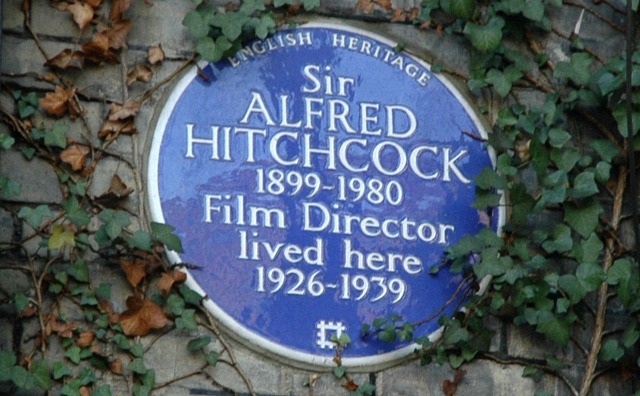 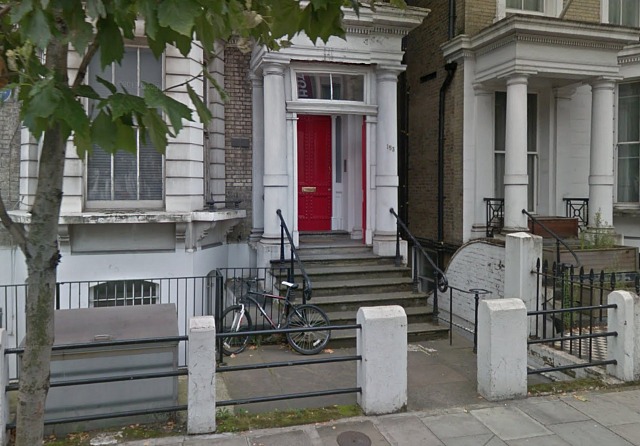 I wouldn’t live there myself — noisy traffic, too many hotels. I’m more of a Russell Square type of guy, or, if you want to be really precise, the corner building at 16 Bedford Way. Has anyone ever strolled around Russell Square on a moderately cool fall day? God lives there.

I would also be okay with living at George Smiley‘s townhouse at 9 Bywater Street in Chelsea.

If you were young when Reality Bites opened on 2.18.94, or exactly 24 years ago, you’re presumably aware that whatever qualities you had that were nervy and attuned and extra-potent in the early Clinton era…well, you know. Time is a killer or at least a diminisher. Everything fades, hairlines recede, midsections spread. The Millennials have already made way for Generation Z. You’ve presumably moved ahead in your field but biologically speaking you’re in the middle of the line, slightly ahead of GenX. Yeah, the boomers can go fuck themselves

Life is generally cruel but especially so in the film industry, and the brutal fact is that two of the principals in this scene are still kicking and thriving but a third is…well, doing okay.

Winona Ryder, who seemed to make a kind of comeback in Darren Aronofsky‘s Black Swan (’10), was around 22 when Reality Bites was filmed. She’d been a brand-name actress since Beetlejuice and Heathers popped in ’88 and early ’89, when she was 17 and 18. She was great opposite Daniel Day Lewis in Nicholas Hytner‘s The Crucible (’96) but things haven’t been the same since the ’01 shoplifting thing and the four-year-hiatus that followed. She’s doing fine today, but the peak years are memories in a jar.

Ethan Hawke, whose hair is now streaked with gray and whose physique has become pudgy, is my idea of a creatively thriving indie-god hyphenate. His most recent directorial effort was the Sundance ’18 hit Blaze. Hawke is a pusher and a puncher, and seemingly tireless. That final argument scene with Julie Delpy in Richard Linklater‘s Before Midnight (’13) was legendary. He was superb in in the 2004 off-Broadway stage production of David Rabe‘s Hurlyburly and staggering in the ’06 Lincoln Center production of Tom Stoppard‘s Coast of Utopia trilogy, which I saw with Santa Barbara Film festival honcho Roger Durling.

52 Comments
With Bells On

Hollywood Elsewhere will tramp, tramp, tramp and chant, chant, chant for the Los Angeles version of the nationwide MARCH FOR OUR LIVES demonstration on Saturday, 3.24. Local organizers haven’t gotten their act together yet — they haven’t even launched a Facebook page — while Sacramento and Santa Cruz are already up and rolling. Slackers.