Samantha Geimer, the once-young victim in the Roman Polanski rape case of 1977, has a WordPress blog called “The Girl”, which addresses this or that hot-button issue. Earlier today she tore into the Academy of Motion Pictures Arts & Sciences for stripping Polanski of his Academy membership over this 41-year-old matter, calling the decision “ugly and cruel”. She also told Vanity Fair‘s Rebecca Keegan that the Academy elites behind Polanski’s expulsion are “douchebags.”

Meanwhile back at the ranch, Polanski attorney Harland Braun has told VF that the 84-year-old director will appeal the Academy of Motion Picture Arts and Sciences’ decision to give him the heave-ho. “We want due process,” Braun said. 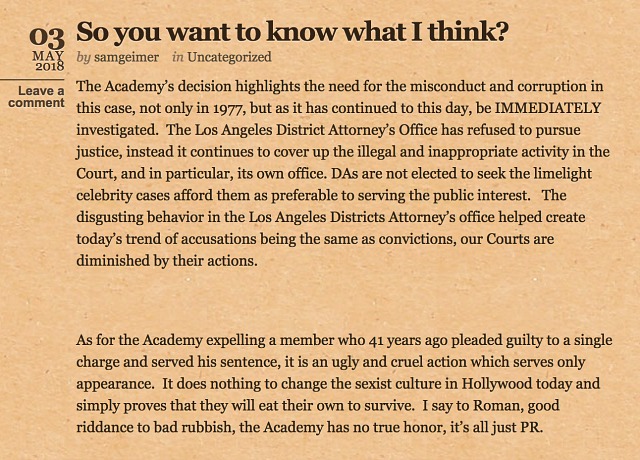 I’ve trashed Alexander Moors‘ The Yellow Birds two or three times since I caught it at Sundance ’17. It’s a reasonably intelligent PTSD drama (i.e., Iraq), but it’s slow and never lifts off and I wound up kinda hating it for the most part. If you ask me Alden Ehrenreich sinks it singlehandedly with his sullen, all-but-unreadable performance as a veteran with a gnawing secret.

The two best things about it are the performances by Toni Collette and Jennifer Aniston, as distraught mothers of Ehrenreich and costar Tye Sheridan‘s characters.

After months of silence and invisibility, The Yellow Birds has finally delivered a trailer. It’ll be released exclusively on DIRECTV between 5.17 and 6.13; Saban Films will open it theatrically on 6.15.

Based on a 2012 novel by Iraq War veteran Kevin Powers, it’s about the investigation of the death of an Iraq War combatant named “Murph” (Tye Sheridan), but is more precisely about evasions and suppressions on the part of Murph’s PTSD-aflicted comrade, John Bartie (Ehrenreich), when he returns home.

I for one sat in my Eccles seat in a state of numb submission, toughing it out and waiting for something (anything!) interesting to happen. Paul Haggis‘ In The Valley Of Elaah (’07), which uses a similar plot and mood, is far more compelling.

UCLA film professor Howard Suber gives great commentary — sage, smooth, learned, insightful. (Here are a few HE posts about the guy.) Roughly 30 years ago I was especially taken with a commentary track he recorded for a Criterion laser disc of High Noon. Suber persuaded me that this 1952 allegorical western, directed by Fred Zinneman and ghost-written by CarlForeman, was more than just a good sit or a striking reflection of Hollywood cowardice in the face of anti-Communist fervor, but one of the all-time greats.

Last night Suber announced that his High Noon commentary is now accessible (along with the film itself) on the Criterion Channel via Filmstruck. Never before offered on Bluray or DVD, and definitely worth it…trust me.

It’s not about the Old West, obviously — it’s a metaphor about the Hollywood climate of the early ’50s — but it walks and talks like a western, and is angry, blunt, honed and unequivocal to that end. It’s about the very worst in people, and the best in a single, anxious, far-from-perfect man. I’m speaking of screenwriter-producer Carl Foreman, who was being eyeballed by the Hollywood right for alleged Communist ties when he wrote it, and receiving a very tough lesson in human nature in the process. He wound up writing a crap-free movie that talks tough, cuts no slack and speaks with a single voice.

Take this with a grain, but a day or two ago there was a Los Angeles screening of Alfonso Cuaron‘s Roma, and a fellow confides that a person he trusts saw it, and that their reaction was “wow wow wow wow WOW WOW OH MAMA…yesss!!!” Seriously, they said that Cuaron’s black-and-white Mexico City family drama, set in the early 70s, is “beyond great.” And to think, we’d all be seeing it in Cannes next week if not for the Netflix brouhaha. Thanks, guys!

Actions have consequences but…

“The Academy of Motion Picture Arts and Sciences’ Board of Governors met on Tuesday night (May 1) and has voted to expel actor Bill Cosby and director Roman Polanski from its membership in accordance with the organization’s Standards of Conduct. The Board continues to encourage ethical standards that require members to uphold the Academy’s values of respect for human dignity.”

My only comment, which I shared with a friend, was “did they really have to couple Polanski with Cosby?”

To which she replied, “Rapist, rapist. It’s how the Academy sees it and all of the shrieking mob chasing after them.”

And I said, “Okay, but Cosby’s criminality was far more odious. Decades of persistent, diabolical and premeditated rape with the use of sedatives and Mickey Finns. Polanski wasn’t on that level. Not even close.”

Yesterday Netflix CEO Reed Hastings expressed a modest mea culpa about his company’s Mexican stand-off with the Cannes Film Festival. What he said, boiled down: “We’re still not bringing Alfonso Cuaron‘s Roma, Paul Greengrass‘s Norway or Orson Welles‘ The Other Side of the Wind to the festival, but we’re kinda sorry we let things get so heated and…uhm, well, that’s it. Maybe next time.”

Actual Hastings statement: “At times we have a reputation as a disruptor, and sometimes we make mistakes. I think we got into a more difficult situation with the Cannes Film Festival than we meant to because, you know, we’re not trying to disrupt the movie system, we are trying to make our members happy. We make our content for them. We love the film festival and we still have buyers going. The festival is very sincere in trying to find a model that works for them and works for us. I’m sure over time we’ll definitely [go back].”

The idea was to make a bullshit action fantasy in the vein of Guy Ritchie‘s King Arthur: Legend of the Sword (’17). Why I can’t imagine — Ritchie’s film was awful, and only made $148 million worldwide. Nonetheless, here it is. Anyone who finds this shit entertaining needs psychological counseling. Summit will release Robin Hood on 11.21.18.