Legendary deep-drill novelist Philip Roth has passed at age 85. We should all live lives as full of challenge and satisfaction, torment and triumph as Roth’s. Respect, condolences.

“These days Roth is writing about the approaching finale, about humbling, about everyone dying around him. I guess this is why he’s let himself be profiled by an American Masters doc. He’s figuring it’s now or never. He’ll turn 80 on 3.19.

“I have to be honest — I’ve only seen half of Philip Roth: Unmasked. I was enjoying it but I was tired or something. It’s a 90-minute portrait in which Roth riffs on his life and art ‘as he has never done before,’ the copy says.

“The crux of this plainly observed and illuminating documentary, centered on filmed interviews with the novelist that are organized into a loose biographical portrait, is a classic story of personal and artistic self-discovery,” New Yorker critic Richard Brodywrites. “[This began] with the thirtyish writer’s recognition, nearly half a century ago, in the company of a new group of like-minded friends in New York, that his round-table comedic voice was entertaining and therefore needed to be channelled into his work.

“The result, of course, was Portnoy’s Complaint, one of the key literary works of the sixties, which also made Roth famous. In much of the discussion that follows, he explains how he dealt with his new public persona — and how he transformed his experiences into fiction.

Aster’s low-budgeter, which starts out in a sensible, unforced fashion before flipping the crazy switch around the halfway mark and going totally bonkers (and I mean that in the best way imaginable), is quite the brilliant horror-thriller. You can tell right away it’s operating on a far less conventional, far more original level of craft and exposition than a typical horror flick, or even an above-average one.

The best portions recall the classic chops of early Roman Polanski (particularly Repulsion and Rosemary’s Baby) as well as Jack Clayton‘s The Innocents, but I was just as impressed by the performances — three, to be precise — as the shock-and-creep moments, and that’s saying something for a ghost film. 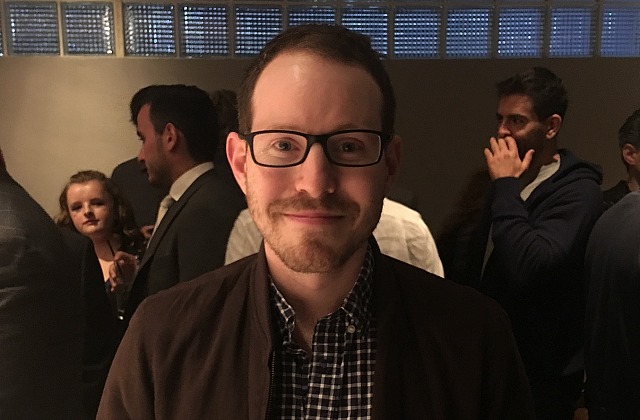 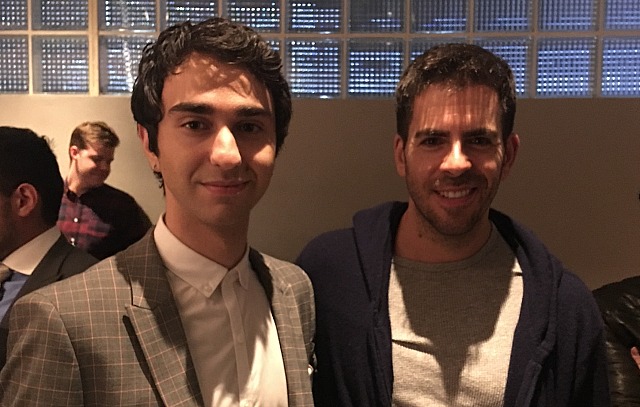 Hereditary begins as a suburban-milieu film about a family of five that’s just become a unit of four. Odd flickerings of weirdness begin to manifest, but nothing you can point your figure at. And then the number drops to three, and then the spooky-weird stuff kicks in a bit more. And then it goes over the fucking cliff.

The film is carried aloft and fused together by Toni Collette‘s grief-struck mom, Annie. It may be Collette’s most out-there performance ever. It’s certainly her most boundary-shattering in terms of connecting with the absolute blackest of currents. Collette convinces you that her character isn’t suffering a psychotic breakdown of sorts, that she’s going through her torments because it’s all 100% real, and at the same time allows you to consider that she has gone around the bend. Or that we may be watching a metaphor for the tortures of grief-driven insanity.

As the narrative advances Annie becomes more and more nutso, but relatably so. That’s quite the acting trick.

Nearly as effective is Alex Wolff as Peter, Collette’s guilt-crippled teenage son, and Ann Dowd as Joan, a kindly and sympathetic woman who meets Collette at a grief-therapy group. Gabriel Byrne is a little morose as Steve, Annie’s husband. The curiously featured Milly Shapiro is fine as Charlie — Peter’s younger sister, Annie and Steve’s daughter.

From Frank Scheck’s 3.2.18 Hollywood Reporter review: “The documentary, co-directed by Jane McMullen and Leo Telling, brings out the infuriating ‘see no evil, hear no evil, speak no evil’ complicity of those who were aware of Weinstein’s behavior but did nothing to stop it.

“Paul Webster, a former Miramax executive giving his first television interview, says, “Working at Miramax was like being in a cult. The cult of Harvey. I knew I was making a deal with the devil.” He adds, “I think, looking back, that I did know. And I chose to suppress it. I think we were all enablers.”

“[Weinstein is] a terrific documentary, which does an excellent job of summarizing the events in a concise 52 minutes. But there’s one big problem: It’s not long enough. To fully chronicle the massive scope of its subject’s alleged crimes you’d need nothing less than a miniseries. In fact, a limited series. Make that a full season.”

HE reminder: Solo pops in two days. The second half is okay but don’t expect too much. I never felt turned on or lifted up or caught up in the flow of the thing, and I’m saying this as someone who half-enjoyed The Force Awakens, felt mildly engaged by Rogue One and was half-taken by portions of The Last Jedi. I just couldn’t respond any more. I couldn’t take the plunge.

Alden Ehrenreich does a relatively decent job of pretending to be a youngish, much shorter Han, and if you want to go along with this charade, be my guest. But there’s no eluding the fact he’s nowhere close to being a chip off the old block. There’s a moment when Ehrenreich, listing his strategic attributes to Woody Harrelson, says “I’m a driver”…and I almost said out loud, “Yeah, of a fucking Prius!”

I felt hugely bored and irritated during the first hour, which is all about adrenalizing the ADD crowd with the usual Star Wars distractions — Han-in-big-trouble, Han-escapes-trouble, Han drives like a bat outta hell, the usual derring-do, high-speed chases, pulse-weapon battles, skin-of-their-teeth escapes…wow, wow, wow, wow…nothing.

Solo finally shifts into gear with the arrival of Donald Glover‘s Lando Calrissian and the Millennium Falcon, and especially when the Kessel Run smuggle plan kicks in and yaddah-yaddah. But Han doesn’t get behind the controls of the Falcon until the 90-minute mark. And then the film keeps going for another 40 minutes — it should have ended at the two-hour mark already. Plus I honestly lost patience with Harrelson and Emilia Clarke’s characters pulling last-minute, character-shifting switcheroos. Plus the big poker game in which Han wins the Falcon happens at the very end, almost as an afterthought.

For the 37th time, in order of preference:

1. The Empire Strikes Back (’80). Far and away the most handsomely captured Star Wars film (the dp was Peter Suschitzky) until The Last Jedi (shot by Steve Yedlin) came along. The darkest and finest Star Wars flick because it’s essentially a noir, and because the story points are all about losing, which is totally against the formulaic grain of all fantasy and superhero flicks. Lose, bruise, run for your life. The heroes get chased, kicked around, outflanked, betrayed, ambushed and barely survive. Luke convulsed by self-doubt, losing his right hand in a light-saber battle, horrified by a revelation about his lineage. Han being captured, tortured and put into carbon freeze. Guts but no glory, wounds, pain, “there’ll be another time.”

2. Star Wars (’77) is entirely satisfying for what it is and occasionally quite special, but why is it I haven’t re-watched it in several years? Because it’s nowhere near as good as Empire and I just can’t seem to find the time.

Asked by Time Out‘s Phil de Semlyen if he ever lost any roles due to being openly gay, Ian McKellen recounts the following: “One. Harold Pinter wanted me to be in a film of his [1983’s Betrayal] and he took me to meet the producer, Sam Spiegel. We sat in Spiegel’s office and I happened to say that I was going to New York. He said, ‘Will you be taking the family?’ And I said, ‘I don’t have a family…I’m gay.’ I think it was the first time I came out to anyone. Well, I was out of that office in two minutes. It took Pinter 25 years to apologize for not sticking up for me.”

The part that McKellen would have played, of course, was Ben Kingsley‘s — i.e., Robert, the publisher-cuckold. Kingsley was excellent — it’s my all-time second favorite of his, right after Don Logan — but McKellen would have absolutely killed. If I’d been in McKellen’s shoes that day in Spiegel’s office, I would have said “I don’t have a family” and left it at that. Then he would have delivered a great Pinter performance that would last and last forever. A shame.

There are brilliant X-factor horror flicks — John Krasinski‘s A Quiet Place, Robert Eggers‘ The Witch, Jennifer Kent‘s The Babadook, Andy Muschietti‘s Mama (but not It) and now Ari Aster‘s Hereditary — and there is the pig trough of horror-genre films.

Either you get what serious, classy, smarthouse horror films are up to, or you don’t. Either you understand that when a certain scare switch is flipped by way of hint, suggestion or implication (such as that little-ping moment in Rosemary’s Baby when Mia Farrow reads the journal of a recently-deceased victim of Roman and Minnie Castevet and comes upon the phrase “I can no longer associate myself…”), it connects with convulsive, deep-rooted terrors that are far more disturbing than anything you might find in It.

Not to paint with too wide a brush, but horror-genre fans tend to be on the coarse and geekish side in terms of their preferences. They’re basically about a general opposition to subtlety or understatement of any kind. Which is not to imply that Hereditary errs on the side of understatement. It certainly doesn’t during the second half. But the first half is almost a kind of masterclass in how to deliver on-target chills and jolts through fleeting suggestion rather than the usual sledgehammer approach.

In her 1.30.18 review of Hereditary, The Verge‘s Tasha Robinson wrote while Ari Aster’s film had been praised by Sundance critics as shocking and terrifying, there was nonetheless “some skeptical backlash from horror fans who felt burned by similar advance praise for films like The Witch and It Comes At Night, two extremely tense horror films in which not a whole lot ultimately happens.”

Robinson was dead serious. She really and truly felt that some horror fans (including herself?) felt “burned” by The Witch. Words fail.

From my 2.15.16 review of The Witch: “This is easily the most unsettling and sophisticated nightmare film since The Babadook. That’s a roundabout way of saying that the dolts who pay to see the usual horror bullshit will probably avoid it to some extent. Insensitive, all-but-clueless people tend to favor insensitive, all-but-clueless movies, and I’m sorry but The Witch is mostly too good for them — too subterranean, too otherworldly, too scrupulous in its avoidance of cliches. And because it goes for chills and creeps rather than shock and gore.”