I know I’m expected to be a Marvel hater, but I’m totally tuned into this July 6th release. I loved the original Ant-Man, and I fully expect to have a great time with the newbie. By the way: Michelle Pfeiffer has a role as Janet van Dyne — wife of Hank Pym (Michael Douglas), mother of Hope (Evangeline Lilly) and the original Wasp. Lost in the “quantum realm” years ago during a mission with Pym years ago, but presumably returning. Where could Janet’s head be after being all alone in some nebulous micro-realm for God knows how many years?

A woman you’ve just met can find you extremely handsome or fetching or fuckable, but you can’t be of the same opinion. You’ve been looking at yourself for too long, and you’re all too aware of the fears and anxieties and unsettling undercurrents that lie beneath those facial features. I applaud anyone who would say they’re completely pleased or at least at peace with their face because it conveys a good attitude — accept yourself and your life thus far without guilt or judgment, and keep the door open for better chapters around the corner. This is how I see myself, and so I completely get what Isabelle Huppert was saying when she said there’s “nothing” about her appearance that bothers her. She’s lying, of course, but in a healthy way. 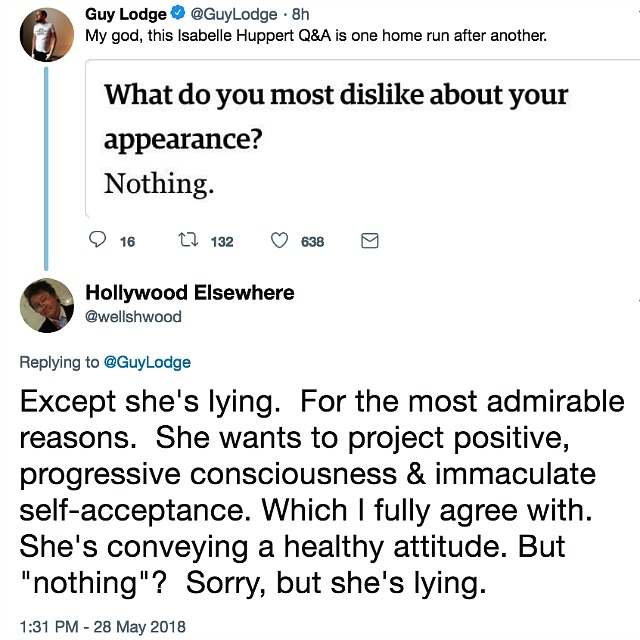 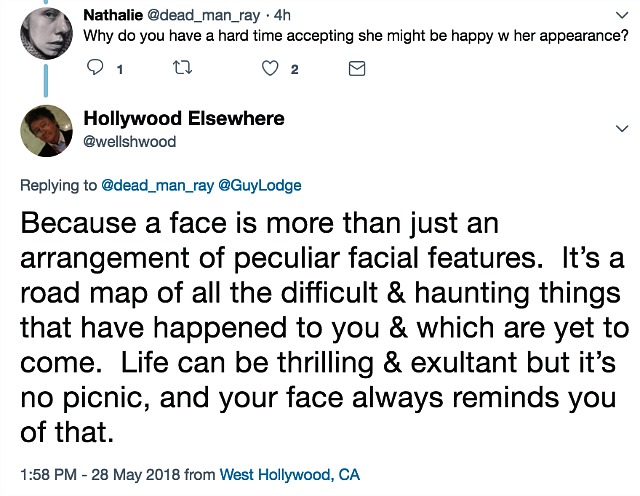 History has noted a fair number of female criminals and desperadoes (Bonnie Parker, Ma Barker, Belle Starr, Ulrike Meinhof, Sandra Avila Beltran, Phoolan Devi, Griselda Blanco, Shashikala Patankar, Seema Parihar) over the decades, but has there ever been an upscale, John Robie-styled female thief of any kind? More to the point, has there ever been a gang of women thieves? Or a female gang of any kind who joined forces to commit a major crime?

Lord knows there have been dozens of male gangs who’ve attempted this or that robbery, but to my knowledge women have never done this, not even once. If this presumption is in fact true, the natural question is “why not?” There have been loner lady outlaws over the decades, as noted, so why has there never been a gang of them? Update: Apologies — I’d overlooked Forty Elephants.

Conclusion: It would seem that in today’s context, no offense, that Ocean’s 8 is a masturbatory, patriarchal-pushback, Hollywood wish-fulfillment fantasy from the get-go, completely divorced from human behavior as observed and recorded by 20th or 21st Century journalists, historians and crime novelists. If I’m wrong, please inform.

I’ve been encouraged by the complaints about Solo‘s overly-dark cinematography, which of course is the doing of Bradford Young, the most somber and pea-soupy cinematographer on the planet. In other words, popular opinion seems to be catching up to mine, and from here on people will be “on” to Young…good! It needs to be understood that Young’s murky palettes are markedly different than the pitch-black shadow stylings of the late Gordon Willis, the legendary “prince of darkness” whose work I’ve long admired. 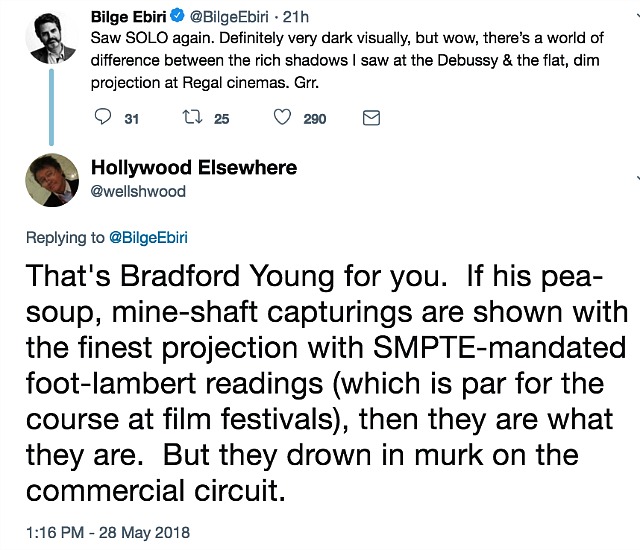 Last night I gave Hail Caesar! another shot. Having expressed my initial disappointment 2 and 1/3 years ago and moved past that like any sane person, I thought I might somehow see this period Hollywood “comedy” (i.e., one that’s actually funny in only one or two scenes) in a more approving light.

Alas, it wasn’t to be. As well-made, well-acted and handsomely designed as it obviously is, I still felt irked and underwhelmed. My re-viewing wasn’t boring. It’s still diverting in several portions (Channing Tatum‘s dance number, Aldren Ehrenreich‘s “would that it twuhhh” scene with Ralph Fiennes) but it feels oddly thin and scattershot.

Has anyone watched it again and felt differently?

I’m still hugely peeved at the Coen’s aspect-ratio wrongo. Two or three clips are screened within the film, and they’re all presented in CinemaScope-like widescreen, which of course didn’t appear until 1953 with The Robe and didn’t really kick in on a mainstream basis until ’54. Hail Caesar is happening in ’50 or ’51, given the obvious allusion to Quo Vadis. The fact is that all movies were shot and projected at 1.37 back then so we’re talking an aspect-ratio boner of stunning proportions. Unforgivable.

From my 2.3.16 review: The smarty-pants dialogue has verve and flair. The attitudes, haircuts, costumes and production design are all aces. Pic has many elements, in fact, that are sharp and zippy and loads of fun, but something is missing. Yes, if you ease up on your Coen Bros. expectations Hail, Caesar! is agreeable enough. It’s not slop and far from a trainwreck, but at best it’s a 6.5 or 7. Amusing here and there but never consistently funny in a follow-through, momentum-building sort of way.

Remember the inspired “Wheezy Joe” bit in Intolerable Cruelty (i.e., the gun mistaken for an inhaler)? There’s nothing in Caesar that comes close to that. If you ask me Inside Llewyn Davis — by any yardstick a downish, somber-attitude film — is funnier in its own studied way. John Goodman‘s back-seat performance as a junkie musician was a stone classic; ditto that “where’s his scrotum?” scene plus the moment when the amiable G.I. folk singer slurps the cereal milk. There are no bits or performances in Hail, Caesar! that deliver on this level.

Hail, Casear! is about real-life MGM general manager and vp Eddie Mannix (Josh Brolin) and how he deals with the kidnapping of Baird Whitlock (George Clooney), a Robert Taylor-like star during the filming of a Quo Vadis-like Biblical epic called Hail, Caesar!: A Tale of the Christ.

Ethically, philosophically and attitudinally I am a daily contradiction — a war of opposing viewpoints contained in the same vessel. While I despise default bumblefuck attitudes (pro-Trump, stop the multicultural hordes from overtaking “our” country, lefties are Godless politically-correct Stalinists) with all my heart and soul, I also occasionally find myself sympathizing to some extent with these doofuses. Not “agreeing” with them as much as understanding why they feel as they do. And on a certain level of horrific premonition I’m feeling very, very scared about what might happen two years hence.

Having just watched the Munk Debate on Political Correctness and White Privilege, I am strongly sensing that the vast majority of Average Joes agree more with Jordan Peterson (“12 Rules For Life: An Antidote to Chaos“) than they do with the brilliant Michael Eric Dyson, who called Peterson “a mean and mad white man” during that recent Toronto encounter. [The rant begins at 5:15 and ends at 8:12.]

Somehow Peterson has become a kind of poster boy for pushback against the radical p.c. left in the name of calmness and common sense. And yet when Peterson asked how he was supposed to react to being perceived as a much-loathed white-privilege person, Dyson maintained that Peterson “isn’t suffering from anything except an exaggerated sense of entitlement and resentment.”

What I’m terribly afraid of is that two years from now there may be enough Average Joes in swing states who will be so turned off by the aggressive p.c. judgments and admonitions of the progressive left that they may once again vote for the most demonic and rabidly sociopathic crime-family President in this country’s history just to spite the left, even though they may agree that Trump’s authoritarian attempts to dismantle democracy have become truly horrifying.

In short I am scared shitless that in defiance of all common sense the schmoes will wind up hating the left more than Trump. Average Joes are generally furious at the idea of all white people being told to hang their heads in shame for a history of inherent genetic venality.

I for one am in the Bill Maher camp about Peterson. I believe that the levels of intimidation and career ruination at the hands of the progressive left have become ferocious and in some cases too extreme, and that standing by free speech means you should be down with the idea of occasionally giving offense in a debate. I’m just sensing that things have tipped into a kind of madness and that swing-state voters are sensing this also, and that this may become a factor in the 2020 election. I really hope it doesn’t. God help us if it does.