34 Comments
How Whompa Is “First Man”? How Phil Kaufman Is it?

49 years ago NASA did everything they could to minimize the drama, the tension and the risk factor of the first manned landing on the moon. They talked about it like it was a complex dental procedure or maybe something a little gnarlier. Even Norman Mailer‘s book, “Of A Fire In The Moon,” delivered a vaguely dull feeling. Now comes Damien Chazelle‘s First Man (Universal, 10.12), and of course he’s done everything he can to emphasize the drama, the tension and the risk factor. I’ve got the script on my Macbook Pro; reading it soon.

Put-put-putting down the Hoi An river and the memories that go with that — the warm air, the foodie aromas, the magic-hour light, the hornet sound of scooters, the laid-back tropical vibes…for some reason all of this reminds me of Anthony Bourdain, who was alive and well and doing great when this video was shot five and a half years ago, or in November 2012. Vietnam was — always will be — the biggest thing I had in common with the guy. I wept a little today.

I’ve previously explained the basic idea with “Il Foro Romano“, which will launch along with the rest of HE:(plus) later this month. I’m opening it up to any trusted HE regular who wants to post anything they choose — a tweet-sized thought, a three-paragraph riff, a link to an important article with a side comment, a rumor that sounds half-credible, a complaint about something that posted on another site, anything at all. I’ve already spoken to a couple of HE pallies who will be posting when the mood strikes, but I want this option open to several potential contributors. (I offered access to LexG, but of course he didn’t reply.) I guess you could call “Il Foro Romano” a kind of community bulletin board. If you want to post with some regularity, get in touch (gruver1@gmail.com) and we’ll talk it over and if it feels right I’ll give you the login info. Just understand that if you post anything that’s icky or idiotic or gross you’ll be immediately deep-sixed.

Last night George Clooney was honored as the recipient of the latest AFI Life Achievement Award. Hosannah and salutations — we all know the drill. Speaking entirely for myself and my own sense of how things ought to be, George is my idea of a good and gracious fellow, smart and savvy and entirely decent in every way that could possibly apply. He has always been nice to me, always polite and obliging. So nice that it pained me when I had to pan Monuments Men. I wanted to give it a pass but I couldn’t, and it hurt.

I consequently laughed when I read a Jimmy Kimmel anecdote in Anne Thompson’s story about the show. “Kimmel snuck in a raw note of truth when he lambasted [Clooney’s] Leatherheads and The Monuments Men,” she writes. “‘[The latter] was so bad it had me rooting for Hitler,’ Kimmel said.”

For old time’s sake, here’s a reposting on my June 2013 visit to the set of Monuments Men, which only happened because good-guy Clooney okayed it:

A few weeks ago I paid a secret visit to the set of George Clooney‘s Monuments Men in Germany’s Harz mountains. It wasn’t on the level of Henry Kissinger‘s secret visit to China to arrange for Richard Nixon‘s 1972 state visit, but when Sony publicity told me to keep mum until after shooting wrapped on 6.26, I gave them my word.

Yes, I’d previously told HE readers I was doing it, but then I clammed up and pretended I’d never posted such a thing. My mother called from Connecticut to ask where I was. “I can’t say, mom,” I replied, “but I can tell you this much — I’m definitely not visiting a movie set.”

Based on Robert Edsel‘s “The Monuments Men: Allied Heroes, Nazi Thieves and the Greatest Treasure Hunt in History,” it’s basically about a bunch of caring wiseacres in fatigues and helmets saving civilization from ruin. Literally. By doing what they can to rescue or salvage tens of thousands of art treasures — mostly paintings — that have been stolen and freighted away by the Nazis.

Enlightened warriors, if you will. Guys who know that after World War II ends the quality of life on the planet earth will be seriously diminished if the great European art treasures have been hidden or destroyed. And so they’re out to prevent that with whatever maneuvers they can think of.

Clooney plays Frank Stokes, the leader of a ragtag group of art commandos…hold on, I’m giving the wrong impression here. This is not Ocean’s 11 in olive-drab fatigues or an art-appreciating Dirty Dozen or Kelly’s Heroes. Or is it? I don’t really know because a script is only a starting point, but I also know it’s not Schindler’s List. It feels more to me like a “movie” than a “film”, but that in itself might be inaccurate. I really don’t know what the fuck I’m talking about. 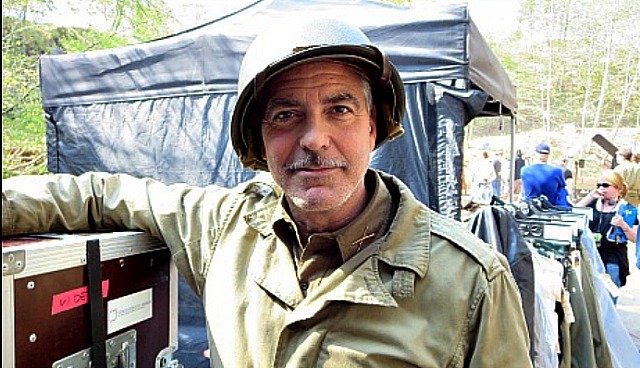 Posted three years ago: The realm of Only Angels Have Wings is all-male, all the time. Feelings run quite strong (the pilots who are “good enough” love each other like brothers) but nobody lays their emotional cards on the table face-up. Particularly Cary Grant‘s Geoff, a brusque, hard-headed type who never has a match on him. He gradually falls in love with Jean Arthur but refuses to say so or even show it very much. But he does subtly reveal his feelings at the end with the help of a two-headed coin. It’s not what any woman or poet would call a profound declaration of love, but it’s as close to profound as it’s going to get in this 1939 Howard Hawks film. If Angels were remade today with Jennifer Lawrence in the Arthur role she’d probably say “to hell with it” and catch the boat, but in ’39 the coin was enough. Easily one of the greatest finales in Hollywood history.

Not the actors, of course — the rural Pennsylvania characters they played. And not back then but now — 40 years older, grayer, heavier and hugely pissed off that the white America they grew up with is a thing of the past. There are very few films that I despise more than Michael Cimino‘s reprehensible, frequently nonsensical proletariat social drama, which I was initially impressed by in some respects (that awesome cutaway from a Pennsylvania wedding ceremony to the jungles of Vietnam) but hated in others. Russian roulette….bullshit. A loving tribute to rural ignorance and delusion that brought a tear to my eye…not.

Yesterday MSNBC host Nicolle Wallace asked whether First Lady Melania Trump and First Daughter Ivanka Trump were “dead inside,” given their support and submission to arguably the worst sexist dog to occupy the Oval Office in the nation’s history, not to mention the most craven, selfish and sociopathic.

The answer, obviously, is that they adore the material comfort aspects of their lives and so they’ve figured a way to “live with” or otherwise ignore the horrendous and malicious Trump policies, not to mention the Caligula-like appetites that would, at the very least, offend any wife or daughter to the very core of their beings.

It’s the same kind of accommodation that money whores the world over have adjusted themselves to for untold centuries. The humiliation that Julius Caesar‘s wife Calpurnia felt when her husband took up with Cleopatra was nothing compared to what Melania is dealing with.

I was gifted this morning with a two-year-old draft of Suspiria. The framework of Luca Gudagnino‘s upcoming film, it was authored by Dave Kajganich and based on the original 1977 film by Dario Argento, which was written by Argento and Daria Nicolodi. Guadagnino’s film is set in “the Berlin” that same year. I love the Joseph Goebbels quote, and can say that a certain World War II history is woven into the narrative.

I am stunned and appalled that Anthony Bourdain, a sensualist and an adventurer whom I admired like few others, a guy who adored sitting on a plastic stool and eating Bun Cha in Hanoi as well as scootering through rural Vietnam as much I have, a late bloomer who’d lived a druggy, dissolute life in the ’70s and ’80s but had built himself into great shape and had led a rich and robust life in so many respects…I am absolutely floored that Bourdain has done himself in.

Bourdain was right at the top of my spitball list of famous fellows who would never, ever kill themselves because he seemed so imbued with the sensual joy of living, who had found so much happiness and fulfillment in so many foods and kitchens, in so many sights and sounds and aromas and atmospheres, travelling and roaming around 250 days per year and inhaling the seismic wonder of it all.

In a perfect world Donald Trump would hang himself in his White House bedroom and Bourdain would go on living and travelling and taping episodes of Parts Unknown until he was 98 and perhaps beyond.

He apparently suffered from depression, or so it’s being said this morning. He was 61, and by all indications in the absolute peak of his personal journey. Like me, Bourdain’s life didn’t really take off until the late ’90s, when he was in his early 40s. But when everything finally fell into place and he became famous and semi-wealthy, he seemed to revel in the feast but without losing his head. He always kept his sanity and sense of modesty.

Bourdain had been in a long-distance relationship with Asia Argento, who made headlines at last month’s Cannes Film Festival when she gave a speech that tore into Harvey Weinstein and accused the festival elite for normalizing and covering up Weinstein’s misdeeds.

I am very, very sorry for Argento’s loss and everyone else’s, and I mean tens if not hundreds of thousands of followers and admirers.